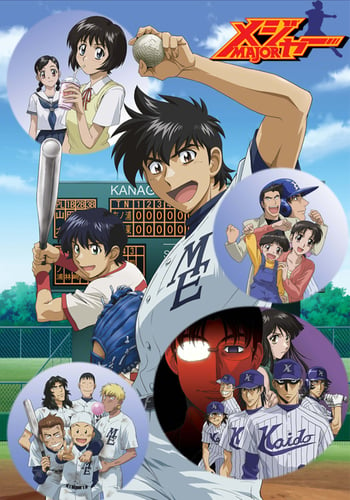 Major continues to ooze that all-important ‘awesome' factor, but the overall effect in this instalment is diminished slightly by a poorer plot structure than that of its predecessor. The story can pretty much be divided into three acts; the first sees a continuation of the status quo (Goro leads a gang of school kids to victory), the second and weakest act sees a series of tedious training exercises and what basically amounts to powerups, and the third provided a return to the triumphant energy of days past as actual game play took salience once more.

Season 2 represents an opportunity for Goro to test himself in new ways, at first as a leader and then later as an individual equal to other ambitious and talented players. However, whilst new opportunities presented themselves, some of the plot elements particularly in the first act felt very familiar i.e. bullies turn good through the power of Goro and baseball. Also, there was a distinct lack of emotionally harrowing challenges where Goro was concerned, which meant there wasn't that extra meaty layer to the story. Instead, we find Goro being tossed impossible physical challenge after impossible physical challenge only to coast through them because, well... he's Goro. However, his brilliant personality continued to shine through the less seductive plot, meaning I was hooked despite myself.

Sato Toshiya's subplot on the other hand had the most potential for emotional involvement and thus became the most interesting part for me. In the latter third of the series, as it got back on track, Sato's intelligent strategising combined with Goro's raw talent helped drive the plot in a far more powerful manner. To tell the truth, with this being only a part of Goro's continuing saga, the flaws weren't really that destructive. I found that the show still made an impact primarily through screwing up Goro's plans as often and as badly as it could - and undoubtedly the best thing about Major is watching Goro turn a nasty twist into a victory.

Major was never a stunning anime to look at, and any hopes I had of more budget being diverted to creating more beauty were utterly misplaced. Money was spent on making the animation look slightly crisper, but movement outside of baseball games were still only decent enough to be convincing. The total lack of detail in Major was glaring compared to a lot of other averagely-animated series; this season may not feel or sound like a child’s TV show, but it certainly still looks like one. On the other hand, the story and characters remained the focus, meaning the style in which they were presented to us was relatively unimportant.

Apart from the opening theme, the music was unremarkable; as with the first season, the tunes used during the scenes were basic accents for the mood. The opening theme was suitably energetic and catchy and had a similar sound to the opening theme of the first season. However, the two ending themes were simplistic pop pieces without interesting melodies. What carried this season in terms of sound was the voice acting. Goro stole the show again with his self-assured, cocky tone, but the rest of the cast also performed well. I felt all the voice actors had by now settled neatly into their roles and sounded like they could perform with their eyes closed.

Any fears I had that developments in this new season would ruin all the stunning work achieved in the first were easily put aside after the first episode - Goro has not wavered one fraction in his magnetism. There were occasions during the middle episodes, as he was trying out for Kaido, when his usual overconfidence bubbled over into arrogance. Here, the creators seemed to be more concerned with showing how cool Goro was rather than developing him as a person. He still helped his fellow rivals, he still gave encouraging speeches, but there was an invincibility to him that made it harder to sympathise. Luckily a return to actual baseball competitions in later episodes allowed him to walk the walk and thus smoothed the arrogant edge right back off again.

Sato played a prominent role in his own right here, which was one of the show's best ideas. He is the kind of player that uses his head more than his heart (although that doesn't make him a worse player than Goro). His passion is circumscribed by circumstances in ways that Goro's are not, and I thought this presented a more mature angle to the ‘aspiring ace' story. I found myself having blind faith in Goro but feeling far more empathetic towards Sato.

Some of the characters such as Oobayashi and the bullies in the beginning were transient, so that they were not developed as much as they could have been. Similarly, a host of new characters were introduced only halfway through, which also didn't give them much time to grow. I missed Shimizu's presence the most for the second half because it was getting interesting to watch her rather peripheral relationship with Goro blossom that little bit more. I also felt it was a shame that Goro's family life paled into the background, since it been a source of emotional struggle in the past. However, Goro and Sato's presence throughout and the development of their intriguing rivals-cum-friends relationship provided for engaging compensation.

Major S2 is one of the weaker instalments to date, mainly because the plot is not held together as well. Moreover, because this is a continuation or a transition of sorts rather than a radical new stage in Goro's life, there is a feeling of sameness rather than adventure about Major S2. What keeps the entire story going, however, and what keeps this particular season highly enjoyable, is Goro's inextinguishable, undisputable dynamism. No matter what he does, we still believe in him, and in the end, that is all that matters in this show.

Major Season 2. If you watched the first season, you definitely have to watch this one too.

At the beggining, we meet Komori, Shimizu and Sawamura, now older than in the first series. Then arrives Goro, who just moved back. He learns that East Mifune Middle School baseball is having hard times, and despite his injury from the past, he overcomes himself and helps. More interesting it becames when his opponent is Toshiya Sato, he himself having gone through hard times. And there's also Kaido - exclusive school for prominent atheletes. Who will join? Who will win? Goro or Toshiya?

I really liked the story. I guess it was one of the best stories in whole 6 series. It's kinda natural, although for someone who doesn't do sports it's a little unbeliaveble. But it is definitely something worth to see. Things happen, things you'd never thought that would happen, and nothing is easy.

Animation of second series definitely improved. In a really good way. It's much more smooth and really nice and so on. I liked it a lot.

I have to say that I really loved music. Opening, ending, soundtrack, everything. It was so good. It was great! Touching, fitting...simply great.

The main task of characters in this series is to tell us that even if they aren't kids anymore, they still aren't adults. They have changed, but in the end, their heart remained the same.

They are really good characters. You believe in them, you like them, you hate them,and you sometimes even uderstand them. Sometimes...not.