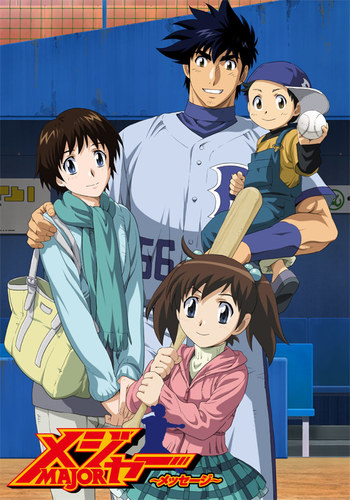 There are several reasons why Major: Message is no great work but they all boil down to one thing: it is an ending for ending’s sake. Symbolically, it’s apt, since a middle-aged Goro tries to pass on the love of baseball to his children by repeating the trials of his father. It bundles in a perfunctory game and plenty of montages to portray Goro getting stronger or acing tryouts. And though set a decade later, the usual characters are still milling about: Momoko, Shigeno, Komori, Toshiya, Taiga (nothing of Goro’s own siblings, though).

But it’s also too symbolic - token, in fact. All that heavy sentimentality masks a mere conveyor belt of events we’ve seen numerous times before. Goro is injured at the start and decides he’ll continue playing anyway in some other capacity. Conflict comes not in the form of a mighty professional opponent but his daughter Izumi, who would rather he get a normal job and be an attentive father. The first problem is that this instalment thereby fails substantively to be about baseball, that which gave the series teeth; the second is that it is all painfully predictable. In trying to say something worthwhile about a guy who peaked years ago by resorting to an overused plot device, this one-shot resembles a gaunt and tired cow being milked to within an inch of its life.

In some circles, ‘OVA’ means better animation, but not in Message’s world. It’s visuals  are of TV quality, if not slightly poorer. It offers nothing new, but also delivers no exciting games to show off what it can do.

Fans have heard this all before.

Cameos. Cameos everywhere. And with only twenty-four minutes running time, the secondary characters do no more than pop their heads around the corner to wave a cheery hello. Shimizu has become a supportive housewife with no strong opinions of her own and a bland smile for every occasion. After years of playing this role, she only ends up mattering less to the narrative than the kids who get to debut for five minutes.

That puts all the pressure on Goro as the sole person of note to make this show work. Even he manages only a listless retread of his previous performances. I’m uncertain whether the voice actor is bored of repeating himself for the nth time or whether Goro as a character has lost his special magic, but there is little conviction audible in his voice. Worse, his pig-headed attitude within a family setting seems inappropriate. It’s one thing subjecting a girlfriend to selfish decisions for six seasons - she is an autonomous person with the choice to leave. Playing around with children’s confidence just for dramatic effect is another thing entirely. Oh, there is an attempt to explain that he’s doing it for the kids, but how Goro has made it into his thirties without realising honesty is the key to a healthy relationship is mind-boggling.

This is Major on autopilot, monotonous and middling and played with about as much passion as the triangle section of an orchestra - but, hey, it is also short. Anyone desperate for a sense of closure to the franchise, even if it comes at the expense of entertainment, will find precisely that in Message.