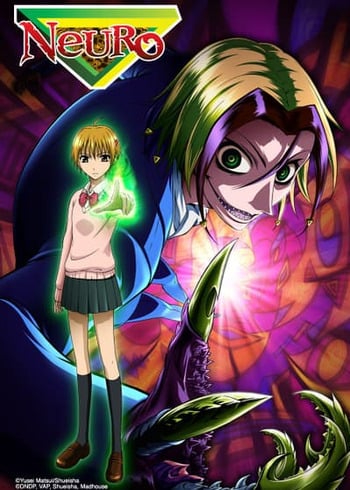 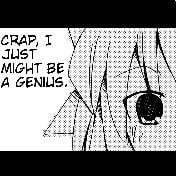 A while ago, I heard about the series "Majin Tantei Nougami Neuro", with Takehito Koyasu, one of my favourite seiyuu's, voicing the main character. I told myself I had to watch this series, even if it was bad - after all, I was still able to fangirl about his voice. Now I've finished the anime, I must admit, it was actually really fun and enjoyable.   STORY - 6 When Yako Katsuragi's father is found dead in his locked room, the police calls it a suicide, but Yako herself is convinced it was murder. When she meets Demon Detective Neuro, who came to the earth to solve and "eat" mysteries, she believes that he can help her solve the case of her dad. A Demon Detective who eats mystery? Isn't that a little far fetched? Hmm.... a little. But you'll get used to it. It takes a while before this plot really develops. The first, like, 15 episodes, all the episodes are typical detective episodes; a murder, serveral suspects, Neuro finds the culprit, the culprit turns into a monster (alright, that's a little different from the typical) and Neuro... eats the mystery . Although the most of these episodes are really predictable (just look at the suspects: the one who looks the strangest is pretty much always the culprit, after all, they turn into monsters at the end) it is kinda fun to watch. Probably because of the comedy. The story isn't one of the series greatest points, but if you like comedy and action, you will defenitely enjoy it. Don't watch it for the mystery though.   ANIMATION - 7 The animation of the series is fairly decent: the characters and background look good, and the movements are usually quite smooth. I did notice though that they often draw Neuro with 6 fingers instead of 5 (at first, I actually thought he had 6 fingers because he was a demon, but in the end I was mistaken: just animation-mistakes). Another something that bothered me, was that the characters sometimes look really weird during comedic moments; for example, the eye-popping and over-the-top expressions (watch the OP, you'll already notice some of it). This is not neccesarily a bad point though, a lot of people seem to find the look of it funny The animation of the battles with Sai really impressed me though. Wish there were more of them in the anime.   SOUND - 8 It doesn't happen often that I love both the OP and the ED. The opening single, called "Nightmare", is really catchy and got stuck in my head while I was only a few episodes into the series. The ending theme, "Kodoku no Hikari", I must admit, made me tear up when I listened to the full version after watching episode 10; a really beautiful but sad song, and even sadder when you know the "singer" is one of the characters. The voice acting was very good too; Neuro is voiced by Takehito Koyasu (like I said in the beginning), Yako by Kana Ueda (never heard from her before, but I really liked her voice) and Godai by Hiroyuki Yoshino (a.k.a. Kimblee from FMA Brotherhood and Ox Ford from Soul Eater. I had to look that up - his voice sounds really different in this one) There was one scene in the final episode of the anime *SPOILERS*, in which the voice-acting REALLY impressed me; the scene where Sai (voiced by Romi Park, a.k.a. Edward Elric) loses his memory again. There was so much emotion putted into it, it almost teared me up. CHARACTERS - 7.5 Although the characters aren't much developed, they have really charming personalities; I loved all the main characters. Neuro is sadistic and even though he's often very serious, he can be really funny at times, Yako is very cute and Godai cracked me up too. Didn't feel much for Sai, but I loved his voice.   OVERALL - 7 A predictable, but very enjoyable series; that's how I would describe Majin Tantei Nougami Neuro. Defenitely for people who love some good comedy.

This anime is not really easy to describe. At first you might think that it's just poor man's detective Conan, but I would describe it as a mix of Conan and Soul Eater.I started watching this anime by an accident, because i really liked the opening by Nightmare, the ending is boring though. The soundtrack is full of great and memorable tracks, but voice acting doesn't stand out except Neuro's. Now the animation seems weird and out of place at times, it's above average.Yako Katsuragi is a generic and useless main character and the only interesting thing about her is her appetite which puts Luffy, Lina Inverse and Chouji to shame.Now Neuro, that's some really awesome character, I already mentioned his voice and laughs, (he has the same VA as Excalibur!) but the best thing is that he's a sadistic psycho demon who eats people's souls full of mysteries and has over 777 awesome demonic weapons. Seriously, he's just a badass and rises my overall score by at least 2 points. Shinobu Godai is just an assistant who gets angry very quckly and drinks lot of beer. And Akane-chan? That's the weirdest anime character I've ever seen, she's just a ponytail!Eishi Sasazuka is a slightly apathetic but really cool and smart character and his assistant Jun Ishigaki is like a dumber copy of Matsuda from Death Note and then there's Yuuya Higuchi, a genius hacker who plays more important role in one later story arc.And the main villain is the "Phantom Thief" Sai who in fact, DOESN'T steal, but murders people and puts them in a red box, he's a fairly decent villain, but he'is nothing compared to Neuro.Other than them, most characters don't appear for longer than one episode or Arc, so I won't bother with describing them.The bad parts are the story. The story is weak and episodic and is set into mysteries where the culprit is alway obvious from the beginning. But because of simplicity there are a few plot holes. The first episodes may be a pain to watch, so if you take this as a mystery show it sucks (go watch Conan or even CSI instead), BUT as a shounen, it easily stands out among other fighting anime because it tries to be different and when it gets less episodic in the end it even becomes slightly exciting, even though the conclusion is open. There are also some really funny slapstick moments. Overall it is fun if you don't care about bad mysteries and don't take it too seriously.So should you watch it? Only if you're into shounen with some mysteries, otherwise you'll get bored.

OK so, the first thing that struck me while watching this was the sound of the voice acting. The acting itself is ok but the quality is kind of bad. You can almost hear the echo in the background as they talk which is weird. The show is a few years old so I wasn't surprised by the animation quality. I also quite liked the character designs. There were a lot of scenes/lines I found...cringeworthy. It's like the anime is trying to hard to be iconic with iconic lines, if that makes sense. The way neuro says "the mystery is at the tip of my tongue" or whatever is just eh, he says it every episode and it doesn't even sound cool. I have no complaints about Yako, she's adorable (it is weird that everyone ships her with Neuro though considering she's what, 16?) One thing I also found odd was the murder mysteries that they solve. You would think it would be a simple "The killer did this and this simple thing to commit this murder" but in the end the way they do it is just outlandish. Using a frozen tomato to hold up a dead body so that he looks alive? Who the fuck thinks of these things? Of course I haven't completely finished this show so I can't give an opinion on the ending yet. 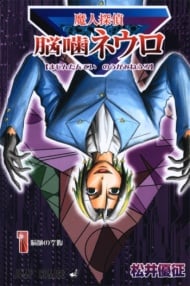