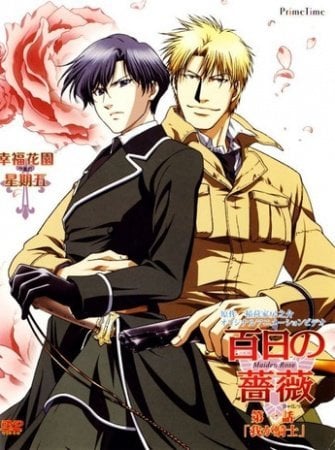 I've been reading reviews and I'm disappointed at the two opposites in opinnions: those regarding it as stupid, abusive and non-sense; and those perverts claiming the sex scenes are of the best they've seen. I differ from both and I believe there is more than meets the eye when it comes to Fusanosuke Inariya's works.

I had never heard of this anime before a friend of mine recommended it to me. I was sick of typical yaoi stories which had no serious plots and in which the characters were too plain and unrealistic, so I wasn't very sure about watching it at first.

I found the anime adaptation to be very different for that matter. The H scenes were very violent and the humilliation of Taki was something I'd only read in mangas so far. I was a bit confused about the political situation, though.

Taki and Klaus' relationship does not evolve from hatred to love as it typically does in other romantic stories in yaoi. At the beginning of the OVAs, we are introduced to their downfall, to the abusive relationship of a man who does not understand the values of the one he fell for, and a submissive character who , in spite of being somewhat reluctant about it, chooses to drag it along in secret.

After reading the manga, I came to understand why Taki didn't put an end to it. Not only are the manga scenes more explicit, but the dialogues express a lot about it. Taki craves for Klaus, but for his love and affection, while Klaus is desperate because Taki's been mantaining a distance between the two because of their circumstances.

Their relationship is more than a taboo. Not only are they both male, they are form different countries and what's more: they're at war. Taki is the emperor's nephew and Klaus was a spy for the Western Alliance and is suspected to be betraying Taki's trust and honor as his knight (which means he has renounced everything to serve Taki unconditionally).

Those around them certaintly do not understand their relationship. After all, why on earth would a noble man entrust himself to a foreigner with an uncertain past? The reason is less clear than I'd like it to be. They met when they were very young, at a ceremony in which Klaus got lost and ended up helping young Taki reach flowers. At this moment there is a bit of cliché, the whole love at first sight thing I'm usually not fond of. However, when they meet again at Luckenwalde and Klaus is assigned to watch over Taki, they end up falling in love after a year. They have their first romantic encounter and it's when you realise how genuine their feelings were when their relationship began.

I love Taki's character, he's strong, is an innate commander and deeply cares for his people; therefore he's unwilling to give up on them to stay with the man he loves, and the "solution" they find in order to be together unsuspected is Klaus becoming his knight, to which he eagerly agrees (even though Taki is well aware of how he is "becoming impure" by mantaining such a relationship, he doesn't stop Klaus when they first make love to one another). Klaus is not what I'd expect from the stereotyped seme. He's not handsome at all, nor appealing. He's very rude towards others and has no respect for any of his superiors other than Taki. He is, however, loyal to him and despite their sexual relationship deeply cares for him (which is why he becomes so enraged with himself after he realises the physical, phsychological and spiritual damage he's done to Taki by forcing himself on him).

The anime itself is not very clear on these aspects and I had to watch it twice and read the manga before I realised some of these aspects of their relationship. I like the idea of war-torn lovers, the whole taboo.Their relationship is more dramatic and sad than most I've heard of. So I give it a 9 out of 10 in the anime, although it's my second favourite manga. Same for the characters, there is not much character development, Taki is much more compliant and femenine than in the manga, in which he defies Klaus more (which enrages him and makes him do what he does - this appears to be way too impulsive in the anime, which I didn't like at all). So, I give it an 8/10. The side characters didn't leave an impression on me in the anime either, I repeat myself by saying this is far better in the manga.

I really liked the detailed animation at first, although it doesn't do Inariya Fusanosuke's art justice, the beautiful colours they added and the great voice acting made me love it. The music is forgettable, but suits the atmosphere and plot.

Overall I think it's a good anime, the original work helps save the mistakes the adaptation makers made. It's definitely not a yaoi meant for starters or those faint of heart, but I love it regardless. I give it an overall 8/10, and do recommend for those who wish for a different kind of story n.n

(I wrote this on impulse after reading the reviews here and in other sites, I was pissed so I didn't pay much attention to the writing, pardon my atrocious prose, grammar and spelling D:) 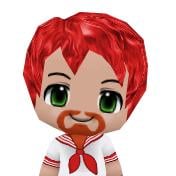 My take on this Ova anime; I assume that you have to read the manga to get the full spectrum of their relationship. It begins very quickly into a very shoen-ai relationship which seems to be onesided and abusive. There wasn't enough to really go on storywise, you just have to watch it and let it unfold. By the second OVA you begin to understand that Taki wants the relationship and Klaus is rough and violent in his use of Taki. To the point that you have to wonder if it is love or just flat out rape. But considering that at one point they were in Klaus's quarters, it is assumed that is concentual by Taki.

It's very difficult to understand this one. I guess you have to watch it with an open mind. Yaoi seems to be 2 guys in love, Bara seems to be sex with no love and shoen-ai seems to be man/boy relations, usually with the boy in love being plundered. This is strange as the boy is a higher commander.

I feel that there is more that needed to be conveyed in this anime but I will look for the manga to figure more out.

Story/Yaoi Guys: The rain is pouring down on the angst below as the train prepares to depart into the sunset dark, deep abyss, the abyss of one man's soul. The angst was in the form of a man, a good looking, bishonen who is a noble of some sort. He gives off a vibe of nobility and deep profound nobleness and approaching the angst is a rapist guy with a rape on his face face who looks like it's about to rape dat ass is mine before this ends

You see how profound that is? That's the anime, but not as profound, deep and know what? It's a load of shit, both of them are. You got two countries, Klaus and Angst are from separate ones and being the gentleman Klaus is, he rapes Angst. The guy puts up a magnificent facade as a noble gentleman whose a fucking badass on a bike; a role model for a kid, who gives him a "Do good shit" speech or whatever, encourages him (Essentially) and taps dat ass. You just know it's going to happen with a face like that.

It's hard to give a damn about the plot when it's shit. The war is a backdrop for love making and the ending is just terrible. Slapshod and added pieces until it became good enough to send on through. But you know this is bad, just not how so. There are some random bits after the end of each episode about chibi Wolf/Cats, but it's kinda... pointless. Didn't care much about them and by that time, my mind was just wasting away.

Come not for the plot, but for the sodomy.

Animation: It's yaoi. The guys have to look good.

Sound: Just kill me now. I can't even fucking remember the sound.

Overall: It was shit. The only possible way this is worth a watch is if you're watching it for some club that watches shitty ass anime, you enjoy yaoi and if you enjoy sodomy.

The only thing worse than this anime is this review of mine...

There's a war going on (I think), the main character gets raped a couple times and the rapist guy is suspected of being a spy or something... Then they fall in love and live happily ever after... At least that's how I remembered it. I also recall the main characters virginity being a big deal for some reason, but that was completely stupid and irrelevant.

Gonna have to update this part a bit... I had originally said that the animation wasn't that bad, but I was wrong, because it's pretty fucking bad. It's complete ass just like everything else in this anime.

Can't say I remember any of the music at all... It was pretty forgettable.

These characters were bland and lifeless. They had hardly any personality at all and I find myself absolutely despising the two main characters who were quite possible the worst I've ever seen. I'm pretty sure Taki and Klaus don't even know what a fucking emotion is...

This was the first yaoi anime I've ever seen... And while my expectations weren't particularily high, this was still so much worse than I thought it'd be... I wasn't really expecting to find any of the guys attractive since they aren't really my type, but my God they were so boring. I could have at least liked them if they had some sort of personality but there was nothing there at all. The sex scenes were all awkward or disturbing and not the least bit sexy, and there was just so much stupidity going on throughout the entire thing that I just couldn't enjoy any of it. I've been told that the manga is a lot better though so maybe it was just because this was a short 2 episode OVA that it felt so poorly paced.