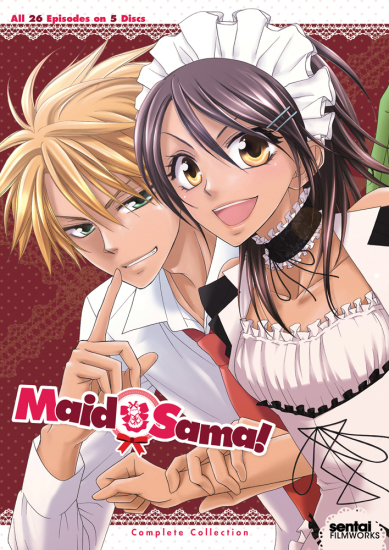 The Maid and the Vampire

Areum has fallen into a strange world called 'Soltera' after a car accident. She is mistaken for a vampire because of her hair color, and she is sold to a Duke’s house by a slave trader. The identity of Millard Travis the master of the Duke’s house that bought her is the one and only vampire in the world! Desperate to survive in any way, Areum becomes Millard's direct servant, vowing to serve him as her master. Areum tries to belly up on Millard day by day and his attitude starts to change.

Before Teru’s brother died, he gave her a special cellphone connected to "Daisy", a boy who would be there to look out for her whenever she needs someone. One year later and Teru continues to send mails to the mysterious Daisy, but she still has no idea who he actually is. One day, after accidentally breaking a window at school, Teru meets the rude school janitor, Tasuku Kurosaki, who insists she work off the cost of repairing the damage. But there’s more to this grouchy caretaker than meets the eye as in reality he is the Daisy who has been watching over Teru for all this time! With no intention of letting the lonely girl know his true identity, Tasuku must attempt to help Teru without being discovered, but can he really keep up the act, and just why is he taking care of her in the first place?

Hanako doesn't have much experience with boys, so when she finds out Bara High (and its adjoined dormitory too!) is becoming co-ed, she becomes excited. But the first boy she meets is the top student from the boy's school, Kakeru, who turns out to be not as nice as he seems, and declares that he will make Hanako share a room with him! How will Hanako deal with this mess?!

High school student Hojo Saito married his classmate, Sakuramori Akane, the girl who’s his worst enemy in school. “If you tell the rest of the class we’re married, I’ll kill you” “I don’t want them to know either. There’s no point in that.” Their newlywed life wasn’t going so well, and they were constantly at odds. However, as they progress through their daily lives, the distance between them closes, they have more enjoyable moments together, and they gradually come to understand one another. Saito learns about Akane’s cute side, which he never saw before, and Akane gradually began to recognize the feelings that she’s been keeping inside…

One day, Nao's father suddenly announces shocking news! Because his friend helped him with his debts, Nao's father agreed to have Nao and his friend's son engaged! Nao is furious with this agreement and transfers to her fiancé's school, Kaei Academy, in order to make her fiancé break off the engagement. But how can Nao force her fiancé to break it off when she doesn't know what he looks like?! Join Nao in her quest to find her "husband-to-be"!!

A girls' high school that Mamoru attends has amalgamated a boys' high school, which was her wish for a long time. She expects that she will be able to find a boyfriend soon. However, boy students are around ten percent of girl students, and Mamoru is annoyed because her classmate Azuma makes a pass at her. He is known to be dirty-minded. When she was fighting against him as usual, he kissed her all of a sudden.

The childhood friends Akkun and Nontan are boyfriend and girlfriend. But Akkun is always saying ridiculously harsh things to Nontan as well as being cold with her and is frequently moody. But that’s just how Akkun expresses his love for Nontan. This is a high school love comedy about Akkun and Nontan, who doesn’t seem to care at all about how Akkun acts toward her.