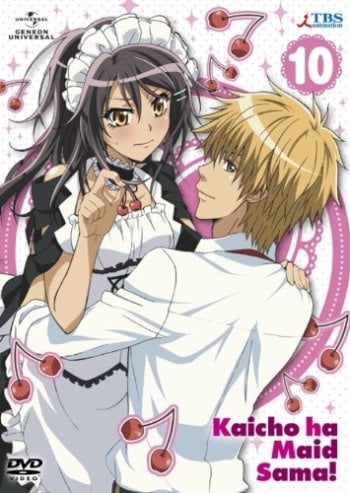 Because I’m a Maid!

Ruu is having a hard time. Her mother died when she was little, and her father, with whom she had been living, has disappeared without a trace after getting into debt. Ruu is on her own.To make ends meet, she takes a job as a live-in maid for a very wealthy household. To Ruu's surprise, the house she ends up working at is the home of three cute brothers, and she already knows one of them! They agree to let Ruu work there because they are often alone and they could use the help. Ruu moves in and works hard as a maid, and they all become very close. But things aren't always smooth sailing. Ruu has a lot of pressure on her because of her father's debts, and three very cute guys to deal with!

After her mom gets into an accident, Ayumi has to go in her stead to be a maid in the noble Takaido household. However, it's not an ordinary maid job, and Ayumi is assigned to serve a highly perverted and saucy young master.

In the castle of Earl Craven, all the maids, including the lovely Priscilla, are strictly forbidden from ever looking their master in the eye. This is because the man they serve is none other than the detestable Demon King! But he's not a demon at all, and isn't even slightly evil, a fact that Priscilla learns when she accidentally runs into her employer in town. Over time, the girl becomes infatuated with the charming young man, but is terrified to reveal her true identity. After all, who would ever accept the love between a maid and an Earl?

The heir of the huge Fushiki corporation, Tomoe, comes to Japan as an exchange student. He is his father’s youngest child and on top of that - his mistress’s child, but he was still appointed as heir. There’s danger that people will aim for his life. They attach to him a new maid, with glasses, naturally clumsy and ill-mannered... who turns out to be his new bodyguard, defending Tomoe with her mop!

A certain beautiful princess was captured by a demon king, and a hero went out with his party of adventurers to rescue her. When he returned successfully, he asked for marriage as his reward... but not with the princess, with her maidservant Aria Milford! Aria was as shocked as anyone else, since she quite happily considers herself a minor character in this story! The hero is determined to win her hand and her heart, but what will she do about it?