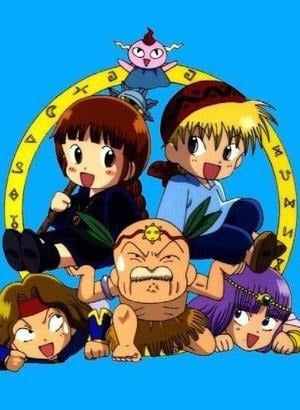 Hello, my name is sothis, and I'm a console RPGaholic - my addiction began with Dragon Warrior 1 at the age of eight, and it went downhill from there. Fellow addicts, rejoice! The 8-bit parody franchise Mahoujin Guru Guru is here to provide you a fix.

Mahoujin Guru Guru, in general, follows two young heroes as they embark on a quest to thwart the ultimate evil; and much like an old 8-bit classic, the story isn't terribly important or complex. Instead, the franchise aims at poking fun at all elements of old RPGs, including black box information screens, hit point displays, midi-style beeps and special effects, and wacky monsters.

However, this review isn't for the Mahoujin Guru Guru franchise as a whole, it's just for the movie; and the movie, at only thirty-minutes in length, is more of a side story or extra episode than an actual standalone anime. In some cases, that kind of anime works - for example, many people enjoyed Cowboy Bebop - Knockin' on Heaven's Door as a standalone, action-packed piece of art. Unfortunately Mahoujin Guru Guru Movie does not fare nearly as well, as the story is too isolated, the quirky and niche characters have no introduction, and the ongoing inside jokes of the franchise will be somewhat lost on new viewers.

Even dedicated fans of the franchise will probably not find much value in this film. Regular episodes of Mahoujin Guru Guru alternate between being genuinely funny and feeling like the jokes are trying too hard; Mahoujin Guru Guru Movie, while having a wacky idea for a plot (come on, it's called the "Pickle of Happiness!"), falls into the latter category. This lack of laugh-out-loud humor combined with the void of character development and introduction makes for a relatively uninteresting watch for both new and existing viewers, but if you like watching anything that has to do with RPGs you might still find some value in the plot.

Like the TV series, Mahoujin Guru Guru Movie takes place in a RPG-like world filled with wacky monsters, bizarre plants, and chibi-style characters. The cute and colorful monsters are definitely my favorite of the bunch, as well as the random monster plants and silly items. The RPG parody elements such as the information boxes and hit point meters are also a big hit, and instill a sense of nostalgia in addicts like me.

With plenty of midi beeps and special effects, old school RPG lovers will find themselves right at home with Mahoujin Guru Guru Movie. The music is equally as nostalgic and is mostly comprised of synths. Voice actors are fine all around.

Mahoujin Guru Guru's stereotyped characters fit perfectly with the parody tone of the franchise.  There's the young and brash Nike who doesn't have much of a desire to be a hero; the bumbling yet lighthearted Kukuri who can't seem to cast her spells right; Gipple the loincloth-wearing wind spirit who can expand his small cape into a tent; and an old dancing man who wears a disturbing grass skirt. Each is quirky in his or her own way and provides an appropriate level of comic relief.

However, Mahoujin Guru Guru Movie is short enough that you have no introduction to any of these characters; thus, new viewers will not understand the quirks of some of the more outlandish ones such as Gipple, and will subsequently not appreciate the humor or parody of the anime as much as they might have with background knowledge.

If you are already familiar with Mahoujin Guru Guru, expect no additional character development; if you are new to the franchise, expect to not feel drawn to the characters in any sort of non-superficial way.

Some will enjoy Mahoujin Guru Guru Movie for the sake of completion; RPG lovers will enjoy it for the superficial parody elements; and hardcore anime fans will enjoy it simply because they must watch every anime that exists. Anyone else should probably pass this one by, as the humor isn't funny enough, the story isn't interesting enough, and the length isn't long enough to warrant a second (or arguably first) viewing.