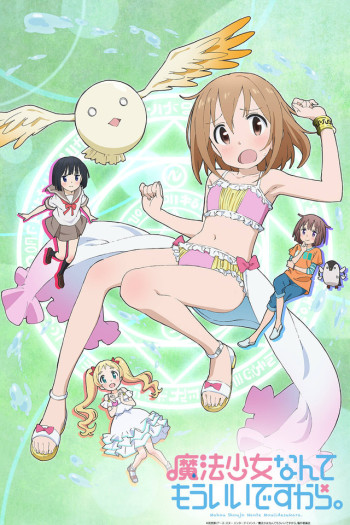 Illya loves magical girls; but more than anything, she loves her brother and wishes he would pay more attention to her. So when a talking magical wand appears, offering her a chance to make her dreams a reality, it seems too good to be true and she hesitates. But unfortunately, her touch was the only consent needed, and now Illya is stuck as a magical girl! On the bright side, she has all the powers that go with the job – like magic beams, shields, and incredible cuteness! But her path to love is a dangerous one, as she must now capture powerful and magical items known as Class Cards, while keeping them out of the hands of rival magical girls, before her wish will be granted.

So one way recommendation from Mahou Shoujo to Fate/Kaleid, to start I'm only looking at the comedy elements in this. Mahou Shoujo has short comedy just like in Fate/Kaleid but Fate did take it seriously a little bit on. Both are about girls who are found randomly to become magical girls and how they react to becoming magical girls, neither to be taken very seriously at first. So if you liked the comedy elements in Mahou Shoujo you may enjoy Fate/Kaleid but Fate is much more developed.

The Krakozhia Dukedom and the Grania Republic are at war, and high school student Souhei Yano wants no part of it. But when two Lieutenants show up in tanks at his door, his life becomes an exercise in dodging stray bullets!

While Military is much more crude, these shows have one unfortunate thing in common: loli. They are also both short-episode anime that have an almost exclusively female cast. If you liked one, you might be interested in the other. And you might want to delete your browser history.

If you like the sweet slice of life side of Mahou Shoujo Nante Mouiidesukara, I think you'll also enjoy Encouragement of Climb. Both are short form anime about four girls (of varying ages) who hng out due to similar interests. The episodes are pretty chill and are about enjoying young girls having fun with their friends.

Minami is an air-headed girl who is starting high school and who loves eating bread for breakfast. Baked goods bring happiness everyday to her and her classmates —the reliable Yuu, the pastry-baking Fuyumi, and the independent Noa.

If you like the sweet slice of life side of Mahou Shoujo Nante Mouiidesukara, I think you'll also enjoy Pan de Peace. Both are short form anime about young girls who hang out due to similar interests. The episodes are pretty chill and are about watching young moe girls having fun with their friends.

In a magical world, the naive and spunky Padadu is training to be a magical girl -- a title reserved for those who have defeated many in battles, and earns them a right to visit Earth. Along with her arch rival Pipin, seductive and manipulative Myumyu and the fugitive Nonononn, Padadu and her magical sentient fish costume travel the world in search of fun and adventure! But the tyrant queen Purilun and her lackey Zucchini are hot on their trail; will Padadu ever become a real magical girl?

After the conflict with Eriol at the Tokyo Tower, Sakura attained the final Clow Cards: The Dark and The Light. Since then, everything’s gone back to normal––but only briefly. While Eriol has decided to move back to England, Syaoran suddenly confesses his true feeling for Sakura and tells her he is moving back to Hong Kong. What will Sakura do? Although she’s unsure of her own feelings, her best friend Tomoyo tells Sakura that the true answer already lies within her. That is when Sakura decides to make something for her dear friend.