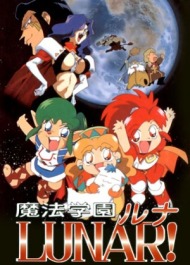 The evil Barua and Memphis of the Vile Tribe have captured the students of Magic School, and a group of unlikely heroes are the only ones who can save the day! Food-craving Lena, strong Senia and allergic Ellie are three young girls who would rather slack off, but now they have been charged with rescuing the students and discovering the secret of the Blue Dragon's power -- a power the Vile Tribe wants in exchange for the human lives! But the road to the Dark Castle is riddled with stray cats, confusing signs and a minotaur; can the girls last long enough to see the credits roll?

880 users are tracking this. Log in to see stats.

StoryClocking in at around eight minutes, Magic School Lunar definitely isn’t the easiest thing to write a full review about. The "story", if that’s what you want to call it, involves two villains who have kidnapped the students of Magic School. They want the power of the Blue Dragon in exchange for their lives, but there’s a catch: the dean of the school has absolutely no idea what the Blue Dragon is! Like any good headmaster, he then rounds up three stragglers and sends them off to save the day, much to their dismay. Though they do head towards the castle and ultimately battle the bad guys, the "movie" is much more focused on the random comedy aspect than it is on the plot. An old man pops out of nowhere to make wacky comments, realistic jabs at the character designs and animation abound and ridiculously disproportional bodies (no... not what you are thinking!) are the butt of all the jokes; clearly, this is something to watch only for the comedic value. Though, I should note that I didn’t find Magic School Lunar to be incredibly funny. The body size comments were probably the funniest thing out of all the antics and dialogue, but the slapstick humor tended to seem generic and the pacing was definitely too quick due to the length. For something so short, however, I guess the mix of comedy and story was decent enough. Just would have been nice if it was actually funny. AnimationDecent, but not spectacular. Following in the footsteps of such chibi comedies as Dragon Half, Magic School Lunar’s animation style is older looking, colorful, and full of chibis. Plenty of comedic talking bubbles and spazzing out characters can be found, with the bulk of the humor (in my opinion) centering on the very disproportional Memphis. He has a huge head and tiny body, something Barua takes the opportunity to point out at any opportune moment. Overall nothing worth writing home about, but it’s decent enough for a short comedic flick.SoundFairly generic and uneventful; I don’t remember most of it, but do recall that the bulk was synth-based and sounded very 90s. CharactersIt’s hard to set up or develop good characters if something is so short; Magic School Lunar is no exception. The three girls are given brief personalities (and provide the comic relief due to those traits, for the first few minutes of the film), but overall seem fairly flat. The best personalities are the most random ones: Memphis with his grossly disproportioned body, the old man, and the minotaur. OverallSometimes a movie or OVA can be several minutes in length, but it still has enormous value; Atama Yama or pretty much anything Studio 4Câ€“related are examples. Magic School Lunar, while trying very hard to be funny, falls a little short and ends up, instead, feeling rushed and average. If you really like the style of Dragon Half and enjoy watching ANYTHING with random humor, you might enjoy Magic School. Else, go for something else.