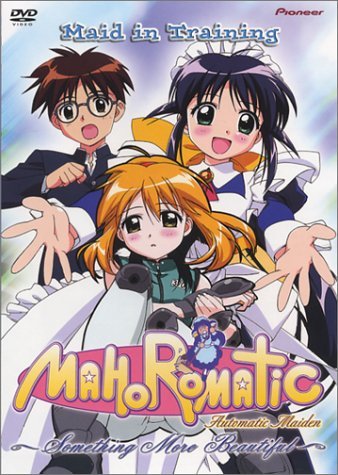 Ok people been a while since i've last reviewed an anime and i might be a little rusty.Anyway let's get cracking,shall we?

And we start with worrying news cause i liked it.I liked both seasons(not all of the material to be honest,but still..)Somehow the whole concept,the characters,their interactions.....The lot,i liked it.In fact i liked it so much that since sex robots are all the craze right now,i'm gonna order a bunch of them and make them look like the characters of this show.Especially Suguru...What can i say i love girls with glasse........What?He's a guy?No way....Ok let me check again...Are you sure?He's pretty much spineless.DAMN..

Anyway let me share with ya my experience with it so far and i'm gonna cover both seasons..Just to prove to the ladies that some men CAN multitask......That's a big fat lie actually we can't.Don't blame us blame the manufacturer.

Ok so Mahoromatic is pretty much what you'd expect from an era when maids where some sort of big thing in our little world of anime.but unlike all other maid animes this is a special kind of blend of parody,slice of life,drama..Let's just say that it wants to be many things at once..But somehow it isn't a terrible mess unlike so many other animes i've seen so far.It manages to be  funny,touching,exciting,and admittedly a bit perverted all at the same time.The setting is a near-future earth caught in a war between Vespers and Saints...This seems a lot like Neon Genesis Evangelion right?That's because this is a parody of the Gainax hit,N.G.E.The big heads of Vesper as well as a few other characters in terms of design are like they came from the same womb that gave birth to the rather serious cast of NGE.Leave the parody aside when it is its' own anime it really is its' own anime.It's an excellent show in its own right,with fun characters,tremendous animation and while the story is a sort one it's quite captivating.

The animation(we're talking about an anime in the early noughties remember)is of very high quality,with smooth action and cool mecha designs that easily compete on equal ground to other great shows by Gainax in design.Mahoro's mech partner,a panther-like cyborg named Slash(not the one from Guns and Roses),is probably my favorite.That aside everything in this show won't dissapoint mecha fans.It even has a robot that cuts down girls swimsuits..Now how cool is that?

The other favorite of fans and mine is Mahoro,who is like the bastard child of Arnold Schwarzenegger's Terminator and Ann Nicole Smith and it's amusing to the core...And quite bipolar in its' nature.This duality goes across the range of characters.One minute they're being funny and then turm serious.Especially towards the end of the series.Then there is Suguru,who is probably on of the most stereotypical male leads out there.I honestly think that he was there most of the times to serve as Mahoro's sense of purpose and as a boy toy for his perverted teacher,but even like that he comes across as likeable.Suguru's friends at school though are not so exciting.I liked the girl that has an orgasm every time she tries Mahoro's cooking...She actually reminded me of the reactions people have in Shokugeki no Soma..In comparison his two male friends, are somewhat dull and forgettable.As for the new kid Minawa..Let's just say that a log is more fun and entertaining than her.She must be the most useless character in history.I don't think she can be classified as a side character.Ok she has her moments but they're not enough.As for Ryuga he's now a teacher as well..Not much action going for him..

From the beginning this series has the Mahoro has not much time left theme and this has a deep effect in the story.It's one you might not see at once.It's slow but effective.This shows at the end of the show.I won't spoil it for you but let's say i kinda expected it.The signs were there in Mahoro's behaviour.There were symptoms but you tend to forget about them while watching the gags between the characters.it wasn't bad as such,it's a typical Gainax ending.Did it fuck it up for me?Not so much that i hated it to the extremes.

As a whole it was a nice,entertaining show.Mind you it does have many nude scenes..But i'm a lad so i don't give a fuck and be offended by body anatomy like some fruitcakes.It is a genuinely well-written story with a point to it besides mindless violence and panty-shots.

I'm kind of commentless on this whole series. Hmm lets see..it's great and bad at the same time. Have you ever feel that some anime plots need to 'do something' to make you feel great and satisfying after finishing them? Well this series did do 'that something' but in a ridiculous way. It has a great plot in mind but the plot wasn't performed and carried out well.

The whole great 'plot in mind' was carried out unsuccessfully due to many reasons. Even through season 1, every great moment and great music was very brief and cut off abruptly. The whole two series did not go deep enough to describe how each forces such as Vesper, Saint and management come about. I have no idea as to what the 'Saints' are capable of, which leads to the great confusion throughout the final episode between the conversation of the two saints. We are actually not clear as to how Mahoro was created either since the saint has also created an image of mahoro in the last episode. Is Mahoro real, or just a memory projection that exists within suguru in the final episode? If Mahoro's real, was her body cloned? how did she manage to 'stay in shape' after what I believe was self destruction in the previous episode?

Throughout  both seasons, you can feel the sudden twist of the mood, from lighthearted, jokish to heavy and serious. This sudden change of mood can be confusing at times and i feel that the seasons focus more on the Ecchi aspect of the anime rather than trying to properly develop a plot.

I gave an overall score of 8 because of its funny, sad and happy moments that somehow manages to achieve their purpose and brings joy in watching Mahoromatic. The plot has such a great potential but it was put to a complete waste by poor directing and character/story developments. I believe most of us hope for the union between Suguru and Mahoro, but not in that completely confusing and ridiculous way as presented in the final episode of season 2. It's like building something I suppose, the builder has great materials but does not know how to properly use them.

Still I don't recommend anyone dropping this, you won't regret it when you finish this.