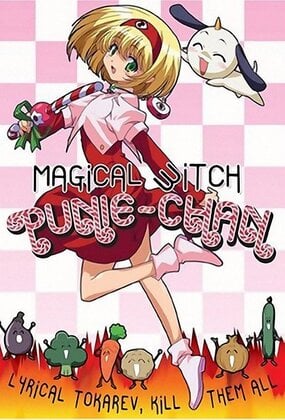 Punie is a princess of Magical Land who is in line with the throne; but before she can inherit it and become the queen, she must travel to Earth to prove to her mother, Esmeralda, that she has what it takes. In this new strange land, Punie is a cute girl who is very easy to get along with; but when she is upset, she uses her magical staff to take care of business! And when magic isn’t an option, Punie uses wrestling moves known as “Submission” to take down her enemy like a true queen. Together with her mascot Paya-tan, Punie will make new friends and take down new foes with style!

StoryIt's difficult to talk about this anime at all without mentioning its far more successful sister program, Bokusatsu Tenshi Dokuro-chan. That anime is a rather witless escapade, repeating the clichés of the ecchi sudden girlfriend genre without satirising them - its sole funny conceit merely being that the abusive side of this cliché is carried to its natural extreme. As geysers of blood are basically the only joke it has, Dokuro-chan is a classic example of diminishing returns. It is therefore astonishing that the less popular version does everything right that Dokuro-chan got wrong, and in spades. This is a straight-up satire of the magical girl genre, and is so hilariously sadistic and gleefully sharp witted that even someone never exposed to that kind of anime may be in stitches. Subverting the tropes of its genre with aplomb, the humour then even subverts our own expectations of the subversion - or does an expected comic transition with a hysterical gag. If Dokuro-chan is, at its core, about a good natured girl who just goes a wee bit overboard with the smashing, then Dai Mahou Touge's core values are the burning eyes of Satan staring back at you through hellfire. Alright, that's overstating it just a tad, but this one is the unapologetically black comedy I had so desperately wanted the other to be. Though deliciously dark, it's far too self-evidently silly for anyone to really take offense at. Bottom line: Unlike far too many comedic anime, this is a finely oiled laugh machine, producing successful set-up after set-up. The premise really should get old. It doesn't.AnimationThis isn't a high budget production by any means, but the cheery and cute visuals are an ideally deceptive compliment to the superb humour. Highlights would include the garish, candy-coloured look of Magical Land, and the Mascot Village. The use of CGI when it appears is pretty obvious but not distracting. It was through witnessing one truly insane moment seen in the opening song that I knew I had to see the series - that incident promised so much cheerily savage humour.SoundThe opener is deliberately generic fluff (notable for its twisted lyrics) and the closer is peculiarly mock dramatic, as if someone based a magical girl series off Unforgiven or something. I'm copyrighting that idea right now, so if I see any anime production involving Clint Eastwood in a skirt I will sue. Speaking of Eastwood - well, let's just say there's a wide variety of excellent vocal performances, including one that may call to mind those manly loner types he was once known for.CharactersThe simplest thing I could say about the characters would be to laugh a lot. Rare indeed is it that an anime has such an excellent ensemble, and I wouldn't want to say too much so as to spoil many of their introductory jokes. They can be cruel, stupid, treacherous, psychotic, adorable, (or psychotically adorable) but they're almost always sidesplittingly funny. Many are wonderfully skewed takes on various magical girl tropes - and others are, well, really bizarre. While our heroic magical girl is comic in ways you might expect - and even some you may not - there's another character whose moments are so filled with mirth that this figure practically steals the show. I was admittedly uncertain about the potential of some characters introduced at the start of the show, but they were wisely underplayed so their comic value didn't run dry.OverallThis is an unassuming little thing, wrapped up in mediocre production values and cheesy music. It never really feels like the sort of weighty classic people will still be yapping about for years to come. None of that matters a whit - it makes me laugh, then laugh some more, and with much greater frequency than shinier, more polished anime comedies. So it's without any kind of exaggeration that I say this is by far one of the funniest anime I have ever seen. Also, this is unquestionably one of the biggest surprises I've ever had, having gone in with low expectations and been richly rewarded with this brilliant gem. Fans of black comedy, satire - and yes, Dokuro-chan - are much advised to check this out.

Dai Mahou Touge, from the somewhat obscure Studio Barcelona is an interesting beast. With a top recommendation of Bokusatsu Tenshi Dokuro-chan and both the violence and the magical girl tags makes for an interesting and potentially great combination. While my personal preference generally excludes series with the magical girl tag, this show was still noticed and put on my want to watch. *NOTE* Unless otherwise mentioned, JP front- and surname ordering is used Story (5.0/10) Unsurprisingly the show has little to no story to go on. Tanaka Punie is sent down to earth from the magical world to attend school as a test to become the new Queen. Waved off by her parents and leaving a path of destruction in her wake on the way to school, the stage is set. Once transferred to the new school, an attempt is made to immediately put her in place by the class delinquent Anega and her merry band of eccentric thugs. This is the first obstacle in many to come in her preparation to take over the throne of the magical kingdom. This might seem like an interesting theme, the story progression is missing and enemies and allies are thrown at her indiscriminately and randomly. Seeing that the series is one in which random humor and eccentricity prevails, it comes as no surprise that her magic include anything from homicidal vegetables to rabid meerkats in an attempt to extract some laughs. Incidentally I am a sucker for such shows, so it is straight up my alley. However, the laughs were few and far inbetween as most of the gags were very predictable and the show is often guilty of reusing the same type of comedy. One main theme in this show seems to be professional wrestling as Tanaka Punie’s magic is often disabled and she is forced to resort of wrestling moves to bring down her opponents. While funny the first few times, this narrative technique does overstay its welcome and soon you will be hoping for more diversity. Art and Animation (6.0/10) The art and animation are average. Backgrounds are relatively bland and animations are stale and jerky. However, it is perfectly functional and the general character design is quite decent. In particular the eccentric bunch of delinquents are quite unique in their portrayal and the main character’s mother (Tanaka Esmeralda) had a nice visual tinge to it. Sound (5.0/10) Generally functional sound effects, but nothing that surprises or impresses. There is an OST with adequate music and themes. The opening and ending themes are far below average for my personal tastes and while the opening has some interesting lyrics, neither are memorable in any way. The biggest blunder in the audio department, however, is the voice acting work. The main character is one of many faces and the way this is expressed is by using different voices. While this is not necessarily a bad point, the voice acting work does not fit the character at all. Furthermore, the voice actors for the younger sister twins (Tanaka Potaru and Pyun) is quite dreadful. Characters (7.5/10) In a random comedy like this one, the character have to be the ones to shine and form the series. This means that this category is more heavily weighted in my overall rating of this piece. Luckily, the characters are diverse and while there are some annoying or uninteresting main characters such as Paya-tan (the mascot) and Koku Testusko (the female school friend), most of the main and secondary roles are funny. My personal favorites in this show and the one which upped the series’ ranking are sentient vegetables, Tanaka Esmeralda and Anego and her gang of delinquents. These characters made for some memorable scenes and are definitely the strong end of the anime. Overall (6.9/10) The characters define the show here to the extent that the relatively weak production values and the lack of proper narrative are on the sidelines. As a show which revolves around random humor, this series sometimes hit the right nerve but unfortunately often fell flat on its face. Secret Santa 2015 Review

The Meat of the Review If you’re looking for an innocent little magical girl anime, Dai Mahou Touge is not for you. However, if you want dark humor, parody, and violence, look no further! Tanaka Punie-chan is a princess from Magic Kingdom, blonde, cute, and… so violent and scary, she scared off a big god-beast-thing. The fun starts with the opening theme, where we see clips of Punie-chan in front of burning buildings – including the landmark largest wooden house. Oh dear! The actual content is great, too, each episode unveiling  new parody of magical girl anime with as much bone-cracking as you can handle. It has killer moves, evil little sisters, and even suicidal vegetables. No, Potato-dono, don’t do it! Your have so much to live for! And then the credits roll, and you hear the absolutely perfect battle cry music, accompanied by fiery war scenes. You simply must see Dai Mahou Touge for yourself because, as the end song states, “There is honor in bending bones to their limit!”   Story – 9/10 The four OVAs (eight 12-min episodes) are episodic, but that’s just what they’re meant to be: perfect for parody. I do think the OVA would have benefitted from a bit more connecting plot. However, it’s a careful balance. Too deep of a plot would have taken away from the whole point of the production: an outrageous take on magical girl anime.   Animation – 6/10 I watched a very low quality version Dai Mahou Touge, so I’m trying to score it based on the points when the video was at its best. The animation did its job. Punie-chan’s facial expressions were priceless. Some of the “bad” girls were painful to look at, but they were supposed to be.  Character designs were, for the most part, typical. Again, that was probably part of the parody. I think the action was smooth, but the quality is always the worst during action scenes. While animation wasn’t amazing, it did its job and made me laugh.   Sound – 8/10 The music, especially the opening and ending themes, was the best, most fitting music I’ve ever heard in an anime! The voice actors, while good for the most part, did leave a little to be desired, particularly with Punie-chan’s friend, Tetsuko Koku.   Characters – 10/10 The main character, Punie-chan, played a perfect role as a magical princess with a violent personality twist. Other characters were either wonderfully stereotyped (like Tetsuko), or twisted (like the queen and Paya-tan).   Overall – 8.4/10 Wonderful, simply wonderful. There are a few moments of cruder humor, but not enough to make me dislike the anime. The majority was dark humor – my favorite. I recommend this anime to anyone who loves magical girl, hates the genre, or, like me, is looking for rather random, satisfyingly violent humor. 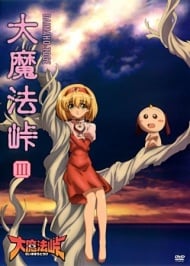 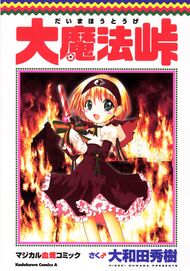