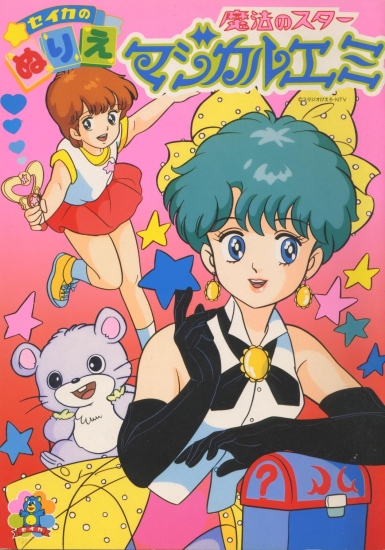 Yuu was having a typical day until she saw a large dream-like ship in the skies. After being pulled aboard, she inadvertently helped one of the aliens living within it; and to reward her, the alien gave her a gift: magical powers that Yuu can use in any way she sees fit for a full year! Using her new magical wand, Yuu is able to transform herself at will into the pop idol Creamy Mami – a girl who is highly sought after both by production agencies. However, she is also desired by Yuu’s childhood friend Toshio, even though he has no interest in the more homely Yuu. Can Yuu fulfill her dreams, win the heart of her love, stand strong against the rivalry of her peers and be the best idol she can be?

same art style. same romance story. and if thats not enough then in Magical Emi u even see a few hints of Creamy Mami for example in the first episode a box with her on there and in another the Creamt Mami van. So many things are the same so if u like this anime go  check the other one out! :p

In a future not too distant from ours, "Nanagoo City" is a beautiful city in Japan surrounded by mountains and ocean-sides. The sensitive, adolescent girls who live there are each opening up doors to their own, unique possibilities. No one wants to forget the path they take to adulthood.

Life is never easy for a magical girl, especially when your parents won’t let you practice your spells or even fly on your broomstick! When Sasami and her friends are invited back to the Magic World for summer camp, the chief sorceress uses an enchantment to bring the girls across without the knowledge of their teacher Washu; and during their trip, seeds of doubt threaten to break up the girls' friendship for good. Now, the Magical Girls Club must pull together to finally master their powers and conquer the mysterious challenges ahead of them!

Legends tell of a woman named Mayuri who, in the distant past, threw herself into the river after learning of the death of the man she loved, Zenjuro. A strange, crying frog creature was found near her body, and thus the locals came to honor a Frog Stone they created in the lovers' memory. Doremi, Dot, Hazuki, Aiko, Onpu and Momoko are visiting Doremi's grandparents, who live near Fukuyama Mountain where these events took place. Though the adults insist the children stay away from the mountain during the impending evening of the smiling moon, they go anyways to visit the Frog Stone for themselves; and along the way, the rumors of Fukuyama Mountain start to come true...