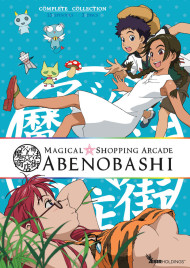 PREFACE Seen from afar, Abenobashi should only be viewed by people who have seen several genres of anime, are familiar with most Hollywood blockbusters and are accustomed to the Japanese culture. It is brimming with so many parodies of anime stereotypes, famous movie clips and cultural references that if you are not a seasoned otaku, you will miss most of the jokes. If you are not one yet, you better leave this aside until you become one. So… MOVE YOUR BUTT AND WATCH AS MANY AS YOU CAN if you ever want to truly appreciate the series. THE STAFF GAINAX strikes again with yet another weird show with an even weirder ending while Madhouse offers us one more of its wonderful animated works. This is also important in a way for being director Yamaga Hiroyuki’s best work (not that he directed many good shows to begin with). PRODUCTION VALUES [Wacky to the point of originality.] - Each episode features the exact same area (a shopping district) dressed as a different anime genre each time. It didn’t strike me as repetitive but as creative. So, yeah, I liked the concept.- The graphics are heavy on deformity, as characters are drawn simplistic and very often with erratic proportions. Being a parody, this is to be expected; a grotesque perception of the fine arts is a common trait in comedy. If you prefer clear drawings and stable proportions, then this series is not your cup of tea. Still, the deformity and the same background being changed on each episode was a nice idea and with a well presentation.- The animation is chaotic, as everything moves with cranny fps and little concern about the laws of physics. This mockery is done intentionally for increasing the laughing factor. If you prefer realism, look elsewhere.- Lightning/ Visual Effects are scarce but present. When something serious is going on, 3D models and nicely made lightings pop-up. - Voice acting and music themes are never serious-sounding but they are very high-spirited. If this were a serious series, then that would be something to bitch at. But since it’s not… they fit like bread and butter! A notice must also be given to all those easily recognizable variations of several blockbusters’ soundtrack themes. SCRIPT [Transformerabenobashi! More than meets the eye!] - There is scenario present only in the first, the seventh and the last episode. Unlike the cheery atmosphere of the general plot, it’s gloomy and serious. The story starts serious; not funny at all, continues as a parody and ends as a metaphysical mystery. Bizarre is not a strong enough word for it. But it definitely is different and interesting in the same time.- The serious part involves two kids who see the shopping district they grew up in to be about to shut down. Their families will move away and they will separate, a thing that makes them really sad and pessimistic about the future. Then suddenly…… The parody part begins with the kids being transported to alternative realities! On each episode (generally stand-alone), their district is transformed into a different-themed place. From epic phantasy (RPG parody), to science fiction (mecha parody), to martial arts, film noir, date simulations, and more (always parodies). And as I mentioned before, you have to be accustomed to many things in order to get the jokes. Most of the time, the kids try to find a way to return home but then…… The metaphysical part comes to bring revelations, plot twists and a really weird conclusion (can’t say more without spoiling the surprise).- The story has no side stories and is not even a main attraction. But it definitely gives reasoning for all the wackiness you get to watch and a purpose for the characters (other than making us laugh, that is). And yes, even deeper meanings can come out of it (can’t reveal what; spoilers suck). Compared to most parodies, Abenobashi not only has a serious side to it, but it also makes sense and provides philosophical questioning (if you stretch it a lot, of course). Even if undermined in favor of parody, it deserves a good mark for that. CAST [A bunch of likable idiots.] - The two main characters (the boy and the girl that travel throughout the alternative dimensions) start off quite uninteresting; wimpy boys and edgy girls are the norm of most anime. But as the story closes towards the metaphysical part, they become a lot more than what they seem at first (no, I can’t say more; you know why). They do develop and find a form of catharsis in the end. - The rest of the characters are there just for laughs, although the boy’s father and grandfather are part of the serious part of the story and that wizard/scientist does provide reasoning for all the strangeness of the show. No character development but really strong presence and mostly vulgar humor is what makes them better than average stunts. - In general, all characters have funny quirks that provide them with a strong presence in the story. - Interesting backdrop stories and personalities are otherwise hard to find in them. LEGACY [Tribute galore!] Depending on your personal tastes and acquired knowledge over movies and anime, some episodes will appear funnier than others. There is a repeating motif on the parody-based episodes that will probably tire you after a while but as a whole it is very enjoyable. Being a famous series that ends a lot different than it began, it does make it even more special and memorable, even if you didn’t like the ending or the crude jokes. SUGGESTION LIST Excel Saga FLCL Genshiken Panty & Stocking

A silly anime, but would I recommend it? that depends on your sense of humor. this anime is ridiculous and funny and has nothing much else going for it. nothing here really stands out. yeah it was funny, but the humor really slows down on much of the episodes. its forgettable, all except EP 12. Episode 12 has to be the funniest american movie's parody I have ever seen. but other than that not worth watching or covering

This is one tripped out show. I think Gainax just loves to create some tripped out shows. The first part is like a slice of life show, the second part is really created like a video game like a RPG, the third is a Star Wars Parody… the list goes on and on of what this show seems to do. I watched it mostly to see what the hell they would come up with next. It wasn’t boring at all to me because the story line just went a bit crazy for these two children. A lot of this stuff is odd and like Puni Puni Poemi or Excel Saga. It’s just pure insanity and that’s what makes it funny I think. Now, just like in FLCL, this show seems to have an underlining story line behind it all… but most of the time, I think it’s lost in translation. Where FLCL had an underlining meaning about growing up, this one seems to be about dealing with change. At least… I think it is. The idea is hard to figure out and really makes me feel a bit stupid but as I was watching this in the early morning, I didn’t really care. Part of the fun was that I had no sleep and had a moment of what I call ‘ask me if I’m a stone’ moment. (The reason for this is a very long story. Long story short, it’s when things that don’t make sense become funny when you’re running on very little sleep.) The character designs are rather generic mostly. I can see a lot of similar things between Eutus of this show and Kaze from Final Fantasy Unlimited making feel that they went for stereotypes. A mysterious man with a cape and long hair, chiseled face. Not sure about Mune’s character. When they show the history, she was pretty sweet and seemed rather... well, covered up. Now she seems to be rather slutty and show off a lot of skin. Threw the show, I have not seen any reason why that happened although it explains just a little about who Mune and Eutus are in the real world. I’m at least happy they don’t give me the middle finger and tell me to read the manga like how FFU does. The artwork is pretty vintage, but you can see signs of today’s crisp looking art. Unfortunately from the start, I could see many things in the artwork that makes me think Gonzo or Gainax right off the bat. I didn’t find out till later that Gainax did have a hand in it but I don’t understand how Madhouse has a hand in it. Most of Madhouses stuff looks so much better then this stuff. In fact, I could say that this is a lot like Final Fantasy Unlimited and FLCL more. Lots of times, they had a runny eggs approach and I was grasping at straws trying to figure out what I was even seeing. Colors just blend into each other, characters become miss-shapened, and a lot of odd things pop up from the blobs. The opening is very disappointing; looking pretty much like it was just clips from the first episode. The ending is odd as well with old still images. Both of these made it really odd. The voices… I’m not so sure why the English voices seem to have a southern Texan accent. I guess it would be something to show that it’s Osaka like but I don’t know about this. But then how the heck is Arumi’s dad able to speak so strong French when he is daughter sounds Texan still? I also don’t get why every 5 seconds, Arumi has to say her cheesy line. It’s annoying. It’s not just the English with the saying and the French voice. They say it in the Japanese dub two (Although it is really freaken funny hearing a French accent with Japanese language). This is one of the shows that they seem to of tried to keep it as original to the script as possible but sadly, it makes the characters sound odd. 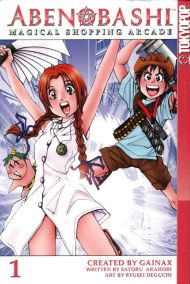