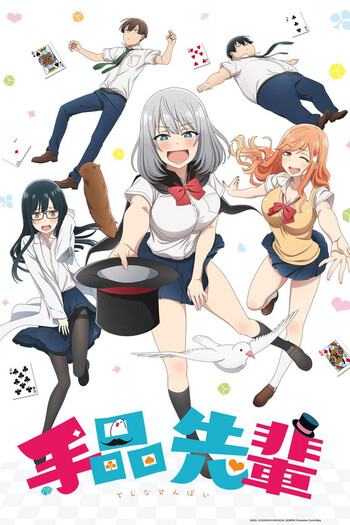 Why the Hell are You Here, Teacher!?

Ichiro Sato is about as average as a student can get… except for his above-average ability to land himself in totally awkward, intensely risqué situations with his no-nonsense teacher, Kana Kojima! Ichiro has his hands full dealing with these steamy shenanigans and unexpected encounters in the most unlikely places. At least it can't get any worse, right?

Both series are short, echi comedies with a lovable cast of characters. They get into fairly unusual, if not impossible, circumstance leading to hilarious situtations. These both are perfect to get your echi fix in a short period of time.

The main girl in this is pretty much Roka, except more klutzy. Both go for the same style of gags, and are worth a watch.

Not only is Ueno the president of the science club at her junior high school, she’s a genius inventor, too! However, despite everything she has going for her, there’s one big problem she can’t seem to solve: no matter what she does, she can’t figure out how to confess to her crush, Tanaka! Can she find a way to give her heart what it truly yearns for?

Both series consist of 12 minute episodes, with 12 episodes total. Both series have a male and female lead, where the female lead starts a bunch of the episodes weird premises due to her hobbies.

Both series also have ecchi elements, that are often associated with the comedy.

Theyr'e both super cute and fun! Thay have a simmaler vibe and if you loved Masamune Kun's revenge i can garuntee you'll 100% like Magical Sempai

Mischievous Nagatoro-san always bugs Senpai to get a reaction out of him. What is her motivation? Does she just want to create misery for Senpai? Or maybe she secretly likes him?