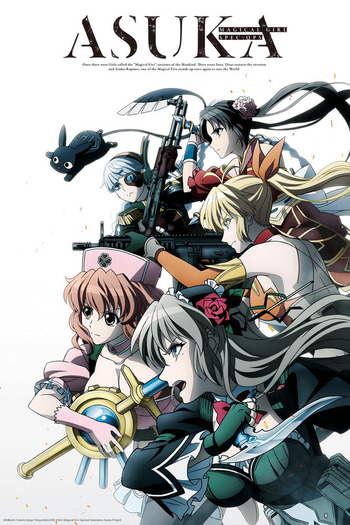 Watching Magical Girl Spec-Ops Asuka gives you the impression that whoever was responsible for its miserable existence had Puella Magi Madoka Magica on loop for days, took out the gory bits, made an AMV out of those gory bits, and wrote crappy fanfiction after deciding the gory bits just weren't gory enough. Like the giant-sized monster teddy bears and Velveteen rabbits rampaging all over town here, Magical Girl Spec-Ops Asuka is the bastardized and deformed pretend-spawn of all the magical girl shows we know to be cute and true. It's the extracted fetal matter of these magical girl shows that was incubated in dirty green-ish water for preservation's sake, then experimented on, repeatedly, until its creators finally decided enough was enough and gave it guns instead, so it could at least look a little different.

This show is one wild ride, with events coming at you so fast and with no gentle breaks in between, so the pacing is breakneck, horrible, and all over the place. There are, for example, two filler-type episodes that come on right after each other, with one of them featuring lewd torture scenes spliced between some lively scenes at the beach. Did I mention the dirty fanservice?

More than the gore and the blood, Magical Girl Spec-Ops Asuka thrives on all the things you don't always see in magical girl shows, and all the things you know are there that they just ain't showing you. What this means is, there are skinny girls with ginormous breasts in skimpy costumes that let them flaunt their bodies, big-eyed girls who flirt with each other, and characters who make all sorts of faces that give off all the wrong, intended sexual impressions. This is a show that lives on the edge and likes to cut itself open with it, operating under the false belief that proudly showcasing its wounds will make it instantly better than its more conventional counterparts.

Bloodshed, knives, and everything rotten does not a good magical girl show make, but Magical Girl Spec-Ops Asuka has long torn that memo apart, stomped its debris into filthy little pieces on the ground, and danced upon its remains, all the while singing about how so good and dark and revolutionary it is for defying the standards. But it seems to like what it's doing anyway, so maybe we're better off letting it be, huh? Not unless you want War Nurse's patented truth serum shot up your anus and having it whipped in her sex slave dungeon. Sailor Moon wishes it was half as cool as this.

[This review was made for the Anime Lottery Game: Winter 2019 event. Be careful not to look any of these magical girls in the eyes - they will suck you right in, homes, trust me on this.]

Oh dear god... this is the trashiest trash that I had the misfortune to witness in the last couple years. Made for edgy 12-year-olds who get a kick out of laughably exaggerated violence and cartoony one-dimensional villains who can't stop grinning like some deranged imbeciles with a single braincell left. Coupled with cheesy amateurish directing and excessively loud sound effects (do they think this makes it sound cooler or something) - it's a definite contender for the 'hammiest edgefest of the year' title. Some of the female characters exist just for the fanservice, which feels completely out of place when it's literally intertwined with a bunch of torture scenes in the same ep. The plot is thinner than the toilet paper it must've been written on. The OST is generic recycled garbage. This is absolute dogshit all around. The pits. The sweaty backside of the Muse of art.

Suggestions for similar dung in case you hate yourself or are an edgelord bitter at the whole world because mommy made you do your homework again: King's Game, Killing Bites, Triage X.

Major objectionable content (TV-MA). Not recommended for children or minors.

The show and characters were above average. It was nice to see a show where physical and (especially) mental trama actually matter. Not like some magical girl animes where intense physical trama simply causes the characters to get a small cut or bruse. Not like other magical girl animes where instense mental trama is softened for younger audiences. Also, one of the best anime OP, I've seen in awhile.

Although.. I believe that Tia Ballard was not the best choice to voice Abby. Her voice is more suited for loving or sweet roles, like Rinko from My Love Story!! or Shuna from That Time I Got Reincarnated as a Slime, not sadistic or villainous roles like Abby.

This series is gritty action packed and fanservicy (including some yuri) take on mahou shoujo. I like how the world is built so it’s more like sci-fi where magic is something brought from different world as a new technology. This series setting is post first conflict with magical creatures, which were defeated with help of magical girls equipped with technology obtained from allied faction coming from beyond the gate connecting magical world with earth. However, there is no happy ending after victory. There is no lasting world peace. It deals with war and personal trauma those girls chosen as mahou shoujo suffered. They had to play role of soldiers despite the fact it’s just bunch of young girls, who had to be part of outright war. Only five from group of eleven survived [1]. The adaptation of magic based technology is still in early stages so for any conflict with magical weapons army has to rely on magical girls. Necessity of magical girls makes unhappy many of soldiers across all ranks, because they would rather let the girls live normal life, than having them deal with war at the frontline. There is conflict as a mysterious faction tries to reignite war. The magic based technologies introduced into the world are gradually spreading not just to military, but to terrorist and criminal organizations as well. This mix of military and mahou shoujo fighting with knives and guns is pretty enjoyable. It’s reminiscent of Youjo Senki in that regard, but the technology and fighting style is bit different. Comparing this to Madoka series doesn’t make much sense as this is quite different take on mahou shoujo.

Main character Asuka dwells a lot on war events, loss of her friends and parents. She tries to live normal live and go to a school. She even makes friends. It’s the contrast of innocence and someone, who survived traumatic events or rather didn’t have proper life aside from being in military. She has to overcome those issues to be able fight on. In other words, find motivation to fight and live.
War Nurse despite her initial impression of cute naive girl is pretty twisted character and brings some serious edge with her interrogation sessions. Her character is somewhat justified by how badly she was bullied in school.
There are few other magical girls, but not much is shown of them in terms of character.
Even some of the enemies are portrayed in somewhat sympathetic manner except the first one, which is just twisted sadist obsessed with her mistress.
There is a great deal of brutal violence in the series. It isn’t uncommon to lose a limb during fights, people getting split in half, crushed, etc. There are some torture sessions too. The show doesn’t hold back much in that regard.
From violence to some sexual content it has usual fanservice and goes beyond that with some girl-on-girl scenes from somewhat mild tease to outright bed scene at the end.

Visuals and animation are ok. Soundtrack during action is pretty nice. Opening and ending I didn’t care about that.

The story is just mere first arc of greater overarching story line. For this reason, many characters felt left out, especially the last member of the five, and not properly introduced. It’s shame there is no second season. Hopefully one day more will be adapted. I did enjoy watching the series. I don’t know why didn’t finish it at the time it was ongoing. I’m going to pickup manga, because I’m interested how the story is going to continue.

[1] It seems heavily hinted that enemy’s leading magical girl is the leader, who supposedly died before Asuka took over.