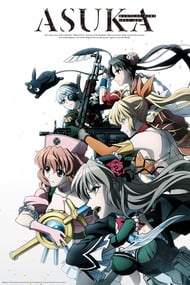 When the Earth is threatened by the sudden appearance of undead creatures, a group of young women blessed with powers from a mysterious source rose to defeat them. Now, after three years of apparent peace, the same malevolent creatures have resurfaced. Five magical girls are once again conscripted to war as the Magical Girl Special-Ops force, to defend mankind from an unholy nemesis.

The Magical Girl Comes Back

Daily Life and Comrades in Arms

A Very Realistic Way of Dealing with a Problem

Wish Upon a Star

The Lid of Hell

Each of Their Deadly Battles

The Magical Girls and This Beautiful World

If This Battle Ever Ends

Watching Magical Girl Spec-Ops Asuka gives you the impression that whoever was responsible for its miserable existence had Puella Magi Madoka Magica on loop for days, took out the gory bits, made an AMV out of those gory bits, and wrote crappy fanfiction after deciding the gory bits just weren't gory enough. Like the giant-sized monster teddy bears and Velveteen rabbits rampaging all over town here, Magical Girl Spec-Ops Asuka is the bastardized and deformed pretend-spawn of all the magical girl shows we know to be cute and true. It's the extracted fetal matter of these magical girl shows that was incubated in dirty green-ish water for preservation's sake, then experimented on, repeatedly, until its creators finally decided enough was enough and gave it guns instead, so it could at least look a little different.  This show is one wild ride, with events coming at you so fast and with no gentle breaks in between, so the pacing is breakneck, horrible, and all over the place. There are, for example, two filler-type episodes that come on right after each other, with one of them featuring lewd torture scenes spliced between some lively scenes at the beach. Did I mention the dirty fanservice?  More than the gore and the blood, Magical Girl Spec-Ops Asuka thrives on all the things you don't always see in magical girl shows, and all the things you know are there that they just ain't showing you. What this means is, there are skinny girls with ginormous breasts in skimpy costumes that let them flaunt their bodies, big-eyed girls who flirt with each other, and characters who make all sorts of faces that give off all the wrong, intended sexual impressions. This is a show that lives on the edge and likes to cut itself open with it, operating under the false belief that proudly showcasing its wounds will make it instantly better than its more conventional counterparts.  Bloodshed, knives, and everything rotten does not a good magical girl show make, but Magical Girl Spec-Ops Asuka has long torn that memo apart, stomped its debris into filthy little pieces on the ground, and danced upon its remains, all the while singing about how so good and dark and revolutionary it is for defying the standards. But it seems to like what it's doing anyway, so maybe we're better off letting it be, huh? Not unless you want War Nurse's patented truth serum shot up your anus and having it whipped in her sex slave dungeon. Sailor Moon wishes it was half as cool as this.  [This review was made for the Anime Lottery Game: Winter 2019 event. Be careful not to look any of these magical girls in the eyes - they will suck you right in, homes, trust me on this.]

Oh dear god... this is the trashiest trash that I had the misfortune to witness in the last couple years. Made for edgy 12-year-olds who get a kick out of laughably exaggerated violence and cartoony one-dimensional villains who can't stop grinning like some deranged imbeciles with a single braincell left. Coupled with cheesy amateurish directing and excessively loud sound effects (do they think this makes it sound cooler or something) - it's a definite contender for the 'hammiest edgefest of the year' title. Some of the female characters exist just for the fanservice, which feels completely out of place when it's literally intertwined with a bunch of torture scenes in the same ep. The plot is thinner than the toilet paper it must've been written on. The OST is generic recycled garbage. This is absolute dogshit all around. The pits. The sweaty backside of the Muse of art. Suggestions for similar dung in case you hate yourself or are an edgelord bitter at the whole world because mommy made you do your homework again: King's Game, Killing Bites, Triage X.

(Spoiler Free Review) Major objectionable content (TV-MA). Not recommended for children or minors. The show and characters were above average. It was nice to see a show where physical and (especially) mental trama actually matter. Not like some magical girl animes where intense physical trama simply causes the characters to get a small cut or bruse. Not like other magical girl animes where instense mental trama is softened for younger audiences. Also, one of the best anime OP, I've seen in awhile. Although.. I believe that Tia Ballard was not the best choice to voice Abby. Her voice is more suited for loving or sweet roles, like Rinko from My Love Story!! or Shuna from That Time I Got Reincarnated as a Slime, not sadistic or villainous roles like Abby. 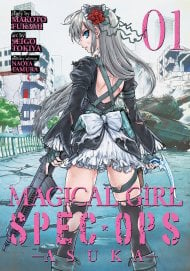