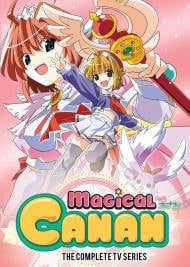 Life is pretty plain for middle school student Chihaya, who spends most days attending class and then going home to help out in her parents’ store, Angel Kiss. That is, until the day when her gym class is disrupted by a cute, but strange pink creature. Little does she know the sweet animal she has named Chuu is actually Natsuki, a boy who has been sent to Earth from the world of Evergreen! He is in pursuit of five magical seeds that have the power to enter human bodies and use their desires to turn them into monsters. His meeting with Chihaya was no coincidence, for within her is hidden the power of Magical Warrior Carmein. He must take a human form and persuade her to fight for his cause, and save Earth from certain destruction!

This series is actually a remake of a hentai. It has more story and no sex, turning the genre into ecchi. ART SECTION: 6/10 There wasn’t much detail given to character figures, especially the faces. But as far as body types go, they were minimalistic but nicely made. Minus one point for that. The transformation sequences and the special attacks were very well made but the repeating footage of them is a common trait (and problem) in all mainstream mahou shojo. Minus one point for that too.Frame rate was a bit low, repeating footage of minor animation (such as flapping fabrics) and stale images were present more than they should. Another two points out for that.Fan service was more than pleasing, as it was neither overdone (it didn’t make the girls feel like sluts), nor it was lame most of the time. Expect tons of pantsu, boobies and bathing scenes, without anything extreme in them (no sex or serious sexual harassments). Just be warned that most girls are really young, so a pedophilic aspect may pop its ugly head from time to time (Japanese males are really fond of loli).The aesthetic portion of the animation is the thing that stands above the rest. The series in general is defined and set apart from the lot because of them. Detailed uniforms, fairy castles, cute mascot animals and a bunch of weird magic gadgets create a marvelous optical pleasure. Hell, for me it was better than the ecchi scenes! SOUND SECTION: 6/10 I hardly care about the sound department, unless something sounds terribly good or bad. From what I remember, voice acting was ok, as long as you like some high-pitched voices and mascot animals squeaking the same word every 5 minutes. Music themes were bearable. So, the sound was mediocre for my tastes. STORY SECTION: 5/10 As typical as a story can get. A young girl in the human world finds a cute weird animal. So cute that she kisses it. It transforms into a boy and reveals to be from a magical kingdom that tries to find a warrior in the human world, in order to help both worlds defend themselves against a coming evil power. He turns her into a magical girl and sends her to stop invading monsters and demons. ENJOYMENT SECTION: 8/10 Although typical at its core, the story is good thanks to its continuous revelations. There is a romance between the girl and the mascot/boy that steadily blooms, there are secondary characters appearing all the time, there is more backdrop story revealed at each episode and the conclusion is not predictable from the start (although the last 10 minutes were). The plot is generally not straightforward and by adding ecchi scenes, light humor, and a small amount of episodes that prevents fillers, it turned out to be quite interesting most of the time. CHARACTER SECTION: 6/10 Nothing much to say about them. They were all generally quite stereotypical. The silly female protagonist, the bishonen boy/animal, the evil monsters, the mysterious rival and the final villain were feeling quite one-of-the-same in comparison with most mahou shojo out there. But at least they all mature as the story progresses, so I generally consider them to be mediocre as a whole. VALUE SECTION: 2/10 To be honest, I will never watch it again. Combining mahou shojo with ecchi does not work for me. Mahou shojo is supposed to be a good-willing genre for little girls and not a vulgar sexual fetish for teenage males. Plus, for me, softcore ecchi series are not that appealing as hardcore hentai, as the original series was. VERDICT: 5.5 / 10 Darn! Another failed hybrid. Oh well, back to the drawing board… SUGGESTION LIST Puni Puni Poemi, Bokusatsu Tenshi Dokuro-chan, Nurse Witch Komugi-chan Magikarte, Lingerie Senshi Papillon Rose. These are parodies of mahou shojo series. They also have a lot of ecchi and since they are brain-dead comedies, they appeal a lot more to the same kind of audience, without openly demoralizing the original genre. Lyrical Nanoha and Madoka Magica are more refined variables of the same premise.

As magical girl series go, this one was entertaining, with a relatively high kawaii factor and light ecchi undercurrents. It seemed to have an overall low-budget feel to it, though, with regards to the animation and soundtrack.