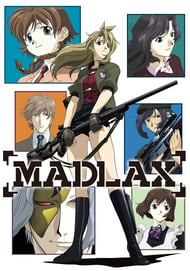 The country of Gazth-Sonika has been engaged in a civil war for more than a decade, struggling to stay afloat amidst attacks from the anti-government faction known as Garza. With lies and corruption seeping into the political food chain, a mysterious book in one young girl’s possession may be the only key to uncovering the truth and bringing an end to the war. This book, however, is sought by many. And when the invincible agent Madlax is hired to protect those in search of its truth, Gazth-Sonika dispatches a ruthless soldier to make sure that truth stays in the darkness...

Noir mark 2, also known as Madlax. Studio Bee Train messes a little weenie bit with the exact same premise and throws it out supposed as a different anime we should regard differently. I am not fooled by that so as punishment I will even reuse most of my Noir review. Because I am that evil, muahahaha! Just like THAT previous show as well as the later rehashes, Madlax made some sensation when it first came out. Being emo was cool back then and most didn’t mind watching the exact same thing over and over again. Just like the rest of these Chicks With Guns titles, it was shoved to the side more and more with each new similar anime before eventually being almost forgotten after Requiem for the Phantom came out (which is the best of this sort of shows). Its context was so simple, it got rehashed right away in later shows with gradually better directing. It’s like watching five seasons of Pokemon; the visuals may be improving but they are otherwise THE EXACT SAME THING!So yeah, the visuals are slightly improved in details and colors next to Noir. The baddies have more details on them and are not mass produced Men In Black clones. They have faces and show a lot more facial expressions while fighting. Plus the sceneries have a lot more flora in them instead of being just squared grey buildings. It’s like the difference between the environments in Metal Gear Solid and Snake Eater; they feel more natural and the battles look less artificial. Besides that, the animation is rather standard, with people mostly standing still and talking, while action sequences are basically the girls doing some really impossible acrobatics while their enemies are standing frozen for several seconds. Meaning, although the battles seem impressive on a superficial level, it all boils down to a few girls killing a dozen men with a six pistol, while miraculously evading a hundred bullets with fancy aerobics and hitting their opponents easily because they are standing still. Hey, I can only suspend my disbelief for a few episodes before it gets repetitive and the stupidity of the whole thing surfaces. THE MOOKS DON’T EVEN BLEED!The music is very good if you are fans of lyric music full of ambience. I personally have nothing against it and it holds out as a fine soundtrack to buy. The problem is that sometimes they are reusing the tunes, like they reuse the premise itself. And if you don’t understand what I mean…Madlax: http://www.youtube.com/watch?v=YqK21m0x9K0hack SIGN: http://www.youtube.com/watch?v=OfDUJ5WAtuEThe dialogues also have some maturity in them for going for some deep psychological or mysterious issues from time to time. Other than that, the overall simple context of the whole series will most likely make them feel like they are repeating pointlessly. Thus it is the music and not the talking that keeps you interested. Sound effects, meh, nothing special to comment. The story and characters are A MESS! Trying to stretch a simplistic premise to last a full season can only be accomplished by slow pace, repeating flashbacks, going in circles, and throwing in lots of battles with easily defeated baddies. It tries to be mature and mysterious but eventually the ending is one big WTF and you are left wondering the point of the whole show. Something about books which magically brainwash you? Only thing, the setting has NOTHING to do with magic. The main characters DO develop though. And by main, I mean only the girls since the male genre in this series is just an army of weaklings existing to be killed. It’s all about the girls and their emo pasts. There is some interesting chemistry amongst them (hem, yuri, hem) but the whole thing happens so slow and repeats a lot before eventually going for magical nonsense and people who talk for half an hour in the middle of battle instead of doing the unthinkable and just PRESSING THE TRIGGER. Yeah ok, lol and move along.There is no value in this anime, since as I said Requiem for the Phantom is its nth remake and the best of its kind (although I am no fan of emo chicks with guns and by no means fan of that series). As one described it, such Bee Train shows are basically long moody music videos and not good action/mystery series. So no, I don’t recommend it. Hear the soundtrack and skip the rest.

A marvelous blend government conspiracy, occult agenda, and action with a pinch of philosophy...more like a handful actually. Reminds me of the world we live in, they have their "Enfont" and we have our "Illuminati" When i first decided to watch this, it was disappointing because i saw it in the recommendations of Black Lagoon and in my mind was an image of a trigger-happy, Revy like chick with a taste for guns. The disappointment was more like a shock when i found the series to be more of a "thinker" than "mindless shooting". That disappointment further settled in because of the slow paced and boring episodes at the start. It took almost 10-12 episodes for the story to establish to a level that could be understood by most viewers. The suspense (confusion would be a better word here) in the first few episodes was irritating to no bounds and it took a whole lot of willpower to continue watching. Many times i thought of dropping the series but the only thing that kept me going was my personal interest in occult agendas and conspiracies. I will try to keep this review unbiased as possible.   Story: A very complicated mix of events and emotions but beautiful nonetheless. The story itself was very well thought of by the writers. They made a fairly simple plot into a enticing story without the help of many twists. What i disliked about it was that the "past" was shown way too many times to be comfortable. It felt like they were trying to stretch each episode to show as little as possible and the series to go on as long as possible. This is a real problem in the start of the series where the story just dragged on and on to the point of boredom. It does get more eventful and faster paced progressively through the series though but they continue to show the "past" as if we could possibly forget the 12,947 times or so they showed us before. The story is told more by the mental thoughts and emotions felt by the characters than actual fighting or similar physical events which i think worked fantastically to give the viewers the "feel" of the current plot. Though not impossible but trying to guess what would happen next or what would happen in the end is very hard and that gives everything happening in the show a feel of "freshness" or "newly out of the box". You just can't predict how it might end and even if you can then most probably you will have more than a few predictions to go with.   Animation: Colors were shaded and looked watered down most of the time which gave a great impression of how the world is supposed to be...dark and corrupted, lies everywhere. Animation was smooth most of the time and the effects were extremely well done especially the effects of war and action. Character design was nothing special and the way the characters were made to show emotions was bad.   Sound: The songs/tunes themselves were not too bad but the way they were synchronized with the anime was horrible. It just didn't suit the moment, especially in the first few episodes. The opening song sounded "cheap" and also didn't fit the dark theme of the anime. The ending song was just horrific...you just finished watching this girl kill tens of soldiers and then suddenly an almost romantic melody plays as the ending song. The voice acting (English dub) was average or a little above average.   Characters: There were some entries by characters who 1. Had no role to play in the actual main plot and 2.Didn't last more than 2-3 episodes. Those were a complete waste of time but i think they were necessary seeing that the producers decided to prolong each episode's story progression to the limit. Now the main characters had some good depth to them. The three main characters Madlax, Margret and the blond Enfont dude (sorry i forgot the name) had a lot of work done on them, actually the whole story was based on their history and background. The secondary characters were less fortunate and served just to support the main characters through different events.  Characters like Miss Vanessa and the maid Elanor did have very basic backgrounds on them. Now something i particularly hate about characters like Madlax is their ability to kill everyone in their way without getting even a scratch. She brought down whole armies like they were dolls just put there to be shot. This always makes the fighting seem unrealistic. They make the battle hardened soldiers seem like children playing with toy guns as not a single army man could put a hole in Madlax using FANAS and AKs while she could one-shot-kill them with pistols...hell, even the RPGs did nothing more than cause her to blink and the tanks were as useless as anything else.   Overall: A truly wonderful experience. All that "suffering' through the first few episodes was worth it when the end finally came. The climax of the story was also its jewel and it made everything come together in a satisfying circle. The ending came out to be what i wanted it to be and even more than that. A true piece of art. Really worth your time. Personally i would have rated it higher, but to compensate for my bias, i reduced the ratings to match an actual, nuetral view 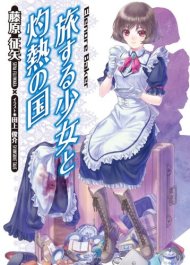