Made in Abyss - Recommendations 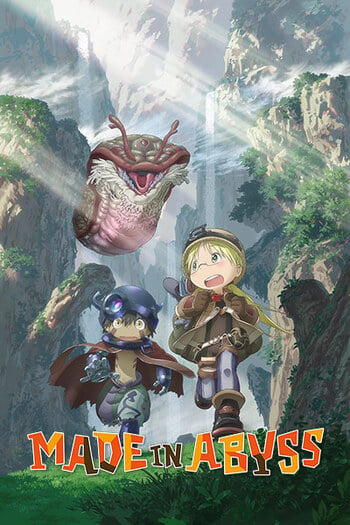 Both series have as action adventure tone, but darker. While they both start off rather innocent with an all children cast, things quickly get dark and dangerous. The fantasy aspects are beautiful for both, and although there is a big difference in plot, they both share a independent adventurous theme.

A side story that takes place within the Ergo Proxy universe about an autoreiv that travels on the Centzon.

The world is stunned when one of the seven greatest robots on earth, the universally beloved Mont Blanc, is found murdered with his head desecrated with makeshift horns. To confound the situation, the renowned robot rights activist Bernard Lanke is also killed and mutilated in a similar manner. Eager to solve these puzzles, Europol German Division employs the help of detective Gesicht, an advanced robot who has cracked some of the most difficult cases known to man. But no sooner has Gesicht received his orders when the robot North No. 2 meets his end along with the creator of the international robot laws, Junichiro Tasaki. While society struggles to come to terms with these incredible events, one thing becomes clear to Gesicht: someone is targeting all of the world’s most powerful robots and it is only a matter of time before they get to him…

It's a bird, it's a plane - no! It's a young, not-quite-human girl who wants to go to space, even if it means leaving behind her family.

In a future not too far away, androids that look exactly like humans begin to spread across the world. The android production company SA Corp. produced Giftia, a new kind of android that has the most amount of emotion and human-like qualities out of any other model ever seen. However, due to problems in technology, the androids have a service life, and once they pass that, it gets pretty bad. For this reason, SA Corp. creates a terminal service in order to retrieve Giftia that have gone past their service life. A new employee at the terminal service named Tsukasa Mizugaki forms a team with the Giftia Isla to retrieve the other androids.

Asebi to Sora Sekai no Boukensha

In this world, men live on islands floating in the clouds. But the heavens are also the domain of "dragon fish", gigantic monsters hostile to humans and their ships ... Yuu is one of the guards responsible for protecting citizens from their attacks. In the company of Asebi, a young android, he decided to go on an adventure.His goal? Discover the ancient island of Brant, capital of the legendary archipelago of Waldecia, who hold many vestiges of human civilization at the time of its heyday!