Made in Abyss Movie: Dawn of the Deep Soul - Reviews

Alt title: Made in Abyss Movie: Fukaki Tamashii no Reimei 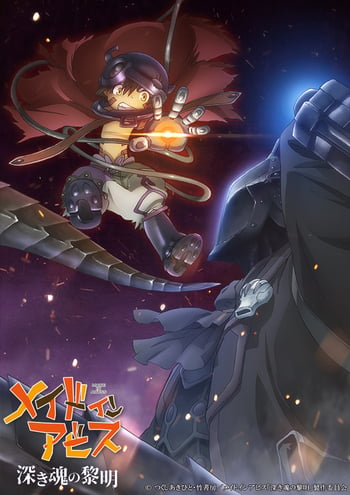 The deeper the story goes into the abyss more I think whoever is writing this has to be insane or psychologically disturbed and should seek help. I've already read the manga up and beyond the point of events in the movie. It's sequel to the Made in Abyss series adapting floor 5 arc. If you have seen Made in Abyss series and like it in the past, you are going to enjoy the movie. If you didn’t like it before, you are going to hate it even more after watching the movie. The movie is a sequel and presumes you watched the anime series. So, if you didn’t, I wouldn’t recommend to watch this before you watch the anime series.

Generally speaking, Made in Abyss series seems on the surface adventure/mystery series with some action mixed as heroes try to repel various predatory species in abyss. I would say that a half of it is more like alien and cannibal holocaust movie rather than mere adventure. Gruesome scenes happen, while blabbering some nonsense about adventure, progress, love and suffering to hide behind blanket of intellectual value. It’s Re:Zero again expect it’s slightly better, because there are no usual waifus, Subaru and most importantly pointless time resets. As the story progresses oddity and bizarre things in abyss increase. I’ve become somewhat allergic on stories strongly driven by shock factor. The first half of the Made in Abyss anime series was so good, damn!

The animation and visuals are nice, so that aspect you are going to enjoy. Soundtrack is good. The story does drag only very little. At few moments I thought it felt slow and I wanted to skip a bit.

Characters are same as before, there is little development, but it’s just like one mini-arc so it doesn’t matter that much. Story I would prefer something more respectable and saner.

As one time watch it's ok.

I’m treating this as a season since basically that’s what it is, a mini season and continuation from where the 1st season ended. I’m very confused as to why the studio decided to go this route though, they made 2 movies, recapping the first season and another adopting like half a season of new stuff. Wouldn’t it be better if they invest all of these resources into regular episodes? Especially since the pace of a good movie completely flew over their heads. I mean if you call it a movie, it better be one, not just episodes glued together. What the fuck was that pace? You just go into 10 mins of backstory and then immediately escalate to the crescendo of the movie? Sorry dude, that just doesn’t work and it did not work. Alas, wtf do I know right…

The show continues to provoke feelings with the cheapest way, so we get more torture porn. We get Reg’s torture at the start, then Prushka’s later. We get disturbing images like the patamon licking Prushka’s liquids, the same patamon that for whatever reason when it is gifted to the little girl it drops two turds in our face for whatever reason. We see the poor creatures that look like Mitty, what we don’t see, is something new or interesting about the world and it’s origins, something meaningful, something that would pour some more soul in the lifeless scenery. I guess we find out something about the whit whistles, that’s something I guess.

Nanachi continues to be the best character of the show, what saved the last season at the end and what’s holding together this one. We get two characters introduced in the movie, Bondrewd and Prushka. Bondrewd is overpowered as fuck and completely a piece of shit, a total cunt. The show for whatever reason tries to make him a plasuible character and convince us that we should care about him in the slightest, or even consider like genius viewers that we are that he had a purpose in doing all that so our little girl-scout can get her white whistle. Well… nope, he is just a piece of shit, and a stupid piece of shit at that, going through all that trouble with Prushka just to turn her into a cartridge, why? I mean the other cartridges worked just fine didn’t they? Anyway fuck Bondrewd, what about Prushka? Well we have to feel sorry for her cause torture porn, she is a victim, she is somewhat smart except she is completely stupid and gullible, and became a white whistle for our girl because she knew her for… a couple of hours, so they became BFFs and developed an unbreakable bond. Well, slap my ass and call me Suzy dude, I really wish everything was that so easy in storytelling, so convenient.

Animation continues to be splendid, even though we didn’t enjoy much scenery, just a couple of places and a couple of creatures that weren’t too fascinating, still everything was animated beautifully. Presentation is still the show’s saving grace.

Sound is excellent once again, same with effects. The new voices are great, Bondrewd’s voice fits perfectly and does a great job. As for Prushka’s, what I can I say anymore, you can probably give any character at this point to Inori Minase and she will make him likable. Not that Prushka is terrible or anything, but her VA is the main reason she is likable.

So, this movie changed nothing for me, I still believe this show had enormous potential, still believe it is wasting it, still in love with the premise and I’m still gonna keep believing and waiting for the show to become great cause I know it can be. Ah… will I ever learn…

I'm going to keep this spoiler-free. This story is the continuation of the first season.

So many feels. It's a dark tale, to be sure.

The characters are complicated. Whatever you think is the "cliche" character, throw that away because this anime, this movie will rend what you know. I just love the story and how the characters are portrayed.

On the lore, this movie explains so much more stuff, things that you can't see the next season without knowing.

It's simple: watch this beautiful anime.

Ill be putting this review together based on the entirety of the series thus far. First off, watch the anime series before this movie, as the 3rd movie is a direct continuation of the anime series. This movie and series is a work of art. The only reason i gave a 9 for characters is because im not the biggest fan of children in stories, as the story's character developement tends to be a bit more immature. That being said, while character developement is slightly lacking, its still very well put together, and the creators dont hold back showing what its like for a small child to go through the trials and horrors of the abyss itself. Overall, the story is amazing, and a new idea which is always welcome. As the characters delve deeper, you cant help but to watch in awe as you witness some of the things the abyss has to offer. Similarly, as the characters delve deeper, you cant help but to watch in horror as you witness some of the horrifying things that are at risk the further you go down. The soundtrack is phenominal, and i actually listened to the soundtrack on my own before watching this in its entirety, which should speak volumes about how well Kevin Penkin and others made the music. Animation is great, though nothing really close to something like Demon Slayer, its style is fitting for the story. Im obsessed with nature and the idea of exploration, so this hit a niche i am a part of deeply.

omfg this was soooo good everything, the animation, THE SOUNDTRACKS ARE SO FRICKING GOOD OMFG the characters everything and damn it was so saaaaaad why the heck is this show so underrated?! Really cant wait for the next season/film (`^w^)!  would recomend.