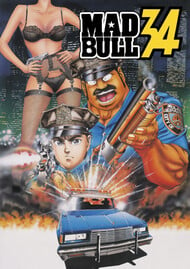 Story: The story follows two beat cops in the 34th District of New York. In the classic good-cop, bad-cop scenario, they fight crime, patrol the mean streets, and bang hookers. Wait, what was that last part? Oh yeah, Sleepy (or Mad Bull) is apparently the greatest pimp in a uniform. Several times, the plot vears off course, taking us into the realm of hentai with Sleepy's parnter, Daizaburo, waiting for him in the cop car outside. Perhaps the best example of this anime's bat-shit-crazy antics is the crotch grenades, or perhaps the Green Goblin look-a-like, Capricorn. Whether the anime uses kitten-sized bullets to render head from body, or John Estes in drag to fight crime... the viewer will be left scratching their head in bewilderment.  Animation: This animation left me feeling overly grateful for the new advances in CGI and animation as a whole. Which is odd, because I usually feel a rush of nostalgia for my childhood when I watch early 1990's animation. Perhaps it was the rather racist depiction of some characters, or the poorly done "fountain of blood" that usually accompanied a bullet wound, or maybe, just maybe, it was Sleepy's porn-stache that threw me for a loop.  Sound: For extra comedy, the viewer needs to watch the English dubbed version. Why? Because it proves that not all British actors can fake a New England accent (especially not New Yorkers). The opening (what little there was) reminded me of an 1980's cops and robbers film, which I guess was the effect it was meant to have. However, the rest of the music in the show was overshadowed by the bad dubbing. Especially the Chinese assassins who often sounded more like Boris and Natasha than they sounded Chinese.  Characters: The women, even smooth talking, gun-toting Detective Perrine, were either useless or a distraction for the male cast. Including one spoilerific female who will remain unnamed. If they aren't white, or in Daizaburo's case, effeminate, the male cast are stereotypical and horribly overdone.  Overall: I rather disliked this anime. Yes, there were times when the anime got so bad, it was humorous. No, this did not help the anime's cause. If, however, you are looking for something to make your eyes bleed and your ears ring for hours on end, I would suggest giving Mad Bull a try.

This anime is as hentai as non-hentai can get - by AP standards. Uncovered female breasts have more screen time then the two main characters combined. Prostitution is the main focus of the story. Swearing barely escapes a single sentence: English Dub version went as foul as possible. If you're into those sorts of things then you are also in for: Corrupt and brass police officers, in your face media, Alien rip-off costumes, rushed marriages, and more sex. Animation is sloopy and not appealing, none of the character designs stand out or are easy on the eyes, running is agonizing for those with sight and mouth movements aren’t synced all that well. The most enjoyable thing about this anime was the single line from 4th and final installment --> that's his problem soldier, now fire." when Speedy is in the way of taking down a certain someone.

Mad Bull is a smutty buddy cop miniseries that's just the right amount of bad that it's kind of good, in the laughable and cringey sense. It's not very long and it's a fairly easy watch, so I recommend watching at least the first two episodes for the sake of realizing and reflecting that this kind of thing even exists. Probably best with suitably-minded friends and alcohol. It's still really bad, though. 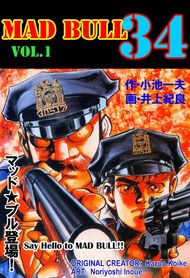