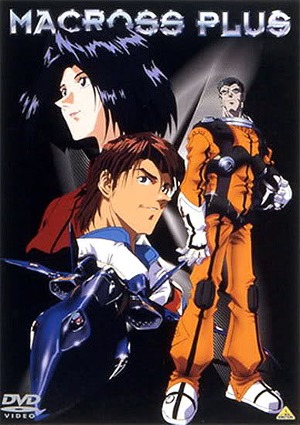 My only misgiving about Macross Plus: The Movie is that it doesn't have one exceptional feature to speak of; instead of being a one-trick pony, it appears to be respectably good at everything, be it characterisation, animation, script, plot, or anything else you might consider important. The result is an anime that is remarkably free of major flaws, well-rounded, wholly enjoyable, but ultimately not as mind-blowing as it would like to be.

As ludicrous as it sounds in theory, the idea of a digitised pop idol causing havoc for humanity is executed well in practice. For one, Sharon Apple's psychedelic concept is inventive and yet portrayed in a not-too-cheesy manner; most importantly, despite being firmly a member of the mecha family, Macross Plus is a romance at heart, keeping the political-military conflict in the background until the final act. This unique approach means that there is a consistent emotional polish to what would otherwise have been a very clichéd product.

Although some might approach this title with the awareness that Shinichiro Watanabe (Cowboy Bebop, Samurai Champloo) co-directed it, I would warn against any expectations of finding his usual stylistic flare here. Macross Plus doesn't involve any genre-blending gimmicks and instead chooses to stick to straightforward themes... which might be one reason why it never reaches the heights it could have. As far as effectiveness goes, Macross Plus is undoubtedly entertaining but also rather transient; despite a surprising twist and an action-packed ending I still ended up walking away with no lingering thoughts or lasting impressions. In the face of this shortcoming a more distinctive style certainly wouldn't have hurt.

Being consistent, detailed, and punctuated by Sharon's visually hypnotic concerts, the only real complaint I have regarding Macross Plus' animation is that it looks and feels too dated. From the slightly unattractive character designs to the sharp colour tones, none of it will come across quite as stunning as it might have when the movie was first released. However, if like me, such things don't bother you at all, then appreciating the skilful use of CGI during the fighter jet sequences should be that much easier.

Macross Plus' music will probably not be to everyone's tastes, but something about the eerie beats and sensual vocals of Sharon's repertoire really capture my imagination. My favourite of her songs has to be the chorus used in the very end battle, which creates quite a frightening, edgy atmosphere. Incidentally, I just knew it was Yoko Kanno before I checked the box for confirmation.

Even when Sharon isn't singing, the score still makes for a varied and fun mood-setter; from rich orchestral pieces during mecha flights to minimalist Western strums of the guitar, there is a lot to enjoy here. I suspect, though, that very little of it is worth listening to outside of the context of the movie, and unless it comes as part of a general Yoko Kanno collection, I really won't be spending money on it.

As for the voice actors, they are fitting in all cases. None of them stand out so much but they work well with the script and generally provided believable performances.

While Isamu is of the stereotypical hot-headed type who does things because it suits him, Myung and Guld possess extra layers which make their love triangle rather refreshing to watch. Myung is a career woman with definite talents and an atypical calmness. I particularly like the way she retains a mature and fair manner despite being trapped between her squabbling friends; she is never bland or emotionless, but neither is she irrationally violent or a ‘beautiful victim' stereotype. Guld is at face value the self-possessed opposite to Isamu, although it quickly becomes clear that he isn't as predictable as he seems. I feel his role is the one with the most emotional impact and easily the most interesting performance in the entire movie.

Beyond the three protagonists there isn't even one other character that I could name, and I have seen this movie more times than most of my favourite series! They are nothing more than forgettable stock personalities put in to pad out the world of Macross Plus.

Needless to say, Macross Plus is not the first anime that springs to mind when I consider what to recommend to other fans of the mecha or romance genres, which is simply because it isn't the most memorable of shows. Sure, it is unlikely to make anybody's top favourites, but it is undeniably an all-round decent anime that anyone bar those in the extreme margins could enjoy at least once.