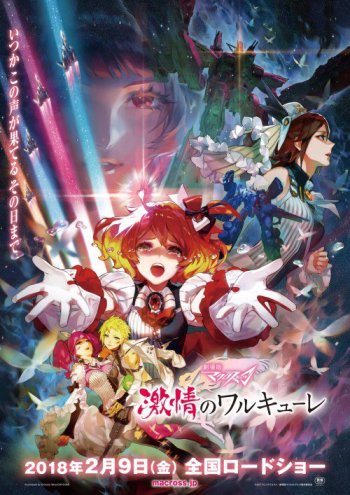 Macross Delta: Passionate Walküre is not a good movie. I’m a firm believer that Delta’s story can be told in the length of a film. And I appreciate that Shoji Kawamori tends to go a long way with how he animates and edits a majority of scenes in his “recap” films to tell a story that’s true to the original without seeming choppy. It was only really Macross FB7, the Macross 7 recap movie, that he obviously didn’t give a shit.

However, the editing and the pacing of this movie are still really poor—sometimes annoyingly so. It covers its bases to get the point across, and I’d take this over most recap films, but it’s very awkward. Shots are regularly inconsistent with their lighting and the placement of the characters on screen. How their shown can even change from one shot to the next, like with a scene where the character Messer has a crutch in some shots and not others because he wasn’t featured in the original aftermath of a battle beforehand.

Some scenes struck me as tone-deaf as well since it’d be trying to accomplish more than one thing at once. Maybe if this movie had more original animation (THAT WASN’T CG) and wasn’t mostly the original show cut in a new order, this could have worked. But I’m aware Kawamori’s original script for this movie was three hours, chopped down to two hours, and was given basically no money to make it happen.

But okay, are there any positives to it? Well yeah. Messer, who was the best character from the show, sticks around longer to have a bigger influence on the ending; and all of the worst scenes with Hayate and Mirage were cut out as they start as fully developed characters from the beginning. And the entire second half of the series basically doesn’t exist with the exception of keeping Walküre’s origin story and Freyja’s birthday party—the single worst and best episodes in the show respectively.

But these cuts do raise some questions like, “why does Hayate pilot without a helmet?” The answer is stupid, so it’s a loss either way. You’re either left confused from the movie, or bashing your head against a wall for knowing from the show.

But the saddest part of it all is that Passionate Walküre is trying to tell this action-packed story of the war between N.U.N.S/Xaos and Windermere when that was never the good part about Delta. The slice-of-life scenes made that show. The characters were always the most charming and the setting was always the most fascinating when people just walked around, interacted, and talked. Shoji Kawamori’s original idea for Macross Delta was that it would be a slice-of-life story about the two teams, Walküre and Delta Flight, learning to work together; with a romantic b-plot for Hayate and Freyja as he’d be her dance instructor. And Kawamori’s sponsors shot that down in a heartbeat because it wasn’t marketable. I would love to watch a slice-of-life in space, and you could tell those were the scenes in the show that had the most heart poured into them. Not here. Not this war story that’s flat, boring, dull, and a rehash of Macross Frontier’s plot told much, much worse.

This film makes the worst parts of Macross Delta digestible, but it does not offer anything new to boost its quality overall. It’s a bad movie adapting what was already a bad story, and made it a bigger waste of time than before.