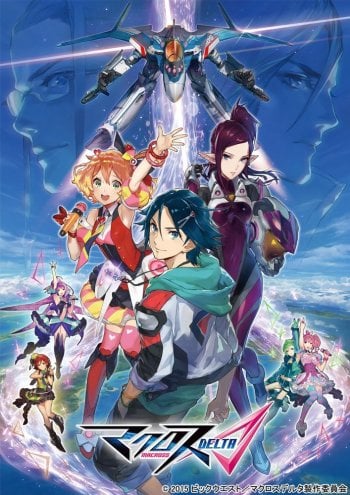 Set in the year 2067, Walküre, a team of talented idols and the Delta Squadron, a team of experienced Valkyrie battle against the Var Syndrome, a mysterious phenomena that is consuming the galaxy and there is also the mysterious Aerial Knights Valkyrie fighter team of the Kingdom of Wind.

Amending a review for a show you originally thought was a mediocre mess only to be surprised by a solid second act, is very rare. In fact, I am not sure it has happened to me yet. Ah Macross... You big beautiful mix of warfare and dancy pop numbers. Shredded mecha roar by with explosions everywhere all the while a songstress (or plural) belt out love ballads. meanwhile a love triangle (mostly 2 girls and 1 guy, with a couple exceptions) forms and causes for great soapy drama.  Originally I noted the fact that in the first 10-12 episodes it felt like the creators threw in everything but the kitchen sink. They Jam it with not only 1 or 2 pop stars, they up the ante and give us a whole pop group, while even the opposing antagonists have their own boy singer! Protoculture talk gets more screen time, we add in a virus, and some more political intrigue.  I felt like the title did not know where to stop with the layers.  And there was the ultimate issue. It never seemed to have the time in 26 episodes to fully fill out any one aspect of the show. Build up of the love triangle falls apart, and so does any possibility of a true goal.  Example right from the begining: (Slightly spoilerish for only episode 1-2)  Apparently, a pop group called Walkure can defeat this infection/syndrome with trans-dimensional music and have a mecha wing called Delta to help combat shit. Meanwhile a capable forklift-mecha driving boy (who knows how to keep a beat) helps out a stowaway named Freyja who hopped an apple container heading to where Walkure are based out of, to become one of the group.  Bad guys show up in the way of a massive infestation in the brains of some old-school Zentradi/Meltrandi as they decide to go ballistic in some Regult Pods. Magical girl pop band are sent in to save the day. (the magic is more technology, as their outfits sparkle and shimmer into pop-idol sherbet outfits.)  Now, in the course of Episode 0-1 to 2 there is so much coming at you, it is hard to take it all in. The direction seems to not know how to slowly build a moment what-so-ever and just toss you into a lake of story and hope you can swim.  I know it is because I am a cranky old cuss, but it does not “feel” Macross-y. In fact it feels like Shoji Kawamori, Macross creator, wanted to get as much in during the first episodes as possible.  Sure it is cheesy as hell, having all this glorious singing while the Walkre change outfits and glam out during combat. The reasoning takes a bit of just going with it, type of mentality. But here is where the title rights the ship a bit. About episode 10 I found myself starting to like the cast and the show started to gain traction. By episode 12/13 it hits the end of what could be a great half point The buildup of the Windermerians back story adds weight to their plight. Also, the overall threat builds to a more believable level. But when you get to the end of episode 26, so much shit is coming at you, and everysong is belted out, that by the end you are left not really caring what happens. it was either too many things happening, or everything was happening too quickly.  Now all that said, the action is fast and furious. Maybe too fast and furious, for the only battle you will end up caring about is the occasional fight between the White Knight and Hayete.  The pop-songs are fun, and could make for a heck of a soundtrack. But god, the cheese is even worse than Macross 7 with the Sound force. The Animation for the most part was solid and sharp. But it does not feel special. In fact it feels like the progress since Macross Frontier was non-existant, and not that impressive. The only “better” part would be the CG rendered Mecha. Let’s face it, Kawamori, knows how to design mecha. The character designs are super glossy and not very original in my book.  Now , it might be good to have some familiarity with the franchise before jumping in. You will not understand the giant Zentradi much, or the fact that “culture” has a lot to do with the title. I might put up a watching order of shows someday, but you will probably want to see the original macross, Macross Love Do You Remember, Macross 7 and Macross Frontier and it's two movies to get the full effect of the title. .

I've watched the whole Frontier and gave a good review. But I dropped this at episode 1. It's an Idol parade killing every other aspect of this Anime with low budget alike songs.

TL;DR Don't watch this if you have something better to do. Make sure you watch SDF Macross, Macross 7, and Macross Frontier before watching this to avoid suffocation. As a giant macross fan (6'3''), this one was almost as disappointing as macross 7. It feels more like a mahou shoujo for the first 6 or so episodes, reaches a macross level peak in perfomance at 12/13. And then has a truly dull ending. I felt a slight rush of emotion right at the very beginning of 26, but then it quickly died out, and i just sort of sat there waiting for it to end. This show doesn't seem to know what it is. There is an idea for a story, but they also feel like they have to reference every other macross ever, which was... not necessary. It really bogs things down with useless clips, and then, because they do that so much around 17, they have an episode with an exposition dump. Which in film is just TERRRRRIIIIIIBBBBLLLLLLLEEEEEEEE. I wanted to skip that episode, but the information seemed important. Maybe they should have just shown us that info  and let us infer it instead of telling us about past singers. The sonds are... sometimes exciting, and adhere to the strong macross tradition of naming the songs stupid stuff like "Love's Halation the War." Wtf does that even mean? Then they also have songs that very cleverly have lyrics that match exactly what is happening on the screeen. yessssssss. Was good. HOWEVER, a big part of macross is the masterpiece of the background music being solid enough to just play by itself and be an enjoyable experience. Every other macross has done this, with Yoko Kano's work in  frontier being the best, but this one just doesn't. It has sounds from older series woven in, but it is just mood music. Nothing to captivate. Oh, and the climax song isn't energetic. I mean.... no, the big battle song always sends chills down the spine. Overall, I'll be buying the soundtrack, and skipping 3/4 of it. Animation tries and fails. Its like a straight copy of frontier, except that this time you can't see anything in the fights because theres a giant girl face in the way. wooooo! I have no idea whats going on in this battle. Also, each macross had something unique to each character to show their expression. The girl character i mean. Minmay had an amazing voice actress, macross 7's girl had that puffy thing that mirrored her emotions, and ranka had the hair that moved on its own. Freya has the hair again... 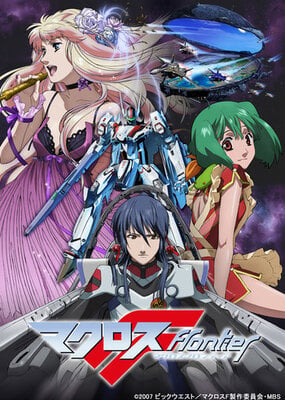 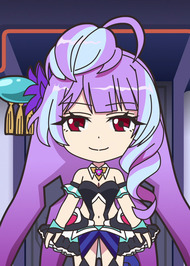 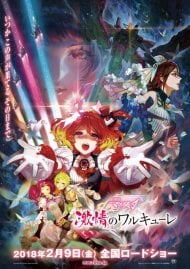 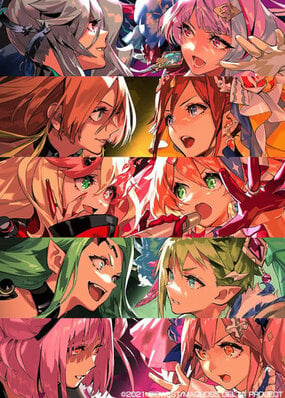 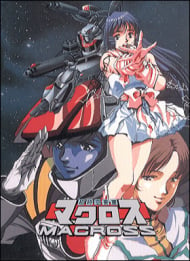 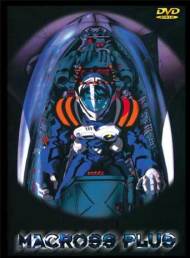 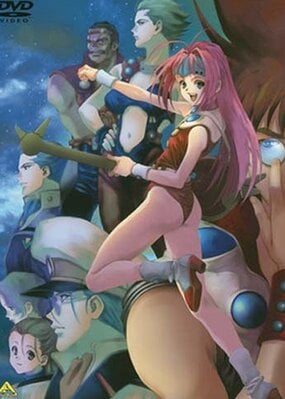 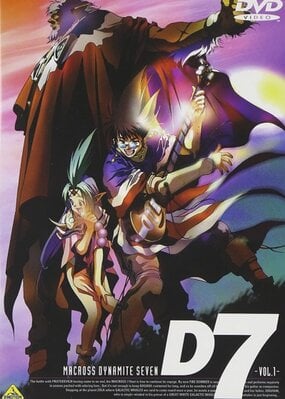 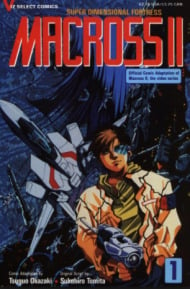 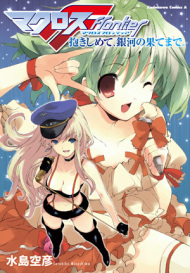 Macross Frontier: Hold Me Tight to the End of the Galaxy 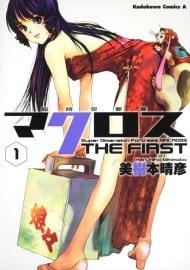 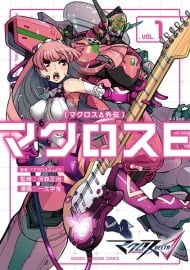 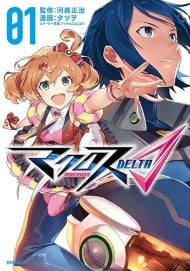 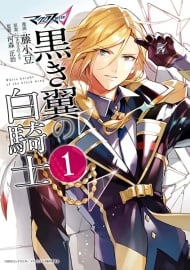 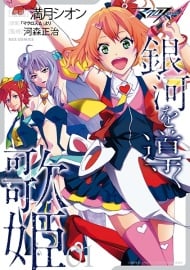