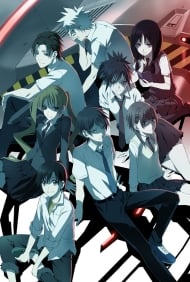 There is distorted, deep blackness everywhere. That place, in which blackness swallowed everything and took away everything, has become known as the avidya zone. Strange beings assume the very form of the despair and chaos of humanity. They are known by this name: Imashime. An expedition surveys the avidya zone which consumes human spirits. So, in the intricate intersection between the present in impending crisis and the destiny of the past … can eight boys and girls, assembled to confront the Imashime, find the bright future that lies before the avidya zone?

This was a really good anime. It is a bit dark but it teachs a moral lesson about people who are trapped in their own darkness and only seek light. Some might not understand this but many do. The story line itself is really good, it does seem very confusing at the start but you start to understand the why part later on as the story progresses. The story line is dark and psychological along with a bit of scifi. The animation is really good, the artists really put effort into the background and looks really good espacially if played in HD along with the sound that makes you feel as if you are part of the action. The characters are all very paasionate and intelligent kids. The main character is not a wimp (unlike in neon genesis) and is very strong willed even though he locks away his heart from others by trying to to feel pain. Overall story was really good and i enjoyed watching it to the very end. I cant really say much since it would spoil the show. I've watched alot of good pyschological shows and M3 is one of my favorite for this year. I hope more anime comes out like this one.

So. I watched this a while back and made a review 12 episodes in. Forgot this review existed. Here we go. The story was okay but became shitty near the end. I mean, yeah, I really did like this at first because it was interesting, but then some stuff happened and dropped it some, and then the actual ending itself was just... meh. For a dark series with dark color palettes the ending was just too... light. It wasn't satisfying. It wasnt bad though. The animation was okay, nothing great. CG was done pretty good. I know it says "Satelight" on there as of today (4/30/18), but soon Im going to spam the A-P devs with anime that need studio corrections. This is one of them. M3 was co-produced between Satelight and C2C (a studio they've teamed up with many many times). Oh yeah, cool dark and edgy color palettes. Voice acting wasnt phenomenol, but it was pretty good. The first opening is fucking god, cant remember if there's a second one. The OST is pretty okay, and the sound effects are okay as well. Yeah... Some characters developed nicely, other developed not as nicely. That's okay, though I enjoyed it, that's all that matters right? Yeah... that's coming from a guy who cried watching Mushishi episodes... whatever. The only actual turn offs this seris has was, once again, the ending. Another bit is that one homicidal character- yeah, he wasn't a good character. His personality can literally be defined as "edgy teen dries to shoot up the school" except he uses a giant mecha and tries to kill something or someone else in a very psychopathic way. O well. 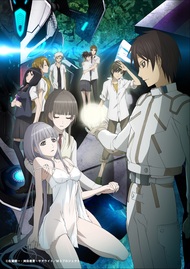