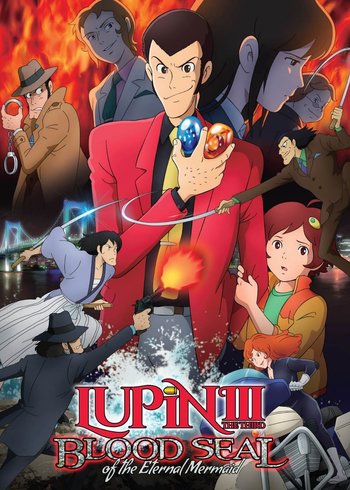 As far as Lupin movies/OAV's/TV Specials go, this is a steady Lupin title. It pulls all the right lupin-ish momnets and even has a great comical escape, But it does foray into something that many Lupin series do not go. Instead of just a treasure and a baddy who wants it the Lupin jumps for a little bit of the supernatural.  In fact it does this so much better than the Pycal special.

Now this is not completely out of the relm of Lupin, I mean he has driven a car along the side of a moutain, jumped out of a burning plane unscathed and his partiners have done everything under the sun from cutting lightning, or waves to shooing every bad guy with only a 6 chamber revolver, but this time Lupin deals with not only unbelievablity, but actual supernatural character.

The animation is very solid and the action is well done, there is the Lupin look that is more akin to the softer Lupin look of Castle of Cagliostro or Fuma Conspiriousy of the Fujiko Mine series, or the zany Bye Bye liberty Crisis Lupin.

The sound is OK, but nothing to stand out. With the change of voices (one by one) I am only now becoming accustomed to the cast changing guard. Although the old voice of Zenigata was getting very warbly.

Overall this Lupin special was good, and I enjoyed that I watched it after a small hiatus of Lupin titles.