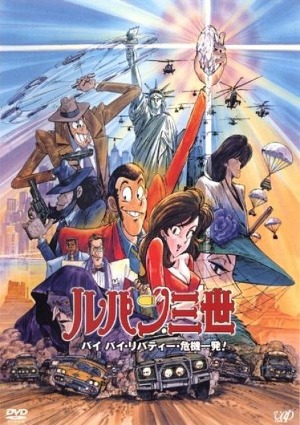 Bye-Bye Liberty Crisis / Goodbye Lady Liberty(Bai Bai Ribatī – Kiki Ippatsu!, 1989) was Lupin's first television special, and it was an excellent debut of Lupin's power to hold an audience for more than the mere 20-some-odd minute episode.

Lupin has got to get with the times in this movie because the police have been tracing his every step using the "crime-portfolio" Zenigata and the rest of the police over the world have in their computers.

Lupin has to call upon a few new friends so he can survive in a world with changing technology and we'll get to see the usually tech-savvy Lupin fall on his face when he's outsmarted by a few computer simulations; though even computer simulations don't have the sort of know-how Lupin has.

Another red-coat installment does the funny bone good as we watch Lupin make fun of pop-culture from all over and makes off with a haul so grand it has to be hidden at the Grand Canyon.  Soon though Lupin finds out that, as usual, there is someone else after his loot and this time he has to deal with the "Three Masons" who hold a mirror image to the rumors and occult secrets around the Free Masons.

The animation is on par with the rest of the series and the voice acting is excellent, the new characters are great; although a little under-developed, if you're the sentimental type then the ending might give a few tugs on your heart strings, but overall we're looking at an action-comedy-mystery with all the punchlines and slapstick a Lupin fan is used to.

It's only an hour and a half long and I think you'll be reaching for the next installment of the Lupin TV-specials as soon as the credits start rolling.  The essence of Lupin was brilliantly captured in this one, it's a real diamond.  Another super-egg perhaps.