Alt title: The Legend of Luo Xiaohei: The Gate of All Living Beings 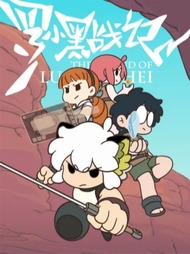 161 users are tracking this. Log in to see stats.

2 years almost to the day since I reviewed the first season, and I'm so excited to have the opportunity to watch a second series. Before I get to a real review, I'll provide a spoiler-free synopsis since it's currently lacking one.  SYNOPSIS:  Xiaohei, Xiaobai, and Agen are joined by red-headed Shanxing, the residential expert on the release of a new game, "All Living Creatures." The video game is a highly immersive MMO VR game where players can choose to be any creature then receive relevant in-game quests. As it so happens, Xiaohei's training left by his shifu coincide perfectly with the game.  SPOILER-FREE REVIEW (warning, this section will contain spoilers for the prequel series and movie)  While the story is a direct sequel to the original series, it seems to more directly correspond to the movie, and I'm actually delighted it is. The movie had major moral plot holes that season 2 is beginning to address. My biggest complaint however is with the animation. While season 1 has high highs and low lows, season 2 aims for consistency with a style that's very reminiscent of All Saints Street. Unfortunately, I think LXH ultimately suffers for this as everything is "evened-out." The colors are always vibrant, but I'm less impressed by the action scenes. I also think season 2 has lost some of the humor from season 1. Despite these negative critiques, I'm super excited for some of the subtler plot points season 2 implies for the future of both this universe and for Xiaohei himself.  Is this series one of my favorites of all animation? Yes. Is it perfect? No. Not yet, at least. And criticism is my expression of love.  !--- Spoilers ahead ---! I'm disappointed we don't get to revisit the antagonists and elfins we met in season 1 (yet), so it's equally challenging to imagine how little character growth is incorporated into the story. However, I'm going to operate on the assumption that there will be future content because the creators have certainly implied there's so much more they want to tell. LXH seems to be operating on two levels that are in-sync with each other on the macrocosm and microcosm. As introduced more firmly in the movie, there an issue in the world with separation of humanity from nature -- and elfins, who are a representation of both but more firmly in nature. Season 2 utilizes "simulated nature" as a type of language/medium by elfins for humans to begin their reconnection to the natural world alongside elfins who have never lost touch while they continue their spiritual training. Season 2 is very explicit with this purpose. "Humans can reconnect with elfins. And elfins can reconnect with humans." One of my favorite scenes from this season was witnessing players separate game prestige from relational morality when one nameless player is being robbed IRL. All the other players surrounding him stop mid-fight to watch a video in-game of the robbery and allow him space to leave. By having the game replicate as close to reality as possible, the game incentives morality without reducing the fun. Since players in the game only experience temporary death (an intentional decision I think by the game designer as characters in the story and by the series creator to represent "reincarnation"), it benefits the players more to not cultivate vengeance. If someone loses a fight fairly, there's a significantly smaller chance of your character being "sniped" in the future.  So we have numerous examples of humans reconnecting with natural morality alongside humans regaining spiritual power, both in-game and in reality, and that means somethingfor the progress of humanity in this world. At the same, we have yet to see Xiaohei, who symbolizes the bridge between humans and elfins, grapple with what this means. Like any overpowered main character, he's given tasks to complete that test his strength and give us, the audience, something entertaining to see and invest in. Unlike other super-powered heroes though, we see tasks that are somewhat... unusual on his quest to become buff, such as befriending humans and having them help with his tasks. Heroes are heroes because they're unique in their strength, right? This is actually a trope I'm increasingly hating in Western and Japanese media. It feeds to the propaganda machine that we can fix things as individuals. "Climate change can be solved if we all just recycled a little more." So when Wuxian said he had never intended for Xiaohei, a literal child, to complete his quest, I was very verbally ecstatic. As the conversation between master and student progresses in the final episode, Xiaohei's silly and childish responses that represent his eagerness to imitate the adult he admires most in the world lacks a depth of understanding that Wuxian recognizes. Wuxian is truly a shifu, not because he is strong, but because he possesses an intense wisdom that allows him to guide Xiaohei into gaining this knowledge without dampening his spirits and utilizing Xiaohei's joys as inspiration for progress. He emphasizes community and friendship as sources of strength, and perhaps most importantly, he teaches Xiaohei that failure is an important step for progress, just as it is for the humans who, in this simulated game, are allowed the opportunity to adjust and grow without real-world consequences, guided by the expertise of elfins. Finally, we're ready to witness real character growth in future content. I'm beyond excited to see what new trials Wuxian has prepared and how Xiaohei matures. I'm excited to witness this healing bond between humanity, elfins, and nature, and I hope that we see more complex conflicts play out with the return of previous characters. Media is an opportunity for us to witness our fantasies play out and provide ideas for blueprints for our future. That's why The Legend of Luoxiaohei is one of my favorite series, inspiring hope and teaching the Xiaoheis of the world Wuxian's wisdom. I hope my reviews have encouraged you to watch this series as well. 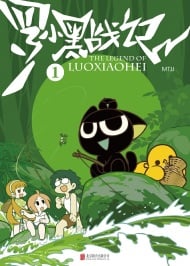