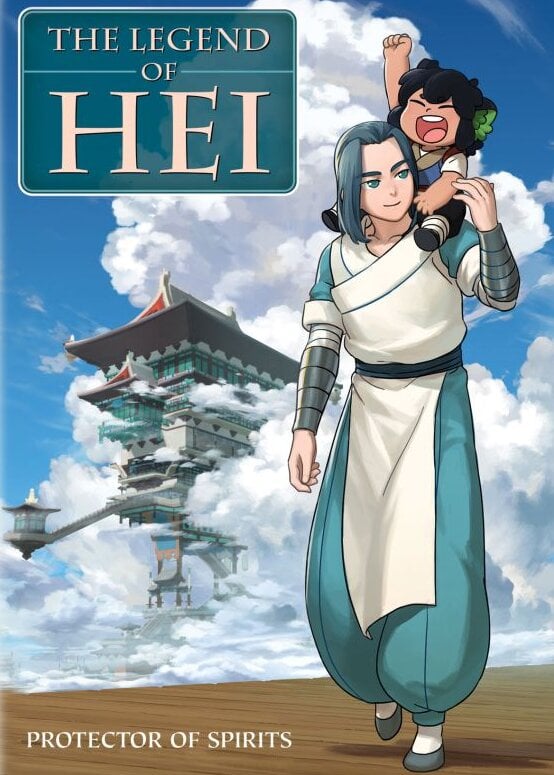 OMG! This is sooooo underrated!!! The movie is so good! The story is amazing...fight scenes are epic! People who haven't watched this are missing out... Love it!

The prequel to the web series. Follows Xiao Hei as a wandering child who is adopted by a band of elfens who resent humans as much as he does. They have made their home in a forest when a human attacks them and takes Xiao Hei hostage adrift at sea.

The story is a familiar environmentalism story that loses points for triteness and fails to confront real problems presented by the antagonists. It is still as charming and sweet as the original storytelling, and the animation is a step above. It's a necessary watch for fans of the original, and it details Xiao Hei's "origin story."

I would recommend watching the web series first. The mystery of Xiao Hei's power is what adds to the fun of the series, and with how disappointingly it ends, this movie satisfies the void the series leaves us with.

WOW amazing animated movie!The animation is amazing. I love the main characters. It can be confusing how the words they say are in chinese but I thonk that is doesn't matter that much. the story is about a boy/cat and you'll fall in love with him beacuse he is sooo cuutee.

fight scenes are one of the bests I ever saw. This movie deserves more

I have yet to finish watching the original, so keep that in mind! Also spoilers ahead but I'll try to keep it minimal.

Theme: I love how the story was developed! The ambiguity of right from wrong and how the audience has to follow Xiao Hei's journey to learn who to trust and who is morally correct is an amazing journey. As for the "villain" of the movie, I sympathized with them and could understand where they were coming from. It was difficult to root for a specific side and their ending was bittersweet. (They just wanted something beautiful.) It is a somewhat environmental story, but it's not a pro-environment story. If you consider it one, you'll find the lesson flat and basic. It's more about prejudice and the extremes of it from a minority perspective. Loved it!

Plot: I found the progression of the story to be a bit slow for my taste but the attention to detail and slow reveal of everything is well paced. There's a few plot holes but overall great! I loved the humor of this movie and how it added to the personality of the characters!

World: Of course, I don't know much about the world Hei lives in, but the movie does a decent job of letting you know what you need. However, it's such an intriguing concept and the different groups and societies introduced is something I would love to continue exploring! This world is rich and well established.

The fight scenes have some amazing choreography that I don't find in other movies or shows. This is something I've noticed with Chinese animation in general. There's also tons of scenes that take place in the ocean, and I'm impressed by the effort put into 2D water animation. The background illustrations are gorgeous, especialy the scenic ones. My one critique is that the city, when in a spirit realm, was very obviously 3D modeled but still, the damage done to the buildings during the fights is carefully retained.

Absolutely my favorite part! All the characters are interesting and I would have loved to have more development on the background characters. I do wish we could see what happened to them after the fight since the epilogue is short but it's understandable that they are not the focus of the film. The characters we do see have consistent morals and personality throughout the entire film. The nuances in each character's personal beliefs really stuck with me. One of the "bad guys" protested against injuring Xiao Hei, and I just really liked that, despite how ineffective it was plot-wise.

I was also way too excited to see Nezha, since I didn't expect a Chinese deity to make an appearance. His design is gorgeous. All of their designs are gorgeous.

Final note: Watching it a second time, I pick up on a lot of things! Also there's things that are not explained because they are explained in the original series. Well developed movie with incredibly enjoyable characters! The story was the weakest part for me, but it wasn't anything that took away from the movie overall.

One of the sweetest movies I have ever seen! The art style is kinda simple but charming and the animation..... THE ANIMATION IS FREAKIN AWESOME! All the movements flow so smoothly despite the art being simplistic. The story is engrossing and cute. All the characters are pretty likable as well. Honestly, a must-watch for everyone who likes adventure and fantasy (especially those who like cats!).