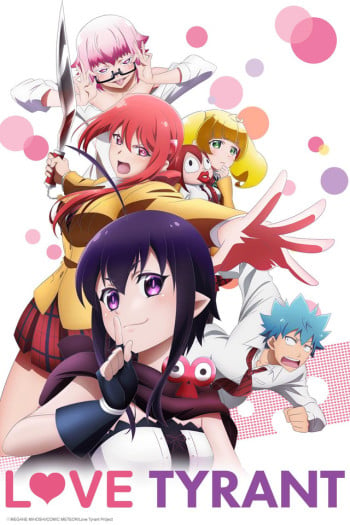 Love Tyrant Episode 5 - What Is Love? x Kami Is Prostrating Himself Now lolol

In a desperate struggle to find Seiji, Akane and Yuzu seem oddly worried when Guri tells them that he is off with Shikimi searching for her crush. The concern seems warranted when Seiji finds himself in the midst of a torture session with Shikimi. According to this mistress of disguise her ultimate goal isn't just Seiji, but Akane and Yuzu. What is her link to the two sisters and what is it that she's after? And just what has Seiji been dragged into this time? Akane fights Shikimi fiercely to keep the truth hidden. Just when everything seems resolved, Seiji has stopped breathing!

I'm Getting In on This, Too x Whoa! Forbidden Love?!

Sniff Sniff x The Only One Who May Hurt Seiji-kun... Is Me

I Can Handle This Myself! x Wassup

I'm Not Going to Lose! x Are You Like Me?

What Is Love? x Kami Is Prostrating Himself Now lolol

Go to the Beach With Me? x It's Not a Matter of Knowing or Not

It's a Festival x How Did It Come to This?!

Absolutely... Nothing... x There's Just Something Wrong With Me...

Where Did She Go? x I Apologize for Troubling You Until Now

Love Tyrant and Konosuba are both very ridiculous and over the top anime in regards to the story and characters and they are both comedies.

I find the Love Tyrant is much more ridiculous and all over the place. The jokes also fall flat for me half of the time.

Konosuba while ridiculous has a lot of heart and some wonderful characters that are developed beautifully.

If you enjoy Love Tyrant I can't see a reason you wouldn't like Konosuba expect that Konosuba is a bit slower with it's story but that pays off big time.

If you like Konosuba then you might like Love Tyrant but don't think for a second that it will be anything near that brilliance. But Love Tyrant is fun, I recommend watching it with a group of friends.

Even though the two topics and settings are completely different, they are still pretty similar with their comedy. Both stories don't need a good plot or good action scenes because they are pure comedy anime where nothing has to make sense to the plot or story. They both use a lot of plot conveniences, but it doesn't matter. Even in the "serious" battle moments, they also stick something in there to remind you that it is a comedy anime and to not take it too seriously.

Both animes also have characters that are practically made for comedy, like a powerful and winney godess that has below average intelligence and a compulsive cupid who doesn't even know what love is. These characters and more can only exist properly in a purely comedic world.

Overall, Renai Boukun and KonoSuba both make great animes and if you like one, you are sure to enjoy the other.

Couldn't help watching one without being reminded of the other. They are very different anime with one tilting more towards comedy and the other tilting towards romance.