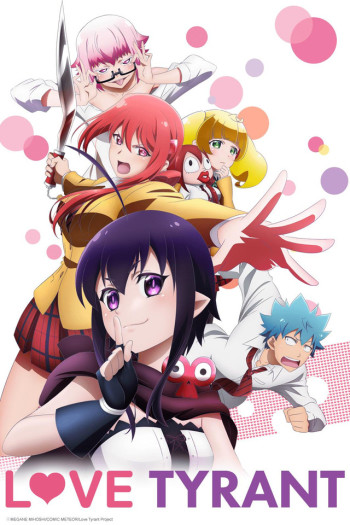 it starts of really likeable and funny, but a few episodes in it seems as if the writers ran out of plot

if you're looking for an anime to watch half-way and stop (for some reason). then i guess you should watch this

no worth the time anyway

Love tyrant is one of those meme animes like Konosuba, it's not shit but you don't watch this for plot, you watch it for the vast variety of characters, it has all the element tsundere, yandere, air head, incest and m (people love hurting shit preferably humans), it may sound shit but this anime made me laugh. meaaaaaaa ヾ(ﾟ∀ﾟ○)ﾂ三ヾ(●ﾟ∀ﾟ)ﾉ .ﾟ☆(ノё∀ё)ノ☆ﾟ.

The story of the anime is very shallow. There are just many things that dont make sense in the anime even if it adopts a comedy genre. The animation could be sloppy at some moments. But I cant really find any reason to hate this anime. The plot may be absurd but I still find it enjoyable to watch due to its hilarity aspect. But im pretty sure that only males would enjoy watching this.

This anime is like no other in the harem genre (that I've seen). Its unique nature and quirky sense of humor are both its selling points and achilles heel. Its inability to maintain a serious tone for more than 4 seconds resulted in a lot of chuckles, but a loss in character depth. The character's strange traits made them initially intriguing, but since they were so distinctive, they were unable to believably develop past them. What idiosyncratic behavior started off as endearing, became burdensome, if not a tad annoying, by the end of the series.

It is clear that this show tried something different, and did it semi-successfully. I give it a clean 7 out of 10 for destroying anything that resembles a cookie cutter.

You should be able to tell if this anime is for you or not by the end of the first episode.

i have been dropping animes recently one after another. I was unable to like any of the them. Was looking for a anime with great plot. But after watching the first episode of this anime , it really hooked me up. All anime has up and down and some also slows down as it progress. This one has too but if you give it a chance you will really like it too. the character developement what i liked the most. And the comedy was original for me. And in this kind of anime you shouldnt look for good plot. the plot is average. But the way these characters held this anime made it good. Loved it, Enjoyed it and was not bored and also want second season too. Sorry for the gramatical mistakes. ^_^ :P