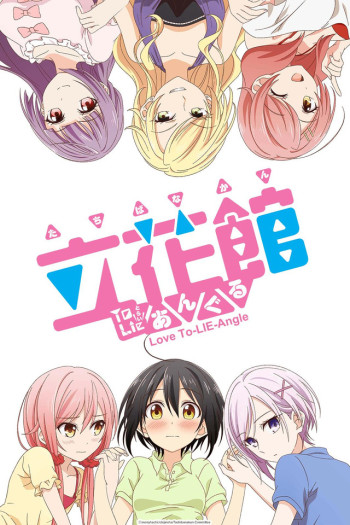 This anime is about a situation where the lucky pervert in harem anime was actually a female. Indeed it's a yuri harem anime and at this point the only true one at that, does that mean it's special? Not especially, no.

The story of love to Lie angle plays out like a standard harem anime but with even less of the intricacies of good story telling than most harem anime out there. While it's not the biggest failure ever it certainly is uninspired and feels lifeless a lot of the time. The setup are extremely typical and might be meant as a parody of sorts by copying everything that bland harem anime do. The whole setup actually ends up less of a harem and more of a love triangle. While true for a lot of harems this show with it's limited time basically only has two girls with enough screentime to be worth noting that are persuing the main character.

Limited animation and sound doesn't help much either. While the animation is limited thankfully the off-model moments of this anime are quite limited at least but by no means is this a graphical masterpiece. Same goes for the sounds design. The outro is at least catchy to some extent but won't be for everyone, the animation doesn't really help it either, again. The voice acting is okay, solid enough but forgetable yet again.

This anime isn't really worth watching. If you really want to have watched all the yuri shows or at least a lot of them you can pick this up easily. It takes no time to power through it all and it takes probably even less to forget what happpened throughout most of it's run despite being so short.  Nothing really makes this stand out from the crowd other than being ''yuri'' and a ''harem'' and I can say with confidence that this isn't enough of a parody to be imediately fun but it can't hold it's own in the way of writing either so it's neither a serious show nor a show that is particularly amusing. Uninspired from start to finish, this show simply existed.

Creators in Pack 2018 short episode lesbian-fest can be quite hard to watch and quite unfunny. It suffers from a problem it shares with similar short-episode anime in that the rapid-fire delivery goes way over the head of the audience. That loss may not be a problem for native Japanese speakers yet for a foreign audience this show can be quite baffling. It leads you wondering what the hell is going on and who the characters are. If you really care it might be worth giving it 100% of your attention and watching through each episode three times until you understand what-the-heck is happening. We really couldn’t be bothered but here is what we could glean of this nonsense: high school girl Hanabi Natsuno moves back to her home town after a few years absence and moves into her new dormitory. The accommodation appears to be packed with over-sexed girls all of whom seem to prefer the company of girls. One is her former childhood friend Konomi Fujiwara whom she has not seen in years. There is another girl there who has amorous attentions upon the new arrival and endlessly tries to seduce her. Add to this the presence of at least four other girls all of whom appear to fancy the pants off Natsuno and each other. The three-minute shows are all over in a whirl leaving the audience completely baffled as to any subtlety. It is not subtle. It is not anything. Scratched heads all round. Maybe reading the yuri manga series by Merryhachi would explain a few things. Or maybe there really is no story. Who cares? Occasionally fun and not truly appalling. But this is not saying much.

Gross. I should've known but I watched it anyway. The only ppl who would enjoy this r lolicons. Stop pls. I was excited to watch a gl harem but i guess the target audience is gross old men. Would give a 0 if possible.