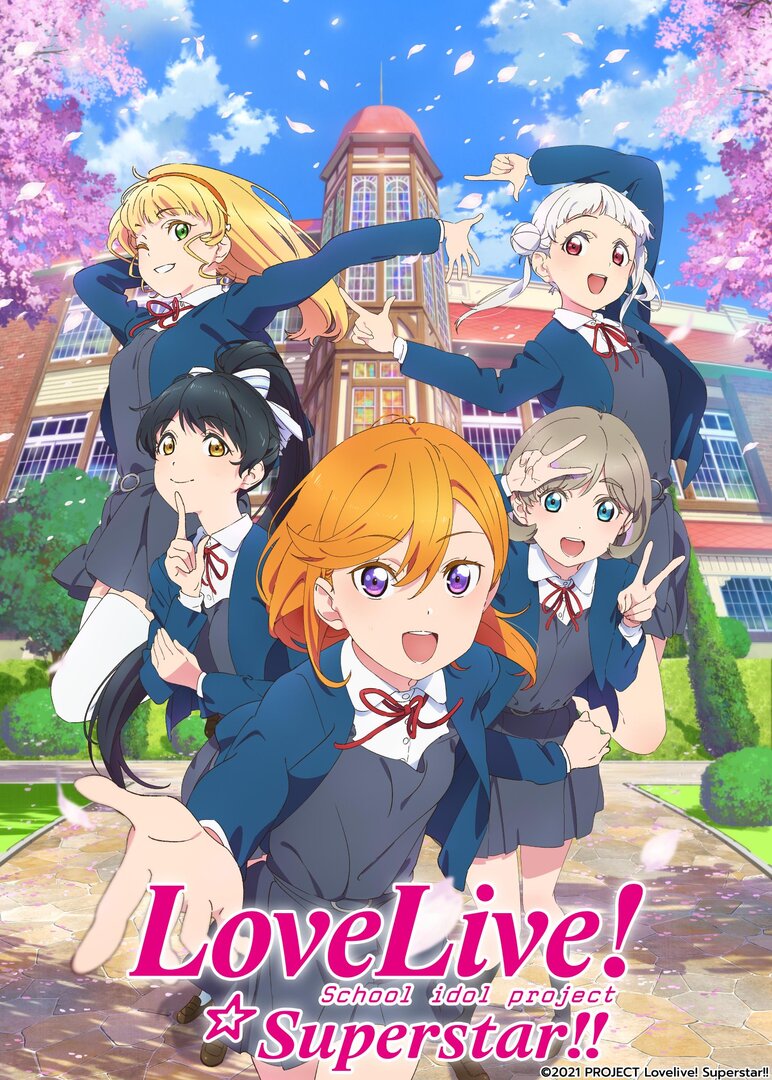 This is it. We have perfected Love live. Dropped the Quantity and added further advancements to Quality in Waifus. The Music, the characters, the Animation it's just Splendid. You can tell the improvements just by watching the first Episode.  Perfection.

Having seen all the previous versions of Love LIve! (SIP, Sunshine!!,Nijigasaki), it was nice to see that the fourth offering Superstar!! had some pleasing aspects, along with a touch of 'what? this again!'  Formula-series have the bad habit of repeating,  but Superstar!! made efforts to break old habits.

First, the pros.  Superstar!! gives us a smaller ensemble called Liella.  Five girls!  I  could memorize names quicker than those nine clones of the nine originals.  Real characters without the quaint characteristics as verbal tics, strange chunibyos, or a pattern of meeting three-second years first, join them up with three-first years before finding three third years.  While it may yet come down to featuring Liella vs. one other school idol group, we know of eight groups in the regional competition by season’s end.  A second season could do well to develop more than the old-formula ‘main team vs. nemesis.’

But we do have a few cons.  Some are not that big at all, just little glimpses of what was done before, as the sudden close-up of a girl in the opening theme (I mean you Chisato!) though she was not as 'in your face’ as Ruby or You.   But the big heartbreak was ... the high school is in danger of closing.  Again?  µ’s saved theirs.  Aquors lost theirs.  What?  Is Superstar!! the rubber match?  Do a little brainstorming for new premises, as ...

The all-girls academy is in danger of being forced to allow boys (gasp! a horror scenario for shojo).  Only the school idol group can dance and sing their way into keeping them out (or letting them in, if the producers are so minded).

An extremely arrogant school idol group from another country (i.e., let's say ... Russia) has toured Japan and have been humiliating established groups (we can have  µ’s, Aquors, and the NHSIC come out of retirement only to fail).  Only the new school idol group can draw deep down inside to thwart the hostile школьные идолы.

Aliens from outer space .... ok let's drop this one.

Anything ... just don't threaten those high schools with closures.

Strong characters make Superstar!! supreme in the school idol universe ... for there are only five to develop.  Enthusiastic Keke.  Talented Chisato.  Matronly Ren.  Starstruck Sumire (closest thing to Nico Nico neeee).  But the best is Kanon, a talented singer battling a bout of stage fright.  That epic encounter of high school Kanon with the elementary school Kanon on the very stage where Kanon failed ... inspired writing!

And the music just gets better.  Each girl is featured as Lielle forms with the friendship of Kanon and Keke, who learn to put up with Sumire, and are blessed with Chisato's training in choreography, leading up to the incredible backstory behind Ren's resistance to school idols.  As a group, the animation involves intricate movement between girls as in SIP and Sunshine!!

At end, I liked the new elements of the plot as reduced size of group meeting more of possible competition.  Not a clean break from formula, but there is this thing called the second season.  Here we might see all the new twists on the old schema.  Looking forward to it.

As Love Live has come a long way from the original project, there are certainly outstanding points to note about Love Live! Superstar!! Many may argue that Sunshine was a copy of the original School Idol Project but I strongly believe that none can say the same for Superstar one. The five-member approach allowed for a deeper and intimate view of the girls, giving more breathing room and character development as opposed to nine members. I feel as though there were stronger bonds between each of the girls with a smaller cast, in previous Love Lives it felt as though some characters didn't get to spend as much time with others and their bonds didn't feel as strong (i.e. Kotori & Nozomi, Ruby & Kanan, Rina & Karin). I also felt as though the way they handled the main girl, Kanon, with a far more appealing and unique take than with Chika and Honoka. Both were extremely energetic and ready to perform as idols, whilst Kanon did not actually want to sing and had stage fright which I feel was a very important factor of this series. Love Live! Superstar!! has to be the most promising of all Love Lives so far and hopefully will leave as good as a lasting impression as Muse did.

Story: Similarly to its preceding animes, Superstar imitates the general formula of 1.) finding out the school is in danger of closing, 2.) forming an idol group to save the school through popularity and support, 3.) form bonds with the members, 4.) The student council president doesn't approve of a school idol club but ends up joining in the end, 5.) not be able to perform/not advance in the first Love Live competition and 6.) bring home the gold in season 2. The one thing I was disappointed with a bit was that the story of Superstar was kind of predictable as it was indeed a tad bit similar to SIP and Sunshine. However, there are some elements that made it feel fresh and not as repetitive. The most compelling element that took me for a spin was the themes of death and loss, something I never thought Sunrise would do in a Love Live project but proved a great emotional part in the story, as well as valid reasoning as to why Ren disliked the idea of a club and I feel, a much more compelling reason compared to other presidents in previous installments. I also enjoyed the setting of the show in such a bustling but beautiful place as well, Harajuku if I recall correctly, was where it was supposed to be set. I also really like the fact that you don't have to watch the previous Love Lives to watch Superstar. It's a stand-alone story with not a single mention of Muse, Aqours, or Nijigasaki.

Animation: Love Live's arguably biggest problem in the original series was the CGI dance sequences. It turned off a lot of my friends that I tried to get to watch and have simply never returned to. However, It is certain to say that Superstar's CGI is at peak quality. The non-CGI sequences were exceptionally done as well, I recall times where I thought "Damn so and so looked so pretty in that scene". One song, Nonfiction!! Did an excellent job of making the girls seem more sexy and mature, matching the theme and feel of the song while being animated perfectly. There were obviously some low budget scenes that do happen in some animes, but I'm really impressed with the quality of the animation of the characters and landscape

Sound: The entire main cast of Liella! have outstanding voices. from Liyuu to Aoyama Nagisa, all members bring strong and excellent pieces to the harmonization and group sound of Liella! They all are very strong singers and sound wonderful in every song that was present in the anime. They all have distinguishable voices that you can pick out who of the five is singing in practically every song. Speaking of songs, Love Live! composers have done it again and produced top-quality songs to accompany the journey of the girls. As for other sound elements such as BG music and general noises that imitate the setting, I feel it was done in an exceptional matter as well.

Characters: Love Live! has to make every girl unique and with 30+ main girls from all series combined, the writers will obviously run into a block. I am, however, impressed with the 5 girls they were able to produce for this series. Kanon, Keke, Chisato, Ren, and Sumire are all indeed unique from the already preexisting cast of Love Live! I also feel as though these girls are fresh characters, not comparable to any previous idol. Kanon, a wonderful singer but the first MC who actually has stage fright, Keke, the foreigner who came from Shanghai just to become an idol, Chisato, a prodigy dancer, Ren, a rich and mature Student Council President who is trying to uphold the school, and Sumire, a commercial actor who just wants to make it big. As I mentioned earlier with the smaller cast, a lot of stronger bonds were definitely present with the five. Another new relationship I've never seen before that this Love Live brought was with Keke and Sumire, a sort of rivalry and air of meanness to one another but cares for each other at heart. I felt as though all five got the perfect amount of screen time and allowed us the viewers to truly enjoy seeing them from their beginnings to the Love Live competition.

I may have compared Superstar too much to its predecessors but I do feel it's important to address its comparison to the other projects. I truly enjoyed watching Superstar and getting to know it's cast, can't wait for season 2 :)