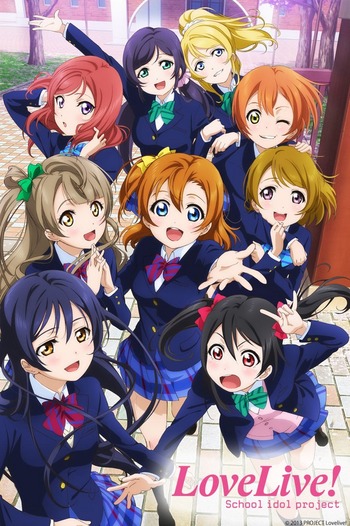 I really can't recommend Love Live enough! It's got a compelling, pretty realistic story with fun characters. I enjoyed watching the whole ensemble of characters get together and build their numbers throught the first few episodes. There's 9 main characters and everyone has different personalities and struggles and it's great to watch how all the characters interact. I really enjoy the actual performance scenes, there's enough build up to each performance that it feels exciting. One of my few complaints is, a few characters really just don't get as much screen time. In particular I felt that Rin, Hanayo and Nozomi were less developed, we don't get to know enough about them as individuals and I liked their characters so I just wanted to see more of them. Definitely has a slower pace, sometimes you'll watch an episode and not much will happen story-wise but it's still fun to watch to see all of the characters along with some genuinely touching moments and some fun comedic moments as well. I liked the directions that the story took, all of the conflict seemed realistic and because of that it was even more engagin to watch. Overall, I highly recommend this, it's a great watch for anyone but especially someone who likes school idols! Oh and also, both mobile games based on Love Live are great.

Love Live is an anime that took me by storm. I originally watched Locodols, which is very much like this anime. If anyone hasn't seen Locodols then I reccomend it before this anime for a variety of reasons. It's lower budget and is a whole lot slower pace then this anime, and also is less predictable. So if anyone enjoyed Locodols then Love Live should be an epic of all proportions.

Story
The story calls for an antagonist just to call "Plot Development." This is the greatest flaw and you can see a rival group coming a mile away.

Characters.
Characters while they do have cliche's there are overllaping character arcs which is unusual. What separates them is that the story is much better when there are two characters who are similar. They aren't the same because say A is obsessed with Idol groups and B is super shy but also obsessed. Each group has their own seniors like in other clubs, IE there's juniors, sophmores, and freshmen each of 3. With such a large cast there are only a few minor flaws with the cliche's. Yet the characters are the driving portion of the story. I also envisioned having some say boys, but then again boys and romance would hinder the story. It would create needless drama which I think the authors didn't add them on this basis. For the actors they seem to have chosen the voice actress Alladin for Nekko. What's really neat is that they are using upcoming future voice actors for all the females.

The animation in HD is crisps. However there are flaws in the fact that they avoid cars, and any 3D production scenes like riding bikes etc, due to them dancing in 3D. In one episode the production.

I always found myself inspired.

Love Live is a must watch. There's always some appeal to someone. On top it's one of those animes that for the first few epsidoes (Minus one character) is family friendly.

This was a very good anime series! It had it's ups and downs.. but well I won't spoil the ending.

Story- I gave the story a 10 because this was the first time I've seen a story like this and for me, it was original. But also it's like it was made by pediaphiles or something because they had a lodd of leg shots and butt shots and they have ridciculously short skirts on( even though this is most animes)

Animation- I  gave the animation a 10 because I love animation like this. The colors were bright and lively and even though some of the dancing scenes were in CG animation, it didn't bother me at all.

Sound- I gave the sound a 10 because it was very good. Almost all idol animes have great soundtracks because that is the main focus of the story so it the producers give it more thought.

Characters- I gave the characters a 10 because the charcters in the school idol group were very diverse. There was tsundere, rich, and shy characters.

Overall- Overall, I give this anime a 10 out of 10! I enjoyed it very much and there is also a second season to look forward too, that I won't watch yet. If you love idol anime, this is a must see and it's a well known idol series.

I have to admit that, after dropping it for several months, I came back to Love Live!: School Idol Project not because I was in love with the show, but because I'm mildly addicted to the cell phone game. Upon my first viewing, I thought that Love Live! was a pleasant show with nice character designs for fairly unmemorable girls, as well as some very cheerful and fun pop music floating around in the background. It was the music that drew me to the game the minute I got a cell phone good enough to play it, and the game that dragged me back into the anime.

Now that I've watched all of Love Live's first season, I do like it better than I thought I would. The characters are very likable, there are some plot developments that I genuinely didn't expect, and nothing about the show really seems to be forced. It's believable that these girls would be friends, the way their idol singing quest plays out makes sense (even though I would like to know the background of this world where school based idol singing groups have become so important to popular culture), and when one of the girls ends up being unexpectedly important to the plot, it makes sense. It's a little slow paced, but since this isn't a show I was watching for the action, that wasn't a bother.

There were a couple of things about this show that I found to be very bizarre. One, which is rather specific, is the episode where everyone finds out that one of the girls has a part time job and, despite the fact that this is a bit of an unusual job everywhere except for in anime, none of her friends so much as flinch. Their relationships seem fairly realistic both before and after this point, so I was surprised that none of the girls so much as ask her what this occupation is like, or how the customers treat her in the face of this revelation. It's not a big problem, but it's conspicuously odd in context.

The other issue I have with this anime is the god-awful horrible CG dancing animation. I know, it saves on the animation budget, and other idol anime do it, too, but it still looks weird and bad. The funky CG heads and noodle limbs are quite distracting, as is the fact that their outfits and hair actually seem to be better animated in the normal scenes than the dance scenes. I don't begrudge anyone else liking this style, but it's certainly not my thing.

Love Live!: School Idol Project isn't my favorite anime by any stretch, but it's so pleasant that it's difficult for me not to recommend it to people looking for a low drama anime with some exemplary fluffy pop music. Though I don't know that I'll rush to watch it, I look forward to seeing season two.

Not a fan of idol animes, but this anime had good parts and interesting stuff, so it was yet worth a watch, but the reason why I gave it a low rating is because it's not my type, so I dropped the second season for some reason.