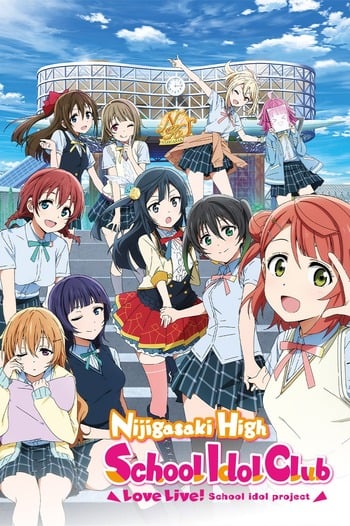 Love Live: Nijigasaki School Idol Club (hopefully season 1) has ended. What did I think of the season?

Very, very good. The characters are great and the interactions between them are fantastic. The art looks a bit off when I first started to watch it (mainly because I went into it with the mindset of the old art animation from Project and Sunshine) but I ended up getting used to it quite quickly.

Can you start with Nijigasaki?

Honestly, I can go ahead and say that... yes. If it is your first time actually watching Love Live, you can start here if you want to. The only time it ever references Project and Sunshine is when Setsuna in episode 3 mentions the Love Live tournament but that is the only time it is ever referenced.

Are the songs any good?

The main criticism I had about Project when I first watched it was the fact that about 30-40% of the songs (IN MY OPINION) were quite forgettable. Sunshine fixed this adding a lot more songs that I can remember off the top of my head. There were a few duds, but it was better then Project in that regard.

I can say that every single song in Nijigasaki is memorable in a certain way because the solo songs that each of the characters perform are related to their personalities which makes it 10x more rememberable in my opinion.

Do I you need to play the game (SIF All Stars) to understand anything?

No. While it enhances the experience and there are some references in the songs PV’s that directly reference costumes from All Stars, you are not required to play All Stars to get the full experience.

Is it (in my opinion) better than Sunshine (my favourite series of Love Live)?

Overall, what do I rate it?

Nijigasaki is a fun time to be had that people new to the franchise can start if they want to. While the story is a bit slow and doesn’t start so seriously pick up till about episode 4, it is still a fantastic story. The backstories for every character are very in depth and meaningful that during Rina’s (episode 6), I actually ended up crying. I understood the troubles the characters where going though and really wanted to see how they over came those struggles and grew as a character.

As I said, some parts of the story are slow, but when the story gets good, it really gets good and I can commend Nijigasaki to that. The art is absolutely fantastic as well and blends the 2D and 3D animation of the PV’s extremely well, it just takes time getting used to the 2D art style if you have watched Project and Sunshine. I personally 100% recommended this

I don't even remember there being an actual story to the show if I'm honest they repeated having someone being against the club joining it just like in School Idol Project and Sunshine which do it a lot better the whole solo idea was poorly executed and made people who were meant to be main characters feel like side characters the solo idol idea would of worked a lot better if it was used in Superstar instead of this show because there was just too many people in it they had the starting up the club after it had disbaneded just like in Sunshine which again did it alot better than this show and it just felt like nothing happened throughout the whole show.

The animation is your average funimation show it's not bad but it's nothing to write home about it's average slice of life animation and the CGI is just meh and is better than older series' CGI for obvious reasons.

The songs I skipped most of them because I wanted the episode to end quicker and it was average voice acting nothing bad but nothing above what you would expect.

Honestly the characters were either very forgetable or just boring there is only one person in the show who I genuinly liked which was Kasumin the other characters didn't have enough screentime or just didn't feel like main character material and just felt like side charcters there is also another character who stood out to me which was Ayumu who I absolutely despised she was by far the worst character and probably held the show back from being actually enjoyable and it puts me in pain to see her in the show and yuu the other sort of actual main charcter was just boring.

It was by far the worst series of love live I hope that the second season is much better than this one and thankfully they learned from the mistakes and didn't do solo idols in superstar.

This is better than sunshine in all aspects. The evolution of love live i'd say has started

When I began viewing Nijigasaki High School Idol Club, Love Live!'s third adventure in the world of singing/dancing girls, I had misgivings whether it would just ape the previous versions, my main gripe of the franchise.  Sunshine! was patterned too closely to SIP that it was nothing more than an exercise in déjà vu all over again.  I set out three rules which I felt would be good markers whether I could enjoy Nijigasaki:

1) No stock characters, girls looking sooo much like that other girl.

2) No repeated premise.  No all-girl academies are to be harmed in the production.

3) Personalities before performance.  I got to have to feel I'm getting to meet somebody new and different.

Thankfully, Nijigasaki powered through all these demanding provisions.  There is something unique about the third production in the Love Live! series.   But, not all unique is equally good.  Nijigasaki does break the mold, and that is good for starters.

The characters are memorable.  And they need not have eccentric qualities that jump at you, vocal tics, or other over the wall traits, though you will find some pleasant ones in Nijigasaki.  Ai Miyashita is the sweet girl who supports those fearful and uncertain types in the group; having a sweet tooth helps.  Kasumi Nakasu is a pint-sized megalomaniac who feels it is up to her to save the day and shine on stage.  Kanata Konoe is a narcoleptic girl who can take a snooze anywhere, and this scares her little sister into having her own school idol dreams cut short.  Rina Tennoji is a girl who cannot express emotions beyond what is on her somber face, but her techno skills allow her to perform behind a mecha-mask which flashes the cutest smiles.  Setsuna Yuki leads a double life, one a school council president who cracks down on school idol groups, one the premier school idol in the club (rather a Jekyll and Hyde type)  Karin Asaka already has the stage presence as a model, but she must push hard to become as adept on the stage as an idol.  Emma Verde is a Swiss transfer student who brings her own sense of optimism to the group.  Quick time out on characters, while I move to Nijigasaki's spin on main characters.

The first two Love Live! series involved the trio of second-years who are instrumental in creating the idol group.  The formula was: two established friends find the new transfer student and these three charge forward to find the first-years, then the third-years.  3+3+3=9.  Nijigasaki tosses that.  Two girls are the linchpin to the storyline, and they first meet each other in episode one.  Ayumu Uehara is the klutzy girl who has the zeal to perform on stage; Yu Takasaki is the girl who will support her dream (green-tinged pigtail? quaint character design).  As the episodes proceed, you sense a touch of yuri to this relationship, but nothing serious develops other than a desire to be at each other's side in the challenge of being the new school idol group in the world of school idols.

There are uniques that are not as cool.  The mission of Nijigasaki School Idol Club (the only thing in the series that was in danger of folding) was to give its members the experience of singing on stage ... as solo idols.  This helped give us great back stories for all the girls, but it lost on the feel for choreography.  Worse, when the final episode gave this team a chance to perform together, the animation method was still shots of the performance.  No sweeping position changes as seen in SIP and Sunshine!  Plus, the added mystery.  The Nijigasaki school idol group that performed for the School Idol Festival then were nine in number, but in the opening theme sequence, you watch ten girls dance on stage.  You might ask what is up with Yu, the supposed hold out?  A second season will hold the answer, I suppose.

The music was tailored for each girl in the group, and this could reflect the personality.  Ayumu's song of aspirations was more memorable than Kanata's brisk number which I could have slept through.  Kasumi's reflected her lively, though a touch conceited nature.  Rina's was upstaged by her mask and video graphics.  The animation was less developed than SIP and Sunshine!  The drawings were simpler, and the routines of the solo idols were less integrated, almost placid in comparison with the first two versions.

But the best thing about Nijigasaki is its difference.  Its look and feel were nothing like the first two editions of the Love Live! franchise, and the further development of this school idol group and the challenges beyond the School Idol Festival hold great promise.  It will be like nothing I've seen before, I'm sure.