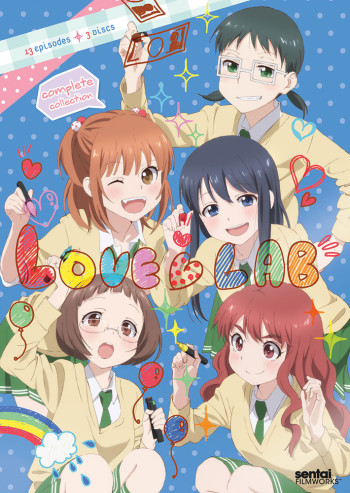 Love Lab is a pretty typical comedy show. It is founded on the premise of a girl's school who's (as usual) student population consits strictly of girls who are not allowed to date guys or have romantic relationships becuase that's how healthy servile-, I mean women, are indoctrinat-, I mean bre-, I mean reared.

We are immediately introduced to the protagonist, an unlady-like girl named, Riko Kurahashi,  who doesn't act prim and proper much to the delight of the school's lesbian population, because she played soccer as a child and got on well with the boys of her previous school because men and women can't be friends so obviously any girl who gets along with guys has to be a dude and is not allowed to have feminine qualities.

Sadly, no the plot isn't not going to go in any good direction with that last line. Mika simply wants Riko's help in figuring out how to get a boyfriend (becuase women thing about nothing else in the shallow world of Japanese soceity) immediately taking all of Riko's claims at face value. So is the set up for the entire plot of the show, the girls sit around talking about ways to get guys and churning out barely humourus comedy because they realize that their lives revolve around men and the comedy staves off the bleakness that is the existance of Japanese baby factories and the slow decent into suicidal madness.

Okay, okay, all politics and social commentary aside, Love Lab isn't particularly bad. The animation is good, the character designs are a bit boring and uninspired but they're not overly flashy and excessive (such as in visual novels), the characters themselves are well written, and they interact well. The comedy is mostly passable and relies primarily on the over-reactions of Mika as she tries to figure out ways to overcome her sheltered upbringing. Once the entire student council is assembled they all decide to join in the activity with all of the advice given by Riko being predicated on the lie that she is "expierienced in love".

Later they decide to start giving advice despite romance being banned at the school and after an initial promising foray into this plot device where the student council manages to deploy their clandestine information to the student body while avoiding the wrath of the teachers; the story ultimately goes nowhere as we do not get to see the outcome of their suggestions and the entire plot thread ultimately ends up getting dropped with nothing really happening and turns into your basic boring bland buddy buddy comedy in the end.

Ultimately it is better than most of the crap you're going to end up watching and while its' subect matter is pretty shallow, it's put together well and never really ends up being boring.

Love Lab is pretty average in terms of characters and production values, but it is quite a cute show. This will just be a brief review.

Brief Summary: At an all girls' school, Maki, the student council president, is secretly interested in how to attract a boyfriend. Riko discovers this secret, and is forced to join the student council because of a misunderstanding: Maki thinks Riko is a "love expert."

Animation, Sound, Characters: All of these are pretty average, bordering on boring. The characters aren't too bad, but they're not super nuanced either.

Overall: If you like cute stories about friendship, this one is pretty damn good, despite its plain packaging. Cutely comedic, fairly innocent, and definitely dramatic.

Very upbeat and silly in an entertaining way

I have given love lab four stars which is probably more than it really deserves given its product quality. It was just so entertaining, light hearted and uplifting that I had to award it four.

It is about the daily school lives of five girls of the student council. Where they conduct illicit research into attracting boys. Lots of mistakes are made and silly antics occur.

The emphasis shifts between the five girls from episode to episode. The only continuous plot point is Riko's lie. Riko and Maki are the two principle characters within this story. Sayo is an interesting and more believable character who adds some intelligent gravity to counter balance its absence in the others. The remaining two are just there to make up the numbers. All the characters are likable in their own way.

The artwork and music is good and voice acting is very good, consistently creating a upbeat funny mood throughout.

Love Lab is one of those many (and when I say many I really mean millions) cutesy girl anime that revolve around a school setting. Furthermore it takes place at an all girl’s high school where everyone is petrified to even be near a man thus bringing us to Love Lab quirky but somewhat plausible premise. It is a flawed show...but I still love it.

I found the premise of the show extremely superficial since I find it hardly believable that these girls would have almost no experience even being around boys. Basically these girls start up a “Love Lab” as a part of the student council. They would take questions on love (which they have no clue about) from students that asked and somehow answer them. This however was easy to look past (for me at least) since the characters were really the stars of the show. You can defenently draw comparisons to K-On in this setting; you didn’t watch K-On for the music aspect of the show but rather the character interactions. The same applies here as if you are seriously watching this show for the plot then you have very low standards.

This just may be my weirdness but I swear at one point in the show the animation quality dropped down. I feel as if things like how the character’s hair flowed or the clarity of background objects just suddenly lost effort. Regardless the show sports some okish visuals. Each character is very appealing to look at (eyes yum) but other than that I feel as if everything else was just passable.

Nothing really stood out here. Some ok tunes but I didn’t find anything over the top. Didn’t like the OP or ending stuff either.

I LOVED all the characters except the annoying vice president Maki. Other than her, all the other characters really flowed well with each other and brought some sort of enjoyment to what was going on. My personal favorite was Enomoto since she eventually starts to open up to the club and provide some helpfulness.

Overall the show was pretty bland but I did end up enjoying it. Loved the character interactions and there were some moments of awesomeness on the animation front (though VERY limited). I would recommend this anime as one of those rainy day type stuff you watch when there is literally nothing left.

Let's give it up for the shortest review ever!!!Yeah i can feel the heat..So it's a cutesy anime,basically a story just to be on the safe side,quite a lot of humorous events and there u have it..An anime about highschool girls learning through research about love...GET DRUNK for fuck's sake and learn properly,will ya?