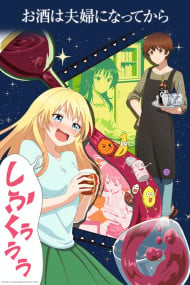 If you want to learn how to make a few mixed drinks, or just want to see a young married couple act a little cute for a few minutes at a time, this would be a good anime for you.  I usually wouldn't write a review this early in the season, nor would I write one for an anime that I dropped after three episodes.  However, this show's pretty straightforward, and is highly unlikely to become anything else over the course of the season. Story 2/10 This anime is episodic, a few minutes a piece, and with no "story" beyond a simple plotline.  The young, cute wife works for a corporation, and appears to be some sort of middle manager.  She's well like by her coworkers, but very serious.  Unbeknowst to her coworkers, she loves to unwind with a drink, but doesn't like to drink in public because she's embarassed by how she acts.  In fact, she seems to be incapable of relaxing without a little alcohol in her system.  Once she's got a little buzz going, her character switches into the cutesy, clingy type.  Ever the diligent enabler, her young, cute husband appears to be a happy homemaker who enjoys mixing posh cocktails for his spouse, and teaching her/us what the ingredients are after she's raved about how good it tastes.  That's all there is to it.  Every episode follows the same pattern.  It's a bit repetative. Animation 8/10 Being only a few minutes per episode, they had plenty of time to work on the animation and character design.  As a result, they look quite good.  There's nothing new or groundbreaking in the style.  It's all very typical and forgetable, but still pretty well executed. Sound 7/10 The VA's don't have a lot to work with in this script, but they still executed it pretty well.  The wife is only mildly annoying when she's tipsy.  As for the music and sound design, nothing really sticks out. Characters 4/10 I hit upon the basics already, so I won't repeat myself here.  This isn't the sort of anime that has character development, but you do get a few comments about how they met.  Whether they go into that more later or not, I don't know, but I also don't really care.  The characters are rather one note, and I wasn't all that interested in getting to know more about them. Overall 4/10 This anime was probably made to share the writer's love of mixed drinks, which is fine.  I just don't think it did a great job of selling those drinks, or the characters, or the anime itself.  I like making interesting gin & tonics or other cocktails from time to time, but I'd honestly rather learn how to make them by seeing an ingredient list, or watching them actually being made than through a slice-of-life setup, followed by a cartoon husband telling me what's in a drink.  It's not bad, or poorly executed, or unwatchable.  It's just not very interesting.  At least not in my opinion.  If you just want a few minutes of cutesy newlywed interactions, or to see someone half slur how good some sake tastes, you may think differently.  At only a few minutes a pop, it wouldn't kill you to ignore my review and check it out yourself.

Creators in Pack’s 2017 short-episode feel-good-romcom finds itself in a marriage between wondrous anime trope and something completely novel. The original was a web manga series written and illustrated by Crystal na Yōsuke. Its premise is pretty simple: smart office lady Chisato Mizusawa is married to adorable house-husband Sora Mizusawa who prepares her a good meal and a cocktail every night when she returns from work. Her secret is that even the slightest hint of alcohol turns her from serious professional office-team-leader into a sill, girly-flirty, cute kid. She is adorable! It is not an image that she wishes for her colleagues to see. Each episode only lasts a few minutes each and is usually split equally between Chi-chan’s professional office life and her home-life with Sora. Each comes complete with its own cocktail recipe so you can play along at home. Towards the end of its single season the story telling turns into a recollection of how the couple met. He was working temporarily as a bar man and prepared her her first alcoholic drink. The whole package presents nothing emotionally challenging for its audience. It is the anime equivalent of a timeline cleanser. Each episode is as sweet and potent as a good cocktail: all so extremely “nice” without getting too sappy or sickly. It is pitched just right. You can blast through the whole thing pretty quickly and feel good at the end of it. No hangover. Guaranteed.

This wasn't too bad at teaching you how to mix drinks, which isn't anything to praise it for as that was the whole point of the anime.If you want to waste half an hour or add an anime to your list, this is one to breeze through; plus you get to see the alcoholic wife orgasm each time she takes a sip from her glass. 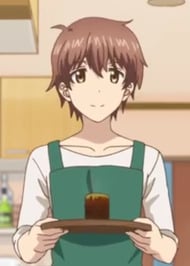 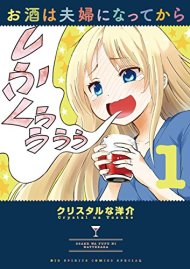