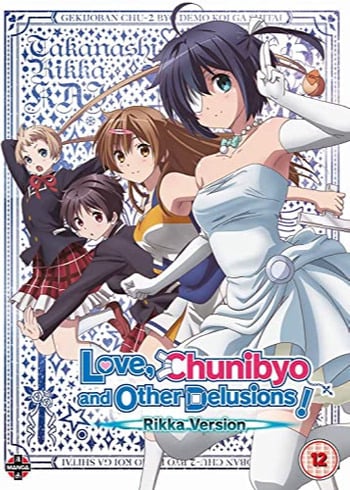 There's really no need to watch this if you've seen the first series recently, as for the bulk of the film, its a simple recap. There's a bit of new footage in the first 10mins, which is mostly dream-sequence anyway, and another 10mins or so new footage at the end of it. which does have a lead-in for the second series.

I would reccomend you watch this movie if it's been a while since you saw the first series, as the recap does serve well to jog the memory of the events which unfolded, and is much shorter than sitting through the entire first series again (like I did)

Personally, I would have liked a self-contained new story like a lot of films do, as these recap ones aren't really my thing. Other than the 20 or so mins I already covered, the bulk of this is hashed together clips, a truncated version, supposedly from Rikka's viewpoint, with the (rare) commentary as she she tells her story to Deko and the sleeping princess.

However, the flashback does deviate from this conviction at points, such as the highlight of Yuuta's cheerleader dream come Deko wake up call - something which Rikka would never have had privy to.

Anyway, despite it's small flaws, and the bulk of re-used material, the additional 20mins are certainly worth the watch - the first part being fun, the second part giving reference to the next season content.

Can i watch this movie on here? if i can someone plz tell me how

ok how do i watch stuff pls help me

Watch until the recap starts, then skip to 01:19:20 and watch until the end for the new footage. Unless of course you need the recap, but if you recently watched Season 1 you won't be missing anything.

It says it's from Rikka's perspective, so I was hoping we'd get some new footage in the middle dedicated to that, but there's nothing.

The only interesting thing about this movie is the last few minutes where Yuuta offers to have a talk with Rikka's grandfather about her living situation but other than that, the movie is a really bad abbreviated version of the season. Nothing flows, scenes are cut really short and certain scenes are out of order.