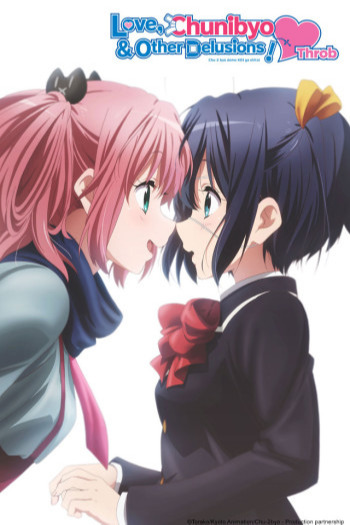 i just hated what was going on, it displayed on of the most worst things girls do that boys hate in a relationship. And i just got really pissed at how all the girls acted.

The animation and sound was as always good to see and hear, so no conplaints here.

The second season OVA, Heart Throb: The Rikka Wars, is definitely the better of the two Chunibyou, Love & Other Delusion franchise pieces.  Placed in the second year of Yuta and Rikka's high school years, the progress of love ekes along.  While committed to each other (as everyone else seems to believe, you know ... girlfriend/boyfriend ... whatever), the pair has their first crisis in the relationship.  Makoto slipped Yuta a flash-drive with pictures of the idol Yuta was enchanted with in middle school.  Rikka has seen this transaction and asks Yuta about its contents.  Yuta comes clean and offers to return the flash-drive to Makoto.  But he sticks Yuta with the stash of pics and Yuta does take time to view them.  Rikka, jealous over something, ransacks Yuta's bedroom (while Yuta was still sleeping ... awesome ninja skills) and finds, then destroys the drive in a fit of anger.

Here is the crisis, both were wrong, Yuta for viewing the downloaded  contents, Rikka for not trusting Yuta and invading his space.  How to resolve the tiff?

Here is the comedy of the storyline.  Rikka would clash in chunibyou battle with the Dark Flame Master.  Yuta will not, thinking the delusional approach ridiculous.  Don't despair.  Help is of the way from love-doctor Shinka and senpai Kumin.  Rikka's older sister Touka looms in threateningly.  Italy is on the horizon, but for whom?  Yuta's little sister Kuzuha remains supportive.  Sanae would happily help Rikka smash Yuta to bits.  Okay, that last one was not a good example.  But in the end, the power of double apology and hand-holding saves the day.

Granted, the epic animation spots are downplayed in the serious matter of boy-girl relationships.  But Yuta and Rikka endure even in the tough times.  This fits in well with the antics Rikka and Yuta will have in their 2018 movie.  Elope much?