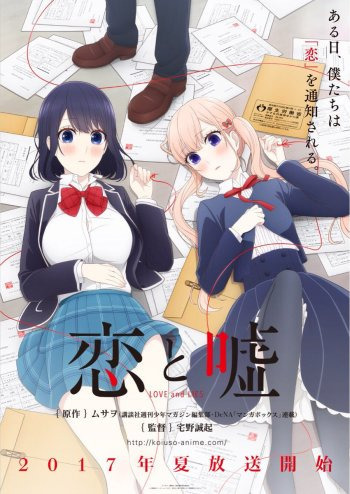 That was my reaction as soon as I finished the last episode. Up to half-way I was (hopefully but, alas, wrongly) under the impression there was some kind of intricate plot still to be developed, so I was trying to guess what was REALLY going on and at the same time trying to figure out what were all the LIES the title of the anime unmistakably promised. Then at a certain point I started having the feeling that, wait a second, maybe there was REALLY nothing to it after all and there were NO lies worth mentioning.

Don't get me wrong, there is a plot that gets developed. So it's not complete rubbish. But really, it's based on a premise that I find insulting to my intelligence (which should have been pretty clear just by reading the synopsis, so: my bad) and the ending is just as much an insult to the viewers' intelligence as the insane premise. My suggestion is to just steer clear of this.

The characters are not only clichèd, their reactions are inconsistent and illogical. The male is the typical lead everyone falls - incomprehensibly - in love with, wishy washy and indecisive, with no back-bone and the emotional intelligence of a four-year-old. One girl is a tsundere and the other the sparkly eyed childhood love. The utter senselessness of their interactions made me blush and cringe countless times.

The pacing is bad, after the first couple of episodes it gets repetitive, hence boring and slow.

Love and Lies despite its not well thought-out premise started out OK. It was an easy watch, but half way thru everything started to go downhill.

The main character is an avarage indecisive teenager with dull personality. He's neither good looking, cute, funny nor cool in any way, yet everybody seems to be in love with him - his crush, his assigned wife and a male friend as well. The two girls instead of becoming rivals become best friends and seem to support each other. They never get angry at the lame male lead for being an ass too even though they secrety want him all to themselves. So that is the so-called "lie" which honestly just makes no sense to me. It is a love triangle where everybody's love is mutual (except for our poor gay guy) and so the anime ends on this note. Weak, weak, weak... there also were some unnecessary mysteries thrown in, one regarding the relationship between Misaki and Nisaka and one about Misaki herself why she needed to be "protected" or something along those lines. Unfortunately nobody bothered to elaborate on that. Maybe season 2 is coming, if not then there was no point touching the subject.

Probably the best romance anime in my opinionヽ(･ω･ゞ)

Using vivid colours throughout the anime makes your heart claim and watch the anime without distraction, (eg like ur phone) same goes to the characters, different variety of characters are introduced and own with unique characteristics, (but the main protagonist is a bit dull, no key element features like any other anime protagonist does eg big spiky hair with bright red) what makes this anime the best romance anime is that the story and the characters mix really well just like butter on toast. ^o^

This anime definitely disappointed me. At first, I did like the story, I thought it was a very clever idea and would make for a great romance anime, but as I watched it more, I realized that it wasn't as great of an anime as I originally thought it to be.

As I watched the first few episodes, the love between Yukari and Misaki seemed to be going good but as soon as Ririna came into the picture, everything just became a mess. Ririna becoming Yukari's "wife" just didn't settle well with me and the fact that she was okay with them being together ( Yukari and Misaki ) made me change my opinion about their whole relationship. I would have liked the anime to be less choppy and Yukari's character to be more decisive because as I see it, he's one of those main characters that should be left on the sidelines. This was my honest opinion and I hope it helped.

Japan's birth rates are on the decline (because underpopulation seems like a problem we're likely to have in the near future), so in order to increase it, instead of actively encouraging large families and increasing the amount of child support available like a normal government would, they set up an elaborate marriage matching scheme to partner everyone with their ideal match. I mean, the amount of work they put into it is very impressive. Totally overkill, but still impressive.

Enter boring harem mc #2348, who's only bit of personality serves to make him even more boring (he likes burial mounds. Of all the boring things, why burial mounds?) Since he was a kid, he's been stalking in love with Misaki, another boring nice main harem girl, who is obviously in love with him too (for... some reason). Seems like everything should be fine, right? Well, clearly it's not (how else would they get a 12 episode anime out of it?) Boring mc gets assigned to marry a different girl, called Ririna, who is frankly way too good for him. She's super nice, kinda akward (but in the cute way), and takes way more interest in the mc's weird obsession with burial mounds than the person who's supposedly been in love with him for years.

I mean, despite all my complaining, I did find this series fairly enjoyable. It's not great, but it's certainly watchable, and I don't hate myself for finishing it (always a good sign)

If you like harem anime, you'd definitley enjoy this. Fans of mild dystopian stuff might enjoy it, although I wouldn't go into it if that's the only element of it you like the sound of. Oh, and if you like burial mounds too - it might be nice to find a character with similar interests :D