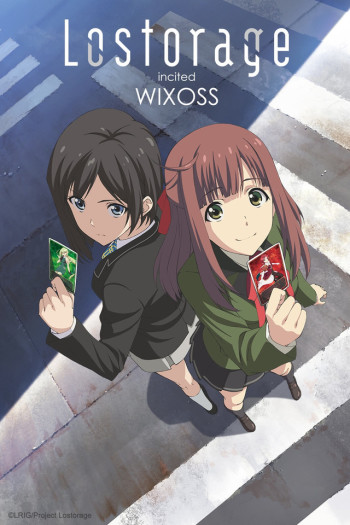 Both shows mix teenage girls, magical elements, city environments, and a dark tone. The main characters are also similar, in that they have a lot of insecurities that they need to overcome. Friendships between girls are important in both shows.

Both shows mix dark fantasy elements, emotional breakdowns, and a cast containing a lot of teenage girls. The friendships between said girls breaking down, with one side struggling to regain what has been lost between them, are important parts of both shows.

While these two shows have many things in common when it comes to tone (though Wixoss is quite the bit darker) and setting, with a big modern city and dark magical elements, the main reason for this recommendation is the duality of Izaya (Durarara) and Satomi (Wixoss). Both characters serve as driving forces from behind the shadows in their shows, and have similar motivations and personalities. I think that, if you like one show specifically for that elemenent, you'll definitely like the other.

Both are dark and violent shows with female protagonists, though Blood-C is the bloodier of the two (bad joke not intented). Both feature a theme of memories, further both have a supernatural element to them.