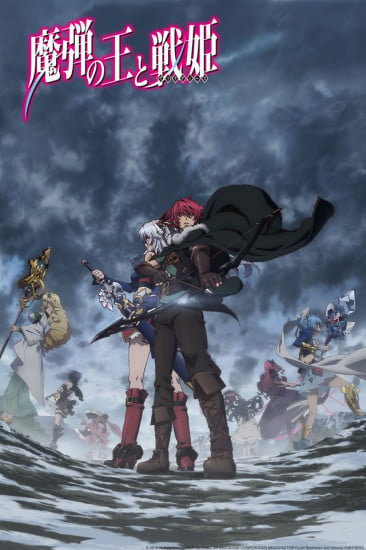 — She is a girl with a bright smile on the battlefield. With her silver hair fluttering in the air and dark eyes, the girl sprinted on the battlefield. Her name is Olivia, whose hands is stained with the blood of her enemies as she shows an innocent smile. The deep knowledge and combat techniques of the entity who called itself a Death God has been branded onto her body. On Olivia’s 15th birthday, the Death God suddenly disappeared. Olivia enlisted with the Royal Army and started fighting in the war as she searched for clues. Lunar Calendar Year 998. The Kingdom has suffered consecutive losses to the Empire aiming to conquer the entire continent. The innocent girl who lacked common sense will step into the battlefield as the “Strongest Chess Piece” of the Kingdom, and go down the path of a hero—！

Senken no Majutsushi to Yobareta Kenshi

Sword Magic, where a sword is manipulated using magic to freely fly in the air, cutting down enemies. Ardis is a user of this new magic art that has never been seen before throughout the entirety of the history of magic. As a mercenary, he undertakes various requests in return for remuneration, including subjugations, escorts and investigations. On the way home from a survey request, he protects a pair of twin girls who survived their caravan being attacked by bandits, however in this world twins are considered “abominations”. Along with the twins and a girl who accompanies him as a follower, he holds back his anger at the world which looks coldly at the twin girls due to the goddess’ intervention.

Regis Ulrich is an incapable soldier; bad at both sword and archery, who passes the time by only reading books. While transferring to a remote region post, he meets a girl who turns out be the red hair and crimson eyed princess Altina, the wielder of the Supreme Ruler's Sword. Despite being only fourteen years old, she was appointed to become the commander of the army in the remote region simply because she was the illegitimate child of the Emperor. However, she continues to hold onto her dreams of becoming Empress despite the circumstances that surrounds her. To achieve this goal, she asks Regis to become her tactician and stand alongside her against the obstacles they are sure to face.

“I’ll be waiting. Until the time when your arrows reach Shizreed.” The bow is the weapon of cowards. Having gotten used to hearing such phrases from his homeland, the girl’s words showed him the path for him to tread and he gained the things he wanted to protect. Two years later, the Kingdom of Brune entered an alliance with Zhcted and they joined forces against the Great Kingdom of Muozinel. The battle seemed to be going well until the Brune forces fell into an ambush and the war front collapsed, forcing Tigre’s troops to retreat in defeat. The one who saved him from his predicament was the Vanadis of the Kingdom of Olmutz, Ludmila. However, what awaited them were more battles. The fight against the forces of darkness in this age of legends starts now!!

Olivia is picked up by a death god, Z, deep in the forest as a child and trained by him in combat for reasons unknown. One day, Z disappears, leaving behind a letter instructing Olivia to head to the Kingdom along with a sword bearing the qualities of a death god's weapon. Thus, the girl lacking in common sense, knowledge, and normalcy sets off to join the army.

"Classes" are given at the age of 10, and the presence or absence of "skills" greatly affect life. Arel, the son of "Sword Princess" Fara and "Magic King" Leon, has been branded as "Classless"... But even without a job or skills, Arel believes he can persevere through effort.

Flaus is a savage warrior fire maiden who leaves her evil master to live a life of her own amid the demons and vampires of Lodoss. She meets Wort and Beld, who join her quest to find the legendary King Fahn. They journey to Allania where they are tested to the limit in defending Lodoss from the horned Beast and the powerful witch Mana!