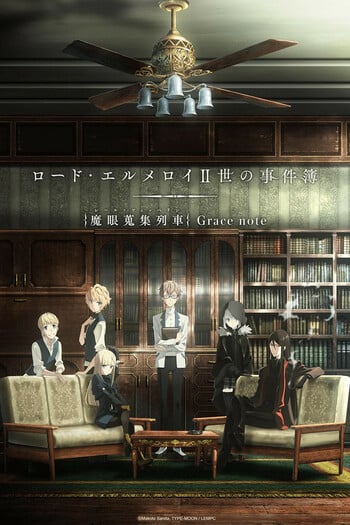 Anyone familiar with the Fate franchise knows that it has way too many spin-offs and they should stop milking it once and for all. As if getting different iterations of the same story, a cooking anime, or a magical girl show that’d make anyone look at the viewer with disgust wasn’t enough now we got a mystery show featuring Lord El-Melloi II in which he has to solve different cases and fend off any mage that might go after his own life.

The writing isn’t groundbreaking but it does the job well. It manages to let us know what the show is about and gives us some awareness about the discrepancies between the members of the mages’ association as well as their conflict against the Clock Tower.

On another note, some may find the comedy bits a bit jarring but they help to prevent the show getting too serious (and are handled well enough to not give mood whiplash).

The show also brings back some characters from previous works in the franchise. Aside of the titular character (which reminds you a bit more of his past self than the stern image he gives in the rest of the spin-offs he’s in) the show features El-Melloi II’s apprentice Flatt and the member of the Mages’ association Rocco as well as multiple nods to the events that transpired in Fate/Zero.

Some characters were more interesting than other, with Flatt winning the award for the most annoying character in the show. It could have been a bit better if he wasn’t around.

The animation is outstanding, and with it I mean it was Ufotable level of awesome. The backgrounds were stunning, the characters were really well done and the animation was very fluid. Troyca did a great work in this regard and it definitely makes me want to check out more of the anime they worked in.

The soundtrack was forgettable most of the time except for the ending song. Not only it was good but also fitted the show like a T. I hope they keep it and use it either in the opening or the ending.

All in all this was a decent prologue. It didn’t do anything out of the ordinary plot-wise but it managed to be entertaining while being a feast to the eyes. Whether the actual show will be good or a waste of time is a mystery only Lord El-Melloi II and his apprentices can resolve.

If you like anime where comedy is almost nonexistent but then pops up and confuses you, where things are pretty much always more than they appear, with curses and counter-curses, altered memories, uncertainties, flashbacks, stodgy old men, and a fairly simple plot, you could like this.

If you are into main character’s who smoke, have a habit of swearing and being condescending, and outwardly portray disdain for other living creatures but on the inside lament their own insecurities, you may like Lord El-Melloi.

As a whole this 25min prelude isn’t terrible but it also isn’t great. There really isn’t much going on and what does happen isn’t all that engaging. The comedy almost made it seem like it was going to alter the dryness [perhaps it will in the continuation] but the limited screen time in this prologue just made it awkward. On the plus side the title fully encompases the story line: there is indeed a grave keeper, a cat, and a mage - point for no false advertising.

For someone who has heard of Fate/Zero but hasn’t watched the anime or read the manga getting information from the classroom lecture was helping but then jumping to a meeting with elderly men didn’t make the introduction to the world entertaining. It just makes you hate the geezers.

The most enjoyable thing about this anime just may be Svin, a character who uses BeastMagecraft. His eagerness to avenge the slaughter of a precious feline and verbal sparring/conversations with his classmate Flatt had [and has] me waiting for his next appearance. I’ll end up watching the series just to see him.

Yeah, the anime itself might not be very impressive but that one character can keep you hooked. So you just might wanna do yourself a favor and at least check it out.