Looking Up At the Half-Moon - Videos 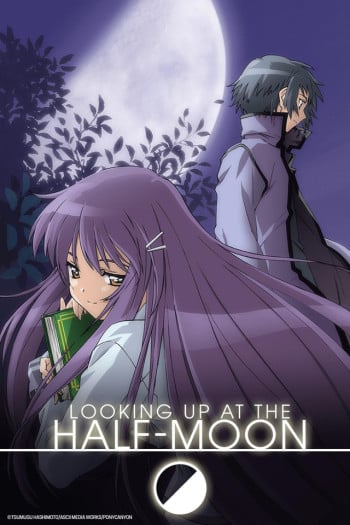 Looking Up At the Half-Moon Episode 3 - The Demise of the Ezaki Collection, And Then…

Yuuichi has managed to patch things up with Rika for the time being, but Dr. Natsume continues to try and drive a wedge between the two young lovers.

Akiko, The Girl, and Ryunosuke Akutagawa

The Inheritance of the Tada Collection

The Demise of the Ezaki Collection, And Then…

School Life for a Day

Our Own Two Hands

Anime-Planet users recommend these anime for fans of Looking Up At the Half-Moon. All available to watch right here, right now!

They both are about love, but the main characters have hardships that are similar. They both have a bitter-sweet ending but many cute moments in between.

Both involve teenage love in the face of one of the partners with a serious, life-threatening illness. Both explore the growth of characters as they prepare for a possible future without each other.

While Takemoto uncovers a path for himself, his love for Hagu is forcing him to lead a difficult college life. Takemoto, Hagu, and Morita are still trying to deal with their love triangle, and each of them must make a decision. Furthermore, Mayama must decide how to proceed with Rika, as she is leaving for Spain. The pain of love will continue to hurt many...

If you enjoy the serious storylines and the comical ones present in either series, then you'll no doubt enjoy them in the other. While we can enjoy the characters longer in Honey and Clover, you still get to feel the same emotional and sometimes strange lifestyles that these characters display in Hanbun. Both make you fall in love with the situations of each character and their well defined lives.

After having lived elsewhere for several years, Sana returns to the town in which he grew up in, and quickly begins to reacquaint himself to his surroundings and new high school. While there, Sana runs into his four childhood friends: Shuu, Shuri, Aoi, and Nanaka; but for some strange reason Nanaka gives him the cold shoulder. As he goes about his new daily...

Both of these anime focus on the value of life. The characters teach each other what has been missing from their lives, and you'll come away with a new look on your own life. Also, each anime is short, but they balance dark and lighter tones within the small amount of episodes. If you liked one, check out the other one.