Looking Up At the Half-Moon 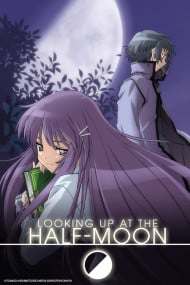 Yuichi is a teenage boy who was diagnosed with hepatitis; and as staying at the hospital is boring, he often sneaks out at night to hang out with his friends. However, each time he is caught by the slightly sadistic nurse Akiko, he just prolongs his stay at the hospital. After his most recent escape, instead of striking a punch or kick at Yuichi, Akiko says that she'll overlook his sneak outs if he becomes friends with 17-year-old Rika, another hospital resident. Rika doesn't open up to him at first, but she has her reasons: she has a weak heart; and though she may come off as selfish and rude, Yuichi looks beyond the surface to help both of them enjoy what life has to offer.

StoryOh the bittersweet joys of a hospital romance. At least, that’s what Hanbun no Tsuki ga Noboru Sora tries so desperately to express, but in the end it succeeds in only becoming a six-episode cliché. Yuichi and Rika are trapped within the sterile white walls of their own malfunctioning bodies – the former by a mild form of hepatitis, the latter a life-threatening cardiomyopathy. The two teenagers fall in love as a matter of course, and they spend their days discussing literature, arguing on the roof, sneaking out, and otherwise engaging in the mundane tomfoolery of a hospital life. As Rika’s risky operation looms closer and closer, Yuichi is forced to digest the possibility of losing his girlfriend forever. Yawn. A hundred yawns. As we all know, this arena has been explored countless times. With such a premise that rouses sleepy curiosity at best, Hanbun might have still salvaged itself from the mires of “been-there, done-that,” if only through an exceptional method of execution. Unfortunately, the show accomplishes nothing of the kind. Instead, it ends up an average mixture of tedious pacing, underdeveloped relationships, and lame mini-narratives. Something must be wrong if the sole reason I’m hoping for Rika’s survival is that I would be spared from Yuichi’s (and the handsome male doctor’s) tiresome mental breakdown that would inevitably come afterward. Hanbun no Tsuki ga Blah Blah blunders into an echelon only slightly better than the horde of stale fanfiction and rather worse than A Walk to Remember. The story’s saving graces are decidedly crammed into the last episode. The doctor ponders Yuichi’s ability to stay by Rika’s side despite the possible heartbreak: “Rika’s defects can never be completely cured. No matter how much he sacrifices, one day he’ll lose everything.” Nurse Akiko replies, “Dying without any happiness and dying with a smile, which is happier?” Well, at least it’s better than nothing.AnimationWith lighter hues and faded backgrounds, Hanbun’s visuals boast a subtler, dreamier look. Any show that translates to something as artistic as “Looking Up at the Half Moon” would naturally direct its powers into becoming a melancholic visual poem rather than a brilliant story. Unlike its premise, Hanbun’s animation shines in its modernity: Character designs are sleek (if a bit on the cute side like that of Zero no Tsukaima), falling leaves and night skies appropriately beautiful, and landscapes pleasingly hazy. While aesthetically apt, the animation is not ambitious. The movements are kept simple, safe, and slow, as if the animators were wary of exciting the viewers into contracting diseases themselves (minus the brief flashes of porn mags and the five-second undressing of a lonely model).SoundA noticeably sparse soundtrack sits between mediocre opening and closing themes. Tinkled out over prolonged stretches of silence, Hanbun’s ditties prove workable, if simplistic, and avoid the icky mawkishness of Korean dramas. On the other hand, they hardly capture the situation's pathos and instead sound like mere melodies from a music box. The seiyuu are bored from the beginning. Except for the yakuza nurse, no one bothers to wring their voices into interesting timbres. Yuichi and Rika sound hopelessly normal and are too reluctant to unleash their sniffling and groans of emotional turmoil. The doctor yells, screams in frustration, and speaks thoughtful lines, with all the sentiment of reciting a medical diagnosis.CharactersFor the sheer lameness of Hanbun’s plot, the cast proves to be a pleasant surprise, a collection of unadorned boxes that open up and reveal more goodies inside than previously assumed. Of course, six episodes hardly provides the fertile soil necessary for deep characterization to bloom, but kudos to Hanbun for at least planting a healthy seed. Much of what shapes a character is implied, and tragic pasts/back stories pop up as needed, awkward in execution but still important to the construction of the character. Yuichi remains a typical romance protagonist – young, determined, troubled, and a bit unremarkable. As the perspective comes from him, one can only view his love interest Rika as a bit of a mystery. Her past is glossed over and her volatile nature never explained. This would be perfectly fine, and maybe even preferred, if the two’s relationship with each other possessed enough assets to carry the storyline. Unfortunately, six episodes does not prove adequate time to develop their bond, unintentionally portraying their newfound romance to be more circumstantial than heartwarming. Hanbun succeeds the most obviously with Doctor Natsume. As he wrestles with his hidden problems, the mentality and context behinds his actions continue to unfold and accompany the show’s major theme. The characterization of Nurse Akiko is well-paced and subtle, and slight pains are taken to present motives and emotional backdrops for side characters – most notably, Akiko’s friend Misako.OverallFor those who crave an anime version of the ubiquitous “leukemia” romance, Hanbun no Tsuki ga Noboru Sora may be worth two hours of your time. A familiar comfort with a mildly arresting climax, the show avoids failure but still disappoints with its lack of power. Titles like 5 Centimeters per Second, Basilisk, or Saikano illustrate the concept of "doomed relationships" with far more emotional investment. 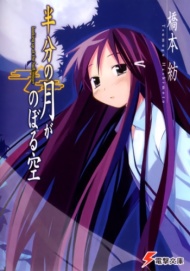 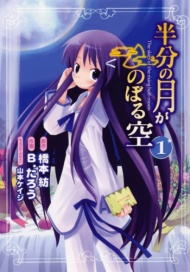