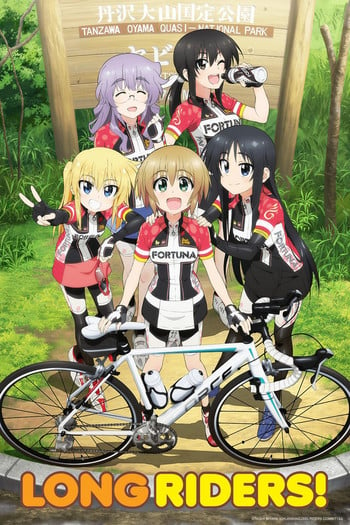 *It can’t be a surprise that I enjoyed this anime. I love cycling and LR! really focussed on the fun of cycling. Unlike its big brother YP, who focusses on the competitive side of cycling, LR! showed how fun cycling can be. Cruising the roads with your friends, getting to places you would otherwise never reach and setting and reaching goals. This anime created a step-up to cycling that was less steep than the one from YP, it made cycling reachable and I hope that people will be inspired to try it out after watching this anime. Because, as you know, in my opinion cycling is still the most beautiful sport in the world, it being competitive or recreative.

But LR! definitely also had its problems, the release of new episodes was delayed at several occasions and the final 2 episodes were delayed till February.

*And the episodes themselves weren’t perfect either. First of all I have to tell something about the animation and more specifically about the cycling animation. With that I mean how the characters and specifically the legs were animated when they were riding their bikes. It looked super robotic and everything but natural. Other cycling anime’s like YP and this season’s Minami Kamakura Cycling Club make the legs move in a way more natural way.

*Another thing about the animation. I think this anime wasn’t checked by someone who actually knows a thing or two about cycling. I can see that by the posture that the girls had on their bikes. It was most apparent with the smallest of them, Hinako. If you sit on a bike like that, you will break your back, her reach from the saddle to the handlebars was way to big. It was almost hysterical to look at.

*My final negative point is that the ultimate goal of this story being Ami riding the flèche is far from completed at the end. Ami still has a long way to go before she will be able to ride such a tour. I know because I’m currently training for my first flèche in September and that’s not something a newbie can do after just a few months of training. Most likely the original manga will go farther than this since it’s still ongoing today.

So as a conclusion, I really enjoyed LR! but it is a niche anime. People that aren’t into cycling or sports anime in general won’t feel the urge to watch this anime. But if you like sports anime I definitely recommend to give LR! a watch and maybe you’ll get bitten by the cycling microbe. So enough about me trying to promote cycling. LR! wasn't perfect, there are better cycling anime’s out there when it comes to story telling and animation. So I’m going to rate Long Riders! at 3 stars. But as I said, give this anime a watch if your a fan of lighter sports anime.

This show is a bicycle themed ''slice of life'' without a compettive element. It shows the up and downs of an unsportive plain but quirky college girl named Ami. Ami starts her new long distance cycling hobby beside her more experienced and level-headed friend Aoi. Quickly encountering girls of similar age with interest in the same hobby with more experience to guide her along her way. The series is mostly experienced through Ami's perspective teaching the audience a few things about bicycles along the way. Ami struggles physically and mentally in this series at times however the series is mostly a happy go lucky one without any long lasting drama.  The series has a few comedic moments but isn't a comedy either. It is definitely a slice of life show at heart. It is however very average and quite forgetable for a slice of life.

Animation wise this show is at best good enough and sometimes a bit mediocre. While the animation never got truly bad it had it's moments were you could pause the anime and shake your head. The bicycles are often CGI but overal the CGI in this show blends in well and isn't overabundant. It is generally avoided when making close ups of characters even while they are riding their bikes. However in shots were all girls are riding over and area and the background doesn't pan you can expect it obviously.

However the character designs aren't that unique or very cute. Ami is a rather plain but youthful looking ordinary every girl who outside of her personality could be thought as a self insert character by appearance.  Saki and Aoi have very similar "Yamato Nadeshiko" character designs being tall, developed and black haired. While Saki is goofy her goofy aspect is limited to her food intake which is a one note joke, surely. Hinako and Yayoi's character designs stand out as being completely out there by contrast. Both possessing unnatural hair colours, their entire character designs play off each other with Hinako being a ''twin-tail legal loli'' and Yayoi being a ''tall busty babe'' which gives us a two or three scenes of breast envy in this show for comedy.

Sound wise the music track is quite forgetable the ending theme is high spirited and fits the show but isn't anything amazing while the opening is very much what you'd expect from a slice of life show. The voice acting in this show is good for what it is with an experienced voice cast.  While some might argue with the voices of some characters they all were believable and got the general atmosphere that this series seemed to be going for over. From Ami's dramatic overreactions to Aoi's (fake) down to earthness, Hinako tsundere attitude, Yayoi's ''big sisterness'' and Saki's  sprotiveness and gluttony there aren't really any complaints there.

Overall, While a bicycle themed girls doing cute things show isn't an amazing concept theycould have done more with it. Simply put it was ''a little too slice of life'' for the most part with no real competitive element you have to use humour and ''cuteness'' or ''moe'' to keep things interesting. After watching this you can think it was fun but on the other hand personally I couldn't shake the feeling that it could have been so much more. Most of the shows drama and comedy is completely reliant on  Ami's  frequent silly expressions and dramatized emotional highs and lows. As amusing it is to see Ami make silly faces and how dramatic it is to face her own limits the entertainment element is stretched really thin due to the lack of variance. At some point Ami's facial expressions and her overreactions just aren't enough for comedy and what else there is to this series is limited and that is why this show just isn't all it coud have been which is quite sad in some ways as there was no bicycle show like it before it aired.

An enjoyable tale of friendship and discovery. Ami Kurata is a lovable character and her friend Aoi Niigaki makes a perfect fit. I was disappointed with some of the artwork in places. It felt like perhaps they were rushed or maybe giving a new artist a chance and it didn't quite pan out. That said, the overall tone of the show and the feel for the delivery is pretty good. I'd like to add that the character designs are fun and cheerful.

I feel like they could have made the show longer. It's really good, but I hate it when shows end with such a open ending. Also, I want to she her classmate riding with everyone. She seems like such a cute character (not that you see much of her), and I wish they had made an episode about the little sister because I feel like she was gonna ask if she could ride with her sister and her friends.