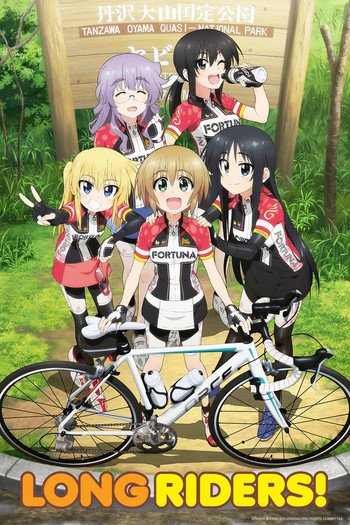 It's about cute girls that like bicycling and bicycles in a mostly slice of life setting with most of the time being used to make the audience appreciate the cute girls in question for being cute.

Both of these shows are about high school girl having fun riding bikes together. They are both laid back and a genuine pleasure to watch. Long Riders is a bit more educational, but the Girls Cycling Club has a live action tips section at the serving the same purpose. Still the focus is on friendship and fun.

Students finding a shared passion for riding. While Bakuon is set in High School and has a little more fantasy flair, Long Riders! is set at a more university age. Both shows still focus on the friendships forged and just enjoying the ride.

Exploring activities with friends. Centered on a group of friends who enjoy doing something together. Both shows touch on friendships and the strength of those bonds.