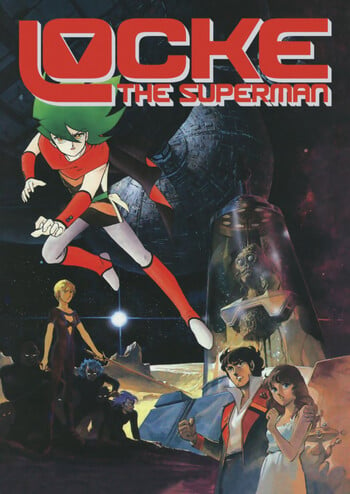 - Choujin Locke was quite a shock when I first watched it as a little kid. My parents rented the VHS for me because they thought it was some kiddy story. After all, the English title, Locke The Superman, made us think it was a Superman spin-off. Imagine my horror (and excitement) when I saw severed heads and rivers of blood filling the screen. It was my first encounter with the action/horror side of anime. And yes, it was one of the titles that made me love anime (my parents of course had freaked out and wanted to take me to a psychiatrist).
- As time went on, I have now seen hundreds of series that make dear old Locke seem rather peaceful. But it still doesn’t change the fact that for most of us 20+ otakus, he was a major hook.

ART & SOUND SECTION: 7/10 [Very detailed when it first came out but quite crude today.]
Its visual and sound effects are now poor and the action/gore scenes seem unrealistic and without any battle choreography. The character designs are very simple and may turn off most younger otakus who are accustomed to graphics like Final Fantasy: Advent Children and Karas . A special notice must be given to the camera angles and movement that are boosting the interest sky-high. It was a feat at the time it came out to present such a high-speed angle change. And besides all that, the atmosphere and the simplistic visual effects look fine at transmitting feeling to you.

STORY SECTION: 6/10 [The best, typicality has to offer!]
- Locke is an almost god-like human being who has lived for many centuries and has taken part in many battles. He now lives a simple life alone, while humanity has colonized most of the galaxy. But he is soon dragged back into action when he hears an old female friend/rival of his is still alive and plans something really big.
- The story goes on to evolve a powerful organization of espers (telepaths and telekinetics) who plan to rule the galaxy by blowing to pieces all inferior human beings. Add to that a sweet but powerful esper girl who wants to avenge Locke for killing her parents, a military man who can’t seem to stay away from trouble and an esper super chick with God syndrome.
- Nothing we haven’t seen before but the story is still presented in a very interesting way, with twists and revelations every now and then to keep you hooked. The ending is rather predictable but at least there IS one. Most series bust our balls with open endings but here you can at least see a simple closure. So, it’s classic but is also still kicking!

CHARACTER SECTION: 6/10 [They will not stick to you but you will surely sympathize with them.]
Although the characters have very stereotypical personalities, the gore and drama of each one boost their presence in the story. Plus, all characters mature (besides Locke who is already perfect!) and are thus not that stale and uninteresting.

VALUE & ENJOYMENT SECTION: 7/10 [Old but still kicking!]
Cult important for turning many average kids into otaku freaks. It is still interesting to watch, even if it is graphically surpassed.