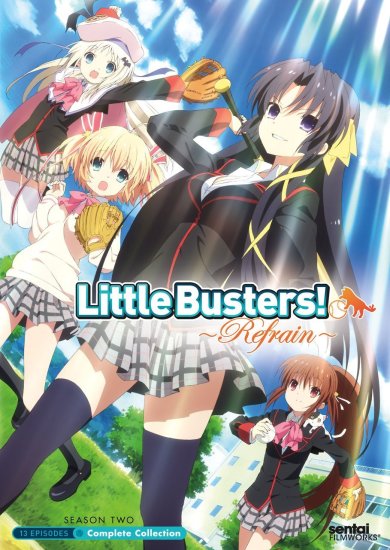 There aren't any spoilers in my review but it will give away somethings so this is just a warning before you read!!

At first you're watching it and it feels like your normal Slice Of Life styled anime. You get introduced to many characters then little things go wrong here an there. You really don't understand what's going on what so ever till about half way in you generally get a good guess on what this story is about. You would not expect the end result to be what it was though.

I found it a bit hard to follow at first, it felt a bit dragged on and all of a sudden you notice less and less characters and no one really talks about what happened or if they were even really there. You feel a bit tugged back and forth on the assumptions but over all this anime was REALLY well put together once you finally get to the last episode.

It's suprisingly a very dark anime. Well I should really say it has very dark elements to it.

True friendship and growing as a person

This is a review about season 1 and 2, because you have to watch both to feel the emotional impact. Basically, the first episodes begin with a hilarious comedy with the heartbreaking moments and past scars increasing with each episode until one arc is over. Especially, the last two arcs(Haruka and Kud) where so impressing and touching, but maybe due to the lack of OST timing one step was missing to make me cry. However, after overcoming so many hardships and growing attached to your characters, season 2 comes in. Even if there are people saying storytelling and tension of season 1 were nothing special and impressive, most of them will agree that season 2 is on a whole new level.

Little Busters! began with the question what you would do after school time is over and all the people dear to you might vanish from your life only to realize with season 2 that the intension of the story was more meaningful:

What limits are you ready to break to help your friends ?

Characters and their behaviors which seemed plain in season 1, will shine in season 2. Most noteworthy for this character development would be Masato, seeming like the Sunohara of Little Busters!. But, with the context of season 2 you will see there were reasons for his behavior and that he might be the strongest of them all, not only physically. Of course, all the others of the Little Busters(especially the old members) have an amazing development as well(oh, you will really like Kyouske's development), but it would be better to see it for yourself. With season 2 the timing of OST was also corrected: Although they use the same OST as in season 1 they know when to use is it now. I don't know wether it would have had such an emotional impact on me if there hadn't been Soundtracks like: Song for friends and Faraway. Jun Maeda is a genius and quite a sadist(look for the meaning of the lyrics after watching the anime and you will see he perfectly summarized the whole anime, with all his compositions, especially with the 2nd op)

"In short":
Of course, it has its flaws like: some questions being left unanswered for anime-only viewers(e.g. Why does Kengo get so emotional when he sees Miyuki again ?), the lack of romance(e.g.the really open confession of one character: like he/she thought: We are from opposite gender! Hell, why not ?) and the fact that J.C. didn't even try to "shroud things in mystery" sometimes.^^

So why 9.5 of 10 you ask if it has so many flaws ? Because when it is good, it is good at an extremly high level(characters, OST, plot, tension, emotions and everything else I have pointed out) and that overweighs the flaws greatly. Furthermore, the animation studio was clever enough to realize that the main intention of the story is about friendship and thus being able not to give this anime a feel of a dating sim. I also liked how they were able to create this tension and emotions with cliffhängers and turns building those emotions up towards the final episodes where you finally break down with your growing attached to characters.(The voice actors did a really good job here).Even now when I know what is going to happen, the emotional moments of season 2 haunt me and not many animes or other media can do that after revealing the whole plot. I have looked for an anime which could proof me that I didn't become emotionless as I was not on the verge of crying when I saw the final of Anohana^^. In fact, the last time felt such an emotional impact from an anime that I could not sleep from overexitement and sadness for a few days was, when I watched Angel Beats' final and one certain episode of After Story.

This is definitly an anime that can compete with Clannad+After Story....No, I would go even farther: Little Busters! + Refrain is the best work of Key so far. The animation studio J.C. did also quite a good job adapting this visual novel, even though some people complain that many things were left out. However, you have to keep in mind that they could only afford for 13 episodes and did still an excellent job except that the "shrouding in mystery part" could have been done better. But, the anime did its job for me: It made me feel for the characters and taught me many important values, and in the end that's what only matters, doesn't it ?

To end this really long review, I can only say: Omega good job, Key !!!

Side Note: It would be nice if you could raise my views of my anime piano covers:www.youtube.com/channel/UCwR9jKlyV-Sby8IRW2gXJgQ

This second season has a completely different vibe compared to the first: it's much darker. There's this kind of ominous and oppressive atmosphere that throws you off balance coming after a first season that was much more bland and brimming with positive feelings. For most of the series you have no idea what's going on and you can't understand why all of a sudden Kyousuke has become the villain. But at the end there's a really good explanation to everything. So the story is definetely a satisfying one in terms of content, consistency and pacing. It's not very original - I was reminded mainly of Steins Gate, but nonetheless it makes sense and everything fits into place. The ending isn't bad and it's a happy one. I think that if it had ended at episode 11 it would have been much more heart-breaking and maybe I would have given it higher marks: happy endings aren't memorable.

As for the characters, Little Busters Refrain focuses on the main characters that in the first season were neglected: Kyousuke, Masato, Kengo, Rin and Riki. And at the beginning there are also two episodes dedicated to Kurugaya. This time I really cannot complain about the characters, they are presented and developed much better. Personally, I don't really like Riki that much as he strikes me as insubstantial, I think Kyousuke does a much better job of being a leader and is a more interesting character.

Animation and music are good.

Little Busters is the story of the friendship between a group of 10 high school students. The first season serves mainly as an introduction (a long one, actually, as it counts 26 episodes) where you get to meet the cast and you get a bit of the backstory; it focuses mainly on the individual stories if the girls who join the baseball team after it is founded by its original 5 members. In Little Busters Refrain the girls who dominated the first series are very much in the background and they only show up at the end; in Refrain the spotlight is on the 5 childhood friends and their relationship, how much they care for each other and how far they are willing to go to protect their friends and loved ones. It's emotional and touching. It isn't perfect, but it's a good watch and I do recommend it.

It is hard to explain the hard pivot in mood between the first season of Little Busters, and the second, LB Refrain.  Season one was a lark, with the sense of the comedic and the seeking of fun experiences.  But Refrain was somber, serious, and a trifle too surreal.  The character of Kyousuke, leader of the Little Busters, went from carefree to draw enough collateral damage to make one suspicious of his intentions.  What does he want for sister Rin and best friend Riki?

It helps when one remembers that originally Little Busters was produced as gameplay.  The main character of this VG was Rin, Kyousuke’s introverted sister.  To learn the ‘secret of the world,’ Rin had to battle through several levels, from pushover Komari to formidable Kurugaya.  And it was the story arcs of the girls which fueled both seasons.  Rin’s shyness, Komari’s fragile happiness, Haruka’s mischievousness, Kud’s sense of inferiority, Mio’s passivity, Kurugaya’s need for love … all these supplied intricate plot details, even though their weakness was in their improbability.

Refrain would be continuing these wildly imaginative arcs but add to them all the theme of time in stall, of the Little Buster gang reliving the good times to avoid the bad times in an endless school semester.  It is a solution that fails, for little by little the girls vanish into oblivion, leaving just the original five, Kyousuke, Riki, Rin, Masato, and Kengo.  And friction between these friends is on the rise, and Riki suspects that Kyousuke is behind it all.  But … why?

The animation technique is flawless, as reality struggles in a surrealist setting which fades to simplistic white as the pseudo-world collapses under the weight of truth.  Characters in full color rush through this void to learn the tragic accident which caused all this to happen.  The truth is ugly, but Riki and Rin must be mature enough to face this ugliness and ... wait, they don't accept it?  What can they do?

The music become introspective as we reach the final episodes, where Riki and Rin, always under the protection of Kyousuke, must learn to be the protectors themselves.  This is what you see from the opening theme, of Riki in a state of growing up, as we learn what caused the mysterious narcolepsy which comes upon Riki in dire moments.  As we learn the root cause of what made Rin horribly shy, and why the Little Busters were created.  Refrain gives us the backstories of Masato and Kengo’s entrance into this little family of wounded souls.  A gang that has learned to enjoy each other’s company and give one’s all to preserve this friendship.

But it is the storyline which will always take a huge hit.  The weakness of the first season had been the plotlines, highly unlikely story arcs centered on the problems of the girls of the Little Busters.  But the second season resolves the unlikely by making the whole situation surreal, a huge gamble which may be adjudicated by the ending, the search for the happy friendship that binds the members of the Little Busters as they gaze pensively (and appreciatively) into the distant oceanscape.  A blissful immersion into the blue of sky and sea, a thankful preference that such did not become black and bleak.