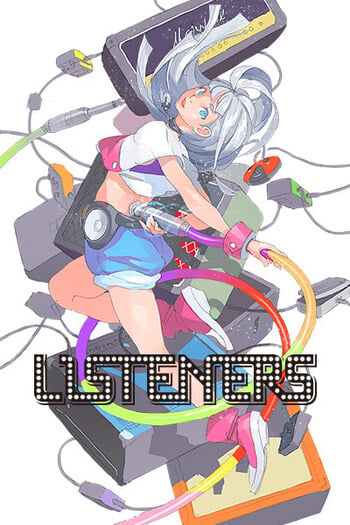 (This is my third time writing this review because I keep accidentally deleting everything, so third times the charm!)

Listeners is a show that started off very weak but ended fairly strong.

The biggest downfall of Listeners, was how much hype that it had received before episode 1, because it was advertised, really well, and the concept sounded very exciting. This anime just wasn’t able to reach these high expectations, and so many people dropped it very early.

The major problem that people had with the show was the awful eye sickening mixture of 3D and 2D animation, that I’m sure any long time anime fan knows way too well. This was a problem that did get fixed overtime, and towards the end of the series, it no longer burned your eyes out, and it actually looked well done at times. That’s one thing I will mention a lot through this review, improvement, because this anime, in the short amount of time it aired, did show a lot of improvement throughout its course, which is one of its charms.

I am a big animation nerd. I love to animate, and I love to watch animations. This anime didn’t have any Sakuga, or anything interesting animation-wise, but the art style was well crafted. I really enjoyed the aesthetics of the background art, and the animation style of the EDs.

That’s right, I said EDs. Every single episode had their own ED, and they were all pretty well done. (My favourite one is episode 10’s ED!). The soundtrack was pretty well done for the budget they seem to have had, and it fitted the show nicely. Talking about music, this show’s whole theme is music, in a world, where music doesn’t exist anymore, which was an actually pretty interesting concept, that I think they portrayed pretty well. There are a lot of music culture references as well. One of the OST albums is a Beatles parody.

The world-building and character-building is really really well done, but I felt that the writing was trying too hard to show off as much of this world that they could, without seeming to impact the story (though in the end, it DID impact the story, but it just felt way too episodic in the beginning). The main characters travel to different towns, and every town has their own distinct feel, and their own cast of characters, and as someone who takes a great interest in world building, I think that they honestly did a pretty good job.

Now comes to me advertising the Anime Lottery Game, because I’m going to be honest, if it wasn’t for the game, I would have dropped this anime really early on, because I found parts of it really really painful to watch, but I am glad that I was forced to stick through it, because I honestly really really enjoyed the last couple of episodes, and I wouldn’t have been able to experience that otherwise.

Would I recommend this anime to a new anime fan? No, because it’s not a show that’s going to draw you into the vast world of anime, but I would recommend it to a more seasoned fan, who can handle being patient enough with some really dry episodes, and wait for the way better-done ones. I also would recommend this to anyone who just really likes musical references, because this show is full of them.

In a Nutshell
Set in a post-apocalyptic world that has been terrorized by shadowy creatures known as Earless for far too long, the humanity is now to battle their inhuman enemies. The series focuses on a boy called Echo, who wants to join the fight against the Earless.

FLCL on Shrooms
It is quite obvious that something like ‘a boy finds a mystery girl and together they save the world’ sounds way too overused. Here, however, the show at least gives the girl with amnesia a personality. Let us see if this show even tries to be ‘somewhat’ unique. The boy is your Takkun (FLCL), or Simon (Tengen Toppa Gurren Lagann), in other words, weak, nerdy boy, who want to escape and change something in his life. The problem, however, is that he shows even less development than Takkun and Simon, he is just your average Joe that you have seen 100000 times already. The girl, μ, has an amnesia (I am not going to stress the fact how many times it has been used in other series). She looks like a big human amplifier, do not ask me why, Japan is weird, yes. While she does have 0 recollection of what she is, she does not care about it and keeps fighting. People like her are called players, and they are known for bringing music into the world. Unfortunately, players have been banned from the town Echo lives in, because earless monsters might destroy it, if they were to cooperate with any players.

It Is Just Way Too Generic
The show does focus on music, which is something you will rarely see, ehem Macross, ehem and it does manage to be somewhat unique, but it just fails to be anywhere entertaining. A series that focuses on music, has such a weak OST, please. Listeners does use mecha fights and does it quite often, I must say. But these action scenes are just way too boring. I mean, mecha fights must be epic, mecha means epic and here they are just anything but epic.

Too Many Things Going On
Listeners is a great example of a show that tries to be everything, but fails to be good. You are introduced to the world of Listeners, however, you do not get a normal explanation about where the Earless came from, what the mechs are exactly, where Players came from, who are the Earless, what they want and so on. It is perfectly fine, if you do not want to focus on the actions scenes, no problem. But do pay enough time to the world-building and characters. Already the main protagonists, let us be honest, are nothing special, but the show introduces more and more characters that do not receive enough development, as well as the screen time for the viewer to like them, to understand what they are and what they are trying to achieve and many many more.

Not Recommended (5/10)
But it does not mean that you should not watch this series. It is not bad, it is just average. I will not try to deny the fact that it did try to be unique and it could have become quite a successful show of this season, if more attention has been paid to the characters. However, this show is just way too generic, it shows way too many things, I have seen too many times already, so seeing it one more time was not quite what I was looking for.

-
(Here are my final thoughts/RANT on this series, TL;DR - It is trash)

Wow, so, have you guys ever had that experience where you go look at an anime’s page and think ”wow that’s a really low score, but the show couldn’t actually be that bad, right?” so you give it a shot, and after the first 2 or 3 episodes, you think “ok, this is pretty bad, but it’s not as bad as the rating implied” but then you get to a point in the series and you realize “HOLY FUCKING SHIT, no, this really is as bad as the rating implied, I didn’t think it could get worse, but somehow it has” that summarizes my experience with this show in a nutshell. This is one of the first times in a long time where I actually regret watching an anime, because I wasted literally hours of my life consuming this GARBAGE.

-
Like I GENUINELY do not understand HOW can an anime be this bad, this is made by the same studio that has brought us so many amazing anime, and the main scriptwriter for this series is the exact same guy who has written more than a dozen episodes of Eureka Seven, so how, HOW can this anime be so bad with the talent that is behind it, I genuinely do not know. I stepped into this expecting it to be at least better than Gleipnir, but I somehow walked away with this now being the worst anime I have completed this year.

-
On the bright side the music, the animation, and the art style for the series are all top-notch and if they ever release creditless versions of all of the EDs they will probably make for great material to make amazing AMVs out of. So while in concept the theory for this show sounds interesting, the execution is so terrible that you are honestly amazed that it could be this bad. At first, you get at least some enjoyment out of watching a trainwreck happen, but at a point in this series it just doesn’t matter anymore, and you just want to jump ship just like the show already done since episode one, but you’re already 3/4 of the way through, so you can’t leave it unfinished, so now you just have to buckle down and watch this garbage.

-
Anyways my rate/review it’s over, I’ve said all I want to say, if you want to talk about it go for it. So if I had to rate this series I guess I would give it a rating I have not given in more then 2 years, a 60/100, because the plot is so incoherent and honestly rushed that I would need to look at the reactions for every episode to even get a semblance of what the fuck is going on. So yeah, do yourself a favor and don’t watch this anime🙏🙏

-
P.S. in case you are wondering, the only “good” episode in this series is episode 7, and that is because it is almost completely separate from the main plot, which is why it actually works.

i loved this anime!! it's a pick me up that many anime watchers need after some of the more intense and heart wrenching animes i've watched. if you are more into those, this is a good day or two binge/cleanse show after them!! plus the animation and visuals are absolutely gorgeous. the characters are adorable too. will definitely be rewatching!!

The anime is ready cool. I love the music legend references that they use. I like that the concept of the story is different than anything I've ever seen before. It is a music-based anime but as stated before in other post it has a post-Apocalyptic mecha thing going on. Definitely worth watching if you want something different